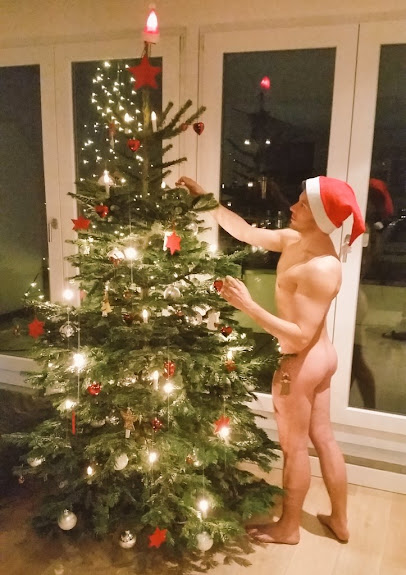 you are so little

who found you in the green forest

and were you very sorry to come away?

because you smell so sweetly

i will kiss your cool bark

and hug you safe and tight

just as your mother would,

only don’t be afraid

that sleep all the year in a dark box

dreaming of being taken out and allowed to shine,

the balls the chains red and gold the fluffy threads,

put up your little arms

and i’ll give them all to you to hold.

every finger shall have its ring

and there won’t be a single place dark or unhappy

then when you’re quite dressed

you’ll stand in the window for everyone to see

and how they’ll stare!

oh but you’ll be very proud

and my little sister and i will take hands

and looking up at our beautiful tree

Edward Estlin Cummings (often styled e e cummings) was born in Cambridge, Massachusetts, on October 14, 1894. He began writing poems as early as 1904 and studied Latin and Greek at the Cambridge Latin High School. He received his BA in 1915 and his MA in 1916, both from Harvard University. In his work, Cummings experimented radically with form, punctuation, spelling, and syntax, abandoning traditional techniques and structures to create a new, highly idiosyncratic means of poetic expression. Later in his career, he was often criticized for settling into his signature style and not pressing his work toward further evolution. Nevertheless, he attained great popularity, especially among young readers, for the simplicity of his language, his playful mode and his attention to subjects such as war and sex.

The poet and critic Randall Jarrell once noted that Cummings is "one of the most individual poets who ever lived—and, though it sometimes seems so, it is not just his vices and exaggerations, the defects of his qualities, that make a writer popular. But, primarily, Mr. Cummings's poems are loved because they are full of sentimentally, of sex, of more or less improper jokes, of elementary lyric insistence."

This is one of my favorite Christmas poems. It reminds me of the little tree in "A Charlie Brown Christmas." Thanks for posting it. Merry Christmas!

Monty, I thought of the Charlie Brown Christmas Tree too when I read this. I had not known this poem before I came across it looking for appropriate poems for this time of year. I have a true classic that I will be using for next week's poetry post.

I think that we may be on some sort of psychic parallel. I write most of my blog posts on the weekend before they post and I stumbled upon this beautiful poem which will post on my blog on Thursday afternoon. I credit another site I found that published this poem about 7-8 years ago otherwise I would've linked to yours.

BosGuy, we must be on some sort of psychic parallel. Maybe it's because I've been in New England too long, LOL. I found this poem searching for Christmas poems on poets.org. The Academy of American Poets is my go-to poetry source.