Is It Time to Embrace the Dangly Earring? 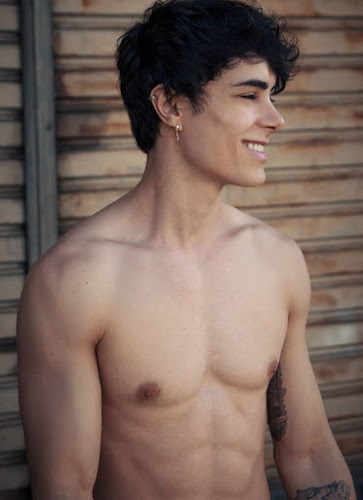 I am going to admit it, I downloaded TikTok because I saw a TikTok video on Twitter of a really hot guy doing a sexy rope trick. There is no shortage of hot men on the app. After I downloaded it, I find myself going down the rabbit hole of TikTok videos whenever I get bored. There are lots of cat videos, which as a cat lover, I find very cute. Then there are the videos of teachers telling funny stories of students, many of which I can relate to. Of course, there are lots of drag queens, and I can’t resist watching a good drag queen. There are also the dances that are usually cute at first but then they get a little redundant. Finally, there is what seems like a never-ending supply of gay men on TikTok. It’s a total thirst trap. There are some sexy straight men too, but I mostly prefer the gay ones. A lot of the videos, which are all under one minute, are humorous, while there are some that always have more serious content. I usually open the app for entertainment, not a lecture, but I digress.

The point of this post is not really about TikTok, but it needed to serve as a sort of introduction to the topic at hand. One of the things I have noticed with a lot of the young gay men is that a large number of them are now wearing dangling earrings. Honestly, it’s not something I find very attractive. Some of the earrings that loop to another ear piercing higher up their ear remind me of Bajoran earrings from Star Trek. If you have ever watched Deep Space Nine or any episodes with Ro Lauren on The Next Generation, you know what I am talking about. The Bajoran earring was an elaborate piece of jewelry traditionally worn on the right ear by the Bajorans, male and female alike, as a symbol of their faith. Each person's earring was individualized and bore the symbol of their family. 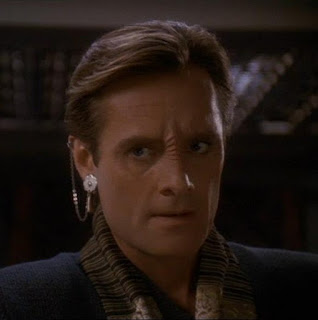 I know these guys aren’t wearing the dangling earrings as a homage to Star Trek, but I have to wonder: what is with this trend? Naturally, I decided to do a little research on the subject. According to an August 2019 article “It's Time to Embrace the Dangly Earring” in GQ:

The trend traces most obviously to George Michael, who wore a single dangling silver cross during the 1980s. (Mr. T’s trailing feather hoops also deserve a mention.) But let’s start further back, in Elizabethan England. According to priest William Harrison’s 1557 text Description of England, some men—specifically “lusty courtiers…and gentlemen of courage”—at that time were wearing large earrings made from “gold, stones, or pearl.” (Harrison editorialized that earrings “rather disgrace than adorn their persons.”) Dangling pearl drops were worn by Sir Walter Raleigh, and, later, by King Charles I, whose taste for luxury goods played no small part in the English Civil War and his subsequent execution. Charles, who acquired his rare ovoid pearl earring at the age of fifteen, actually kept the earring on during his own beheading, after which it was removed and sent to his daughter and eventually ended up in the collection of an East Midlands estate.

It has also permeated internet culture, with dangly men’s earrings popping up in TikTok videos and various memes. Zach Clayton, a 19-year-old internet celebrity who lives in Los Angeles, recently observed on Twitter: “I just went on TikTok for the first time in so damn long and every dude on there has one dangling earring.”

In the same article, The New York Times goes on to discuss how the trend has been co-opted by fashion designers:

Fashion designers have been quick to co-opt the trend, perhaps sensing that men’s dangly earrings are well suited for our nonbinary gender moment…Dangling earrings were sent down the runway at numerous men’s wear shows earlier this year, including at Celine, Balenciaga and Gucci.

While this trend may have been around since the 1500s, it seems that until recently, it was not something that was fashionable for the average person. At first, it was something that the upper classes wore, then devolved to pirates, and by the 1980s to rock stars, to be more specific, George Michael. In the current social media frenzied climate, it seems to be a fashion trend for many, but for some it is also a statement about non-gender conformity. While it is not a trend I think looks good, I think we will see more trends that bring attention to non-gender conformity as the LGBTQ+ community becomes freer and more open to gender expression and the world become more accepting of differing sexualities.

Joe, interesting, as you say, how the fashion for ear rings has changed for men - from being an absolute taboo to a fake diamond stud being common among straight young men to dangling ones as a statement for gays (though I have known straights also wearing them). Being somewhat claustrophobic, I can't stand wearing any personal adornment but chacun a`son gout, as the French say. But fashions change so quickly. I wonder how long the current fad for close cut beards among young men will last? Roderick

I hate this trend. These dangling earrings can make even the most attractive guy unattractive, in my opinion. Grant it, I like masculine men and these remind me of geishas or belly dancers.

Very interesting topic. I've always wanted to pierce my ears and get earrings. Just a simple diamond stud would be fine. I have never gotten up the nerve to go through with it. I learned about ear cuffs, they give your ears the appearance that your wearing earrings and it does catch peoples eye. Dangly earrings aren't my thing.

Social media is more addicting than sugar. TikTok is all the rage I've seen some videos that were posted via other platforms but don't have the TikTok app due to privacy concerns, plus it's not like I need more social media. Sometimes you just need to look at people being silly or find a good looking guy (aka eye candy) or take a glimpse into a different world to take your mind off your own. Social media is a great distraction especially with the circumstances in the world now with COVID.

Have a great evening!

Roderick, I do wear a few personal adornments. I like that my nipples are pierced, but only a few people get to see them when I take off my shirt. I've also never got any complaints from guys who realized I have them, as they all like to play with them. I'm not sure I would want my ears pierced. As for the close cut beards, I hope that is a fad that goes away soon. It does look ok on some guys, but most of the guys in Vermont have big bushy beards that I absolutely hate.

Cody, I mostly like masculine men too, but I've dated some who were a little more feminine. I even went out with a drag queen once, though he wasn't in drag when we went out. He still wore a little make-up and jewelry. We never went out a second time, but he's always nice when I see him in drag and if he is able to, he goes out of his way to say hello. In the few times we've been at events, and he was too busy as an organizer, he always messages me later to say he was glad to see me.

Jeremy, while I have occasionally thought about piercing my ears, I have only stuck with piercings that can't be seen when I am clothed. If I did get my ears pierced, it was be to wear a small stud, nothing more elaborate. I had a boyfriend once with a tongue piercing, and I know why they say people have that done, but honestly, it made no difference to me when he was doing things. I couldn't tell he had it in his tongue. Social media can be addicting. I used to check out Facebook a lot, but right now my conservative friends and family down South just make me angry, so I have been staying away from it. Facebook just tends to remind me of what all is wrong with the world right now and is in no way a diversion from it. Besides enjoying TikTok, I also enjoy Instagram, especially Leslie Jordan's videos.

If you're Lakota, the dangly earring and the hoop have long been a thing.

But now I'm wondering how gay men can get on TikTok. The People's Blog Platform follows the rules of the People's Republic.

And how is it different from the now-defunct Vine?