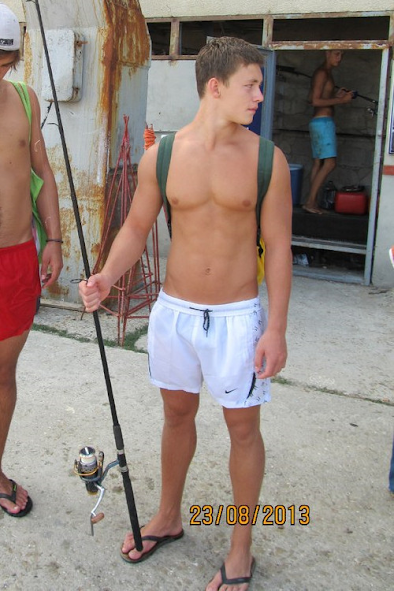 A man spends his whole life fishing in himself

for something grand. It's like some lost lunker, big enough

to break all records. But he's only heard rumors, myths,

vague promises of wonder. He's only felt the shadow

of something enormous darken his life. Or has he?

Maybe it's the shadow of other fish, greater than his,

the shadow of other men's souls passing over him.

Each day he grabs his gear and makes his way

to the ocean. At least he's sure of that: or is he? Is it the ocean

or the little puddle of his tears? Is this his dinghy

or the frayed boards of his ego, scoured by storm?

He shoves off, feeling the land fall away under his boots.

in his ears. It could be today: the water heaves

It's all so pleasant, so comforting--the sunlight,

Night with its concealments, its shadow masking all other shadows.

Night with its privacies, its alluringly distant stars.

Joe, and what is the situation with your tooth and face today? Glad to know about the considerable improvement yesterday.
Do you ever go to Barre, about the existence of which I had no idea, but which Wikipedia informs me is more populous than Burlington? Just curious, Roderick

Roderick, My face is much better today. There is still some pain, but nothing like yesterday. As long as no pressure is put on the right side of my face, and I take Tylenol, it is generally OK.

As for Barre, I do go to Barre occasionally. My favorite sushi restaurant in central Vermont is located in Barre as is my oral surgeon. I don't go to Barre much. Usually, I end up going to Berlin for most things. Berlin sits between Barre and Montpelier (you don't really know when you leave one and enter the other), and is the more commercialized of the three. The grocery stores and mall are all in Berlin.

There are some interesting things about Barre. It is known for its granite deposits (it has a large Italian population due to Italian immigrants who came to mine the granite and work as sculptors), and it is home of the Hope Cemetery, which is more like an elaborate sculpture garden with people buried beneath the sculptures than a cemetery. It's really beautiful and fascinating. I've also been to the Barre Opera House a few times for various events such as the Vermont Burlesque Festival. However, Barre has a lot of drug addicts, so it is not always the safest place.

I like pictures like this: a really good looking guy actually out in public engaged in normal activity. It's real, not just a photo shoot.

Naturgesetz, I prefer pictures of real guys too over photoshoots and models, but sometimes really good ones are hard to find.

I uunderstand. I wasn't complaining about other pictures. It's just that I keep coming back to this one and wanted to thank you.

Naturgesetz, thank you. When I came across this picture, I knew I needed to find a way to use it, and this poem seemed to fit the bill.