Now the first day of the week Mary Magdalene went to the tomb early, while it was still dark, and saw that the stone had been taken away from the tomb. Then she ran and came to Simon Peter, and to the other disciple, whom Jesus loved, and said to them, “They have taken away the Lord out of the tomb, and we do not know where they have laid Him.”

Growing up, I was always taught that Easter was the most important celebration in all of Christianity. The death and resurrection of Jesus are the most important events and a foundation of the Christian faith. Whether Jesus rose from the dead is the most critical question regarding the Christian faith. The resurrection of Jesus was part of the plan of salvation and redemption by atonement for man's sin.

When I think of the arrest, crucifixion, and resurrection of Jesus, I always think of how terrified his disciples must have been. Rome was the greatest authority in the known world for them, and Jesus had been arrested by the Temple guards of the Sanhedrin, the representatives of Imperial Rome’s authority in Judaea. They had to be asking themselves: would they be next? would they be tried and crucified? what would become of them? how could they go on without their leader and Savior?

They had seen their Lord and Savior die in the most brutal form of execution in the Roman Empire. The crucifixion had been a frightening experience according to Luke 23:44-45, which says, “Now it was about the sixth hour, and there was darkness over all the earth until the ninth hour. Then the sun was darkened, and the veil of the temple was torn in two. Following the world around them literally turning to darkness as their Savior died, Luke 23:46 tells us that, “And when Jesus had cried out with a loud voice, He said, “Father, ‘into Your hands I commit My spirit.’ ” Having said this, He breathed His last.” Their Savior had died. I would have felt like my life was over.

Even though Jesus had told them he would be resurrected, the disciples did not understand. In John 2:19, Jesus “said to them, ‘Destroy this temple, and in three days I will raise it up.’” The disciples thought he was speaking literally of the Temple, just John 2:21 tells us, “But He was speaking of the temple of His body.” Even if they believed that Jesus would rise from the dead, they thought he was speaking of living in eternity in Heaven with his Father or of a literal rebuilding of the Temple. It was not until they saw him in the flesh that they believed in a literal resurrection. So, the fear of his death was real. They were in a heightened state of fear during this time.

Their fear is evident in the discovery that Jesus’s body was missing from the tomb. Matthew 28:1-7 describes the scene:

Now after the Sabbath, as the first day of the week began to dawn, Mary Magdalene and the other Mary came to see the tomb. And behold, there was a great earthquake; for an angel of the Lord descended from Heaven, and came and rolled back the stone from the door, and sat on it.  His countenance was like lightning, and his clothing as white as snow. And the guards shook for fear of him, and became like dead men. But the angel answered and said to the women, “Do not be afraid, for I know that you seek Jesus who was crucified. He is not here; for He is risen, as He said. Come, see the place where the Lord lay. And go quickly and tell His disciples that He is risen from the dead, and indeed He is going before you into Galilee; there you will see Him. Behold, I have told you.”

Even after Mary Magdalene told the others that she had seen the risen Lord and that he had spoken to her, they were still afraid: John 20:19-20 tells us about this continued fear:

Then, the same day at evening, being the first day of the week, when the doors were shut where the disciples were assembled, for fear of the Jews, Jesus came and stood in the midst, and said to them, “Peace be with you.” When He had said this, He showed them His hands and His side. Then the disciples were glad when they saw the Lord.

The sight of the risen Jesus must have been a wondrous sight for the disciples. Not all would believe it was Him. Matthew 28:17 says, “When they saw Him, they worshiped Him; but some doubted.” The Apostle Thomas (Doubting Thomas) refused to believe that the resurrected Jesus had appeared to the ten other apostles. When Jesus appeared to him as related in John 20:24–29, he still did not believe until he could see and feel the wounds received by Jesus on the cross.

The joy that the disciples must have felt when they realized that Jesus had risen from the dead must have been ecstatic. Jesus then gave them the Great Commission. Matthew 28:18-20 says:

And Jesus came and spoke to them, saying, “All authority has been given to Me in Heaven and on earth. Go therefore and make disciples of all the nations, baptizing them in the name of the Father and of the Son and of the Holy Spirit, teaching them to observe all things that I have commanded you; and lo, I am with you always, even to the end of the age.”

This Easter and every day, we should remember what Jesus commands of us. We should not forget the love and sacrifice that Jesus brought to this world as our Savior. Jesus is with us always, and as corny as it may be these days, all our actions should be influenced by asking ourselves, “What would Jesus do?” Jesus showed partiality to the downtrodden, the oppressed, and those who society cast aside. We can’t hide in fear but live proudly in a Christ-like manner. Jesus taught that all are accepted and loved by God, not just those who follow the narrow-minded beliefs of fundamentalist Christians, who have lost what it means to be followers of Christ. Jesus died and suffered for us to love and accept our fellow humans and to live by His example. If we hate, show prejudice, or reject those who do not believe as we think they should believe, we are not following the example given to us by Jesus.

MAY THE LOVE OF CHRIST BE IN YOU.

On a happier note, below you will find the cutest Easter card that I received from my friend Susan. It just made me laugh. As the card says on the inside:

Hope you find lots of fun this Easter! 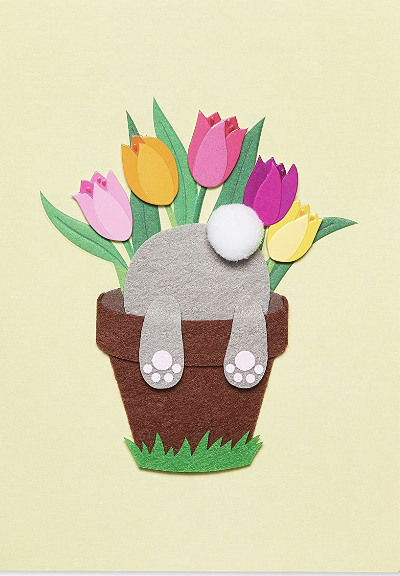