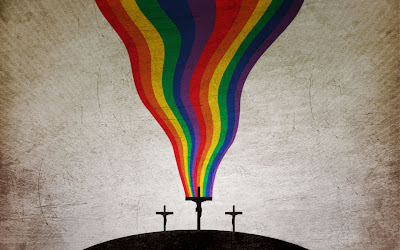 I was reading Davey Wavey's blog Break the Illusion yesterday, and came across this blog post:


The Cross: A Symbol of Love or Hate?

When I was driving into Canada, I passed a giant white cross on the side of the road. It was likely erected by one of the local congregations, and soared some 50 or 60 feet into the sky. For those that built it, the cross is a symbol of their faith. For me, the cross evokes a lot of mixed feelings.

On the treadmill last night, I caught a few minutes of a CNN interview with an openly gay woman named Barbara Johnson. At her mother’s funeral, the priest denied Barbara Holy Communion. He said:


I can’t give you Communion because you live with a woman and in the eyes of the church, that is a sin.

To add insult to injury, he left the altar when Barbara delivered the eulogy – and refused to attend the burial. On one of the hardest days of her life, the priest’s actions added insult to injury.

I know that the cross stands for many beautiful and compassionate teachings. But as a gay man who went through both Catholic high school and university, I’ve seen so many individuals and organizations hide behind the cross as a justification for their hate. After a while, it takes its toll on you.

When I see a cross, the teachings of love and compassion are overshadowed by the stories of people like Barbara Johnson.

I am not Catholic, nor do I claim to understand everything about Catholicism.  However, in my church (Church of Christ) where I am the person who passes around the communion every Sunday,  I have never denied someone the right to take communion.  It is their choice, and it is a choice between them and God.  That being said, what struck me about this blog post is that Davey wrote that for him "the cross evokes a lot of mixed feelings."  When I see a cross, it reminds me purely of the sacrifice that Jesus made for our sins.  Instead of having mixed feeling about the cross, about religion, or about God, I feel great sadness for those Christians who use the cross and twist the words of God to something that is negative.  Christianity is a positive religion, and when Christians make it a negative religion, then they are doing just what being negative means, they are making it less.  It is simple mathematics, 1 + 1 = 2, but 1 - 1 = 0, when you add negatives into the equation, you are taking something away.  In my belief those who use Christianity in a negative way are taking God out of it, and thus are moving further away from God and his love.

A friend of mine recently gave me a book God vs. Gay?: The Religious Case for Equality which I am reading that presents a religious case for equality.  As you all know, I have had a rough week, and I have not gotten far into God vs. Gay? but I have read a little of it each night.  When I am finished with God vs. Gay? I will write more about it on this blog. So far, it is a very encouraging and affirmative look at religion.

As always, thanks for reading and thank you for your support this week.  Your support and encouraging words have meant a great deal to me.
Posted by Joe at 8:20 AM

Well writen and very insightful...Thanks, especially on a Sunday Morning!! Better than what will be spoken in many pulpits I will venture to say.

Excellent post. Yours and Davey's. I understand his mixed feelings. You see a cross and realize all the hatred that people who hold it up as their symbol throw at you. Yet, as you point out, it more rightfully symbolizes the sacrifice of Jesus to save us from our sins.

That priest ought to be disbarred (or whatever it is they do). If he is going to deny Barbara communion based on her sin, then he must not serve many people communion because we all sin. What a loser.

Joe: This communion example explains why some people retreat from organized religion. The selective application of rules to hide behind bigotry, the hypocrisy that "we are all sinners" yet only certain sins get punished -- it just seems so inconsistent and contradictory.

Religious people do a lot of good, but organized religion itself is so easily hijacked by people who think they know better, but they don't.

You on the other hand are such a positive role model for your church, it gives me hope.

I take a very long view of the teachings and policy positions etc. etc. that come down from the Vatican. It responds to society outside of its walls at a glacial pace. I also know that the MEN inside are as imperfect and mortal as the rest of us.
I won't go into a side track about how women were preachers/priests in the earliest days of the church.


I wish more people would actually read the story of Sodom and Gomorroah which is synonymous with Christianity's dislike of homosexuality. There is Nothing in it about consensual sex or love. It's about rape, robbery and humiliation. "Thou shalt not beat the crap out of outsiders" is a legitimate lesson.