The Wicked Witch is Dead (or at least gone) 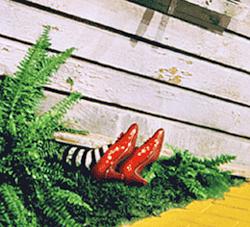 This song from the Wizard of Oz played through my head all day yesterday.  It was made official yesterday that my principal accepted the other job and has left my school.  I will not have to deal with him anymore, at least that is what I was told yesterday.  In the week that he was back after a month of medical leave (due to some mental distress he was having) he only caused chaos and a lot of stress for me and many others at the school.  He was not well enough to come back, and though I hate that I feel so much joy that he is gone and that he was having some mental issues, I can't really say that I am sorry that he is gone.  I just hope that he doesn't decide he wants to come back.  The school's board seems to think that he should not, which should be the final say in the matter.

I truly do hope that he gets back into better mental health, and that he enjoys his new job.  I certainly do not wish him ill will; I am not a spiteful person at heart.  However, I, and many others, firmly believe that the school will be better off without him.  I just hope that whoever replaces him is not worse.  I am in a much better mood than I was in last week.  Unless, he is there today when I get to school, I think my mood will improve and the problems that we had last week will be behind us, and we can correct some issues.
Posted by Joe at 8:00 AM

Amen, then for you, brother! And kudos for recognizing that the former principal indeed had personal issues, yet you chose not to take the "low road" and wish him ill will now that is leaving. You are ready to continue moving on as another roadblock in your life and its happiness has been removed. EXCELSIOR!

Joe: Your reaction is understandable, I've felt the same when a disruptive co-worker finally leaves. It's a sense of glee coupled with relief. Ding-dong indeed.

And, in the importal words of Annie!! "The sun will come out tomorrow, tomorrow will be a better day!"

And it is indeed a sunny forecast in your life, JoeBlow....we dance with you!! Not in celebration of the problems of the principal, but in the rejoicing of a new day approaching for the school and you!!

I know how you feel. And I've had the opposite happen, too. I hope your new principal is supportive, and looking out for the teachers as well as the students.

(What happened with the cheater?)

ps, note that commenters can no longer subscribe via email to comments when you use the popup window for comment entry. No doubt this is a screw up by google, but none-the-less, we can't follow replies, etc. via email any more!