The Kiss of Life 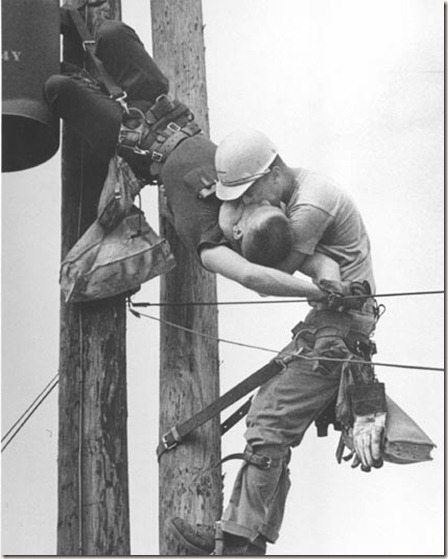 Rocco Morabito won the 1968 Pulitzer Prize for Spot Photography for this photograph – “The Kiss of Life.”

Apprentice lineman J.D. Thompson is breathing life into the mouth of another apprentice lineman, Randall G. Champion, who hangs unconscious after receiving a jolt of high voltage.

Morabito was driving on West 26th Street in July 1967 on another assignment when he saw Champion dangling from the pole. He called an ambulance and grabbed his camera.

I published this post once before, over a year ago, but it is still a favorite photo of mine (and so is the story). I thought that it was worth posting again.

Email ThisBlogThis!Share to TwitterShare to FacebookShare to Pinterest
Labels: Photography

I remember this either from this site or another...no matter where I saw it the first time, it is good to see it again!!

Yeah, a pretty cool picture, and the guy is lucky! Only about 5% of people who need and get CPR live...