A Letter to A Bully 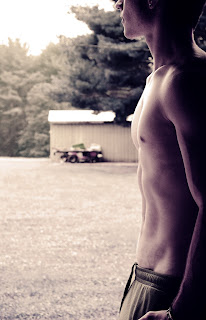 I read this the other day, and really wanted to share it with you guys.  It broke my heart.  I think we have all had that feeling of hopelessness at some point, and thankfully we survived it, not all kids do. Kergan Edwards-Stout wrote this compelling letter, and I hope that you find it as interesting as I do.

The thought of you has filled me with hate almost every day since we first met -- but for different reasons altogether than you might expect.

I still remember the terror I felt every time I approached the soccer field. It was in junior high, a difficult time for almost everyone, but especially for me.

You see, I'd always known I was gay. Even in kindergarten, just looking at Jeff Hayward's smile would make me happy, and I knew intrinsically that it was all right to feel this way -- to love other boys -- as everything about it felt completely natural and unforced.

In junior high, however, I was placed on the same soccer team as you, and everything changed.

What I had seen as natural and good, you were suddenly calling abnormal and detestable. Every "faggot" you spit toward me hit directly between the eyes, and the whispers, taunts, and dirty looks you and Mike Baker sent my way continually unnerved me, affecting both my sense of self and my performance on the field. Because of you, questions about my masculinity hovered over me, and I would feel physically ill at the thought of another practice or game. I would choose different, roundabout paths to my classes, just to avoid where I knew you'd be.

In high school, while I went on to be active in theater and academics, you and Mike continued to rise socially, becoming the big men on campus that I'd longed to be. You were even voted onto the homecoming king's court, and as you took to the field, flashing your charming smile, all I could see was the sneer on your lips when you turned and glanced my way.

But that isn't why you fill me with hate.

Just prior to our senior year, during summer break, word came that you'd tried to commit suicide and were in a coma. No one knew what had happened, but you eventually returned to school our senior year. You were just as popular as you had been before, and perhaps even more so, now that you had this added air of intrigue about you. But despite your outright hatred of me, I still wondered about you and about what could have possibly led you to try to take your own life. You more than anyone seemed to have it all, and despite the way you continued to torment me, I felt a pang of pity for you.

The following summer, I got another call. You'd again tried to kill yourself, tying a noose from the garage rafters -- only this time you succeeded. Your mother discovered you, hanging there, upon her return home.

How lonely you must have felt, Dirk, as you tied that rope. Could you really see no path forward? Was there no one you could have reached out to? Was there no friend, family member, priest, counselor -- not one person you could've trusted with your pain?

Later, I heard that you'd left behind a note, writing that although you did not like girls, you did not want to like boys. And suddenly it became horribly clear to me. You and I were exactly alike. That anger and venom you directed at me, you were also directing at yourself.

How I wish, Dirk, that you'd allowed yourself to connect with me. I'm not saying that a friendship between us could have altered your path, but just knowing that we weren't the only ones could've made our lives easier. For me, discovering that there were other gay people out there did help. I found a progressive bookstore, not too far from where we lived, and I'd covertly journey there as often as I could, just to lose myself in reading about a world that I knew I'd someday enter.

And even if a friendship between us wasn't possible, given our differing social status, imagine how less torturous you could have made another's life, simply by being kind.

While in school, my hatred was based solely upon how mean you were to me. Now my anger is reserved for the lack of value you placed upon yourself. Clearly, you didn't think you were worth loving. Where did you get such a message? You were smart, personable, an exceptional athlete, and beyond handsome. Even with all the venom you sent my way, I still admired your more affirming qualities. Regardless, despite these many gifts, somewhere along the way, you were taught that instead of acting on your love of other men, you'd be better off dead.

I hate that you hurt so, Dirk, and hate just as much that you listened to those who filled your head with such thoughts.

I also hate that I was so absorbed in and blinded by my own situation that I couldn't see your venom for what it really was. What if, one day, instead of running the other way when I saw you, I had instead offered you a smile?

Dirk, you might be surprised to know whom I ran into at our high school reunion: your old pal, Mike Baker. Imagine my shock, spotting him across the room, when we suddenly locked eyes. I immediately went to that same place of fear and panic, but that only lasted a moment, until I saw him break out into a big grin and make a beeline toward me.

I was shocked when he warmly clasped my hand in his, as if we were longtime friends. "I've been looking all over for you," he said, intently. "I've really been wanting to say 'hello.'" While he never brought up our shared past, it was clear to me that he was making amends.

Did you know, Dirk, that Mike's younger brother has come out as gay? Would it surprise you to know that Mike is totally OK with it? If you had known back then that your best friend might have been accepting of you, could that have possibly altered your decision?

People loved you, Dirk -- then and now.

I wish I could have held you, Dirk, comforted you, and told you that everything would be all right. Our individual uniquenesses are a gift, given by our maker, which we then get to share with the world. Your void is noticeable, even 20-odd years later.

You could've done so much, Dirk, if only you'd realized that each one of us is deserving of love and respect.

*Though innocence for all was lost some years ago, in respect of their families, all names have been changed.

This piece originally appeared on the Bilerico Project and KerganEdwards-Stout.com.

Amazing testimony! I wonder how many of us as men can relate back to this letter and place ourselves in it....perhaps not to the extent of a friend or acquaintance taking or attempting to take their life, but having similar experiences in accepting the fact that we, or they, are gay, and as normal as anyone else.

Deep. Simply deep. I echo Silvereagle's comments. This story, this letter, has caused me to reflect back to my own hidden struggles as teen years in high school, too. Deep. Thank you for posting.