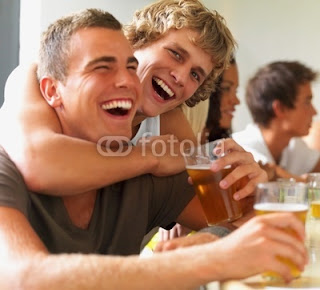 Two lovers fall on hard times and decided to rob a bank together.
The first lover plans the robbery and goes over the plan with the second lover in great detail.
The robbery begins.
The first lover drives up in front of the bank, stops the car and says to the other lover, "I want to make absolutely sure you understand the plan. You are supposed to be in and out of the bank in no more than three minutes with the cash. Do you understand the plan?"
"Perfectly," he said.
He goes in the bank while the other waits in the getaway car.
One minute passes, two minutes pass...seven minutes pass - and the first lover is really stressing out.
Finally, the bank doors burst open and out he comes. He's got a safe wrapped up in rope and is dragging it to the car.
About the time he gets the safe in the trunk of the car, the bank doors burst open again with the security guard coming out.
The guard's pants and underwear are down around his ankles while he is firing his weapon.
As the guys are getting away, the first lover says "I thought you understood the plan!"
The second lover said, "I did! I did exactly what you said!"
"No, you idiot," he replied. "You got it all mixed up. I said tie up the GUARD and blow the SAFE!" 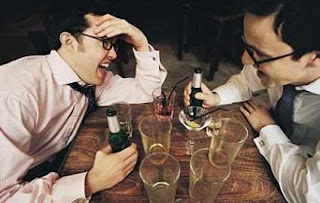 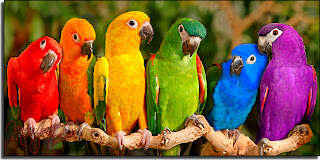 Gay Parrot
A guy decides that maybe he'd like to have a pet and goes to a pet shop.
After looking around he spots a parrot sitting on a little perch; it doesn't have any feet or legs. The guy says out loud, "Geez, I wonder what happened to this parrot?"
"I was born this way," says the parrot. "I'm a defective parrot."
"Ha, ha," the guy laughs. "It sounded like this parrot actually understood what I said and answered me."
"I understand every word," says the parrot. "I am a highly intelligent and thoroughly educated bird."
"Yeah?" the guy asks. "Then answer this: how do you hang onto your perch without any feet?"
"Well," the parrot says, "this is a little embarrassing, but since you asked, I will tell you. I wrap my little parrot penis around this wooden bar, kind of like a little hook. You can't see it because of my feathers."
"Wow," says the guy, "you really can understand and answer; can't you?"
"Of course. I speak both Spanish and English. I can converse with reasonable competence on almost any subject: politics, religion, sports, physics, philosophy. And I am especially good at ornithology. You should buy me; I am a great companion."
The guy looks at the $200.00 price tag. He says. "I can't afford that."
"Pssst," the parrot hisses, motioning the guy over with one wing. "Nobody wants me because I don't have any feet. You can get me for $20.00; just make an offer."
The guy offers twenty dollars and walks out with the parrot. Weeks go by and the parrot is sensational. He's funny; he's interesting; he's a great pal, he understands everything, sympathizes, and gives good advice. The guy is delighted.
One day the guy comes home from work and the parrot says, "Pssst," and motions him over with one wing. The guy goes up close to the cage. "I don't know if I should tell you this or not," says the parrot, "but it's about your lover and the mailman."
"What?" asks the guy.
"Well," the parrot says, "when the mailman came to the door today, your lover greeted him in a pair of briefs that showed everything and kissed him on the mouth."
"What happened then?" asks the guy.
"Then the mailman came into the house and put his hand on your lovers crotch and began petting him all over," reports the parrot.
"My God!" the guy says. "Then what?"
"Then he pulled down the briefs, got down on his knees and began to lick him, starting with his chest, slowly going down and down." The parrot pauses for a long time...
"What happened? What happened?" says the frantic guy.
"That's what pisses me off. I don't know." said the parrot. "I got a hard-on, and fell off my fucking perch."

If we can't laugh at ourselves...then who can we laugh at. I hope you guys enjoyed these little snippets of fun. Some of them are kind of old, but I still find them funny.

Email ThisBlogThis!Share to TwitterShare to FacebookShare to Pinterest
Labels: Funny

Always good to laugh a bit! Thanks for the post.

Thank you for a fine end to a LONG week!
I'm laughing by a$$ off!