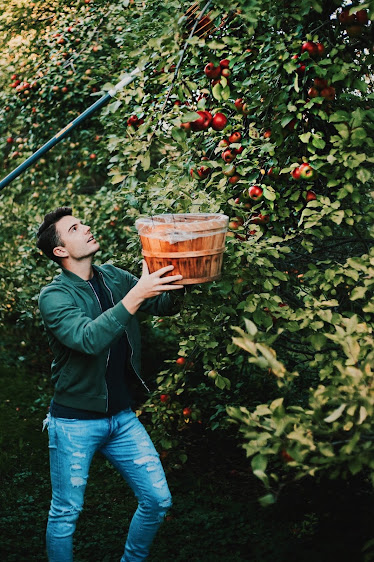 Five years ago today, I arrived in Vermont. As I pulled into town, I was forced to make a detour around a train wreck, literally. There had been a train derailment in town a few days before that made the national news. As I got to town, they were transporting the train and had the main road blocked, so I had to take a detour. I made it into the parking lot of my new apartment just a minute or so before they hauled the train right past me. If I had been just a few minutes later, I'd have been stuck at a stop sign for over an hour as they slowly moved this train down the street.

By the way, if you are wondering why I chose a picture of a guy picking apples as my picture today, apples are one of the joys of Vermont, especially the cider made from them. Vermont makes some of the best hard cider in the world. If you like your cider a little dry, I suggest Citizen Cider made in Burlington, especially their Unified Press. If you like it a little sweeter, then I would suggest Woodchuck made in Middlebury. There are ciders made all over Vermont. Stowe Cider is another popular one, but it's not one of my favorites. It has a very floral taste that I find off-putting in a cider. There are more than a dozen other cideries in Vermont, including Champlain Farms, which I don't think I have ever had. By the way, Cider is one of the few alcoholic beverages that don't trigger my migraines. I can no longer drink beer because of the debilitating headaches it causes, and I am not talking hangovers. I mean, before I can finish a bottle of beer, I have a tremendous headache. However, cider doesn't do that to me, and I like cider better anyway.

The other great thing about Vermont is the cheddar cheese. Most white cheddars are called Vermont cheddar, but not all "Vermont" cheddar is made in Vermont. However, cheese from Cabot Creamery is made in Vermont, and I love their Seriously Sharp brand. I have said before that Vermonters will call anything that they put cheddar cheese and apples on "The Vermonter," or some variation of the name. I am not thrilled with apples and cheddar cheese together, but independently, they are pretty good. Of course, Vermont is also known for its maple syrup. Vermont is the second-largest producer of maple syrup only behind Quebec.

So, I've been here for five years now. If I make it 25 more years, I might be able to retire and find a nice place to spend the rest of my life.

Wow, time flies. I remember reading your blog when the school let you go, and you found this job. I was surprised that an Alabama guy would move to Vermont. Seems to be working out for you.

As a New Englander, I'm really glad you're finding things to enjoy in Vermont.

Good luck for the next 25 years!