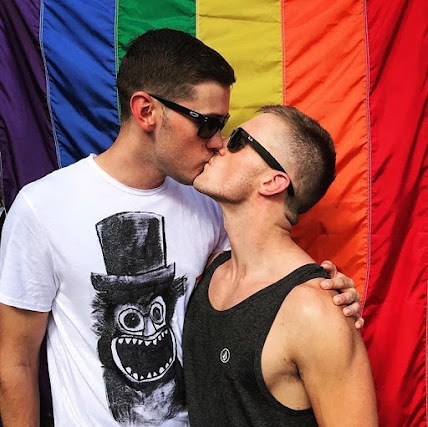 Beloved, let us love one another, for love is from God, and whoever loves has been born of God and knows God. Anyone who does not love does not know God, because God is love. In this the love of God was made manifest among us, that God sent his only Son into the world, so that we might live through him. In this is love, not that we have loved God but that he loved us and sent his Son to be the propitiation for our sins. Beloved, if God so loved us, we also ought to love one another. No one has ever seen God; if we love one another, God abides in us and his love is perfected in us.

Today marks the 32nd annual National Coming Out Day, a cause for celebration and a time to look back on how far we've come. Some look forward to this day to take that big step for the first time and declare who they are to the world. But for many young LGBTQ+ people who are still questioning things, it is a time for quiet reflection and introspective exploration. The day was established to remind society about something positive in the LGBTQ+ community. If more people were aware of out and proud LGBTQ+ individuals living among them, then harmful stereotypes and laws affecting them would hopefully go away. Many hurtful stereotypes have already gone away due to the increased visibility of LGBTQ+ people in society. While LGBTQ+ people and issues are very much at the forefront of American culture today, days like this are still significant.

For every person that is out and proud in their sexual orientation or gender identity, countless others are afraid to share that information. They're scared to share it because of fear of losing their homes, families, or jobs. Some people don't come out because they don't feel like their faith and their sexuality can coexist. Most Christians, myself included, grew up in a church where we were told, at the worst, that gay people are evil and going to hell, and at best (or most hypocritical), were welcome in the church, but not in leadership. Some will even claim they "hate the sin, but love the sinner," which is a backhanded way of saying that being LGBTQ+ is wrong unless you conform to a heteronormative life. Why would any LGBTQ+ Christian come out in that environment? What does the coming-out process look like for LGBTQ+ Christians, especially when they do not feel safe, affirmed, or supported in their communities? LGBTQ+ Christians can be haunted by feelings of depression, despair, and thoughts of suicide as they try to reconcile their faith with their sexuality. These haunting thoughts are not something that God would want for His children.

Across the United States, LGBTQ+ Christians are coming out of the closet. For many of them, finding acceptance within the church can be a test of faith. Studies show that LGBTQ people of faith are often conflicted. According to a report from the Pew Research Center, many feel unwelcome within most major religions and are much less likely to identify as Christian compared to the general public. For many people who claim to be Christians, "homosexuality" is an issue, when it should not be. It is often considered a matter of "us" versus "them," or worse, for LGBTQ+, a question of their behavior, not something intrinsic to their identity. A person cannot claim to love someone if they do not accept who that person is. Being LGBTQ+ is not a lifestyle, nor is it a choice. God created us in His image. "Anyone who does not love does not know God, because God is love." (1 John 4:8) Christians cannot have it both ways, you either love a person or don't and if you don't accept a person, you do not love them. And, if you do not love them, then you do not know God. It is a pretty simple and straightforward concept.

I learned pretty early that, as an LGBTQ+ Christian, I am like a unicorn—something people have heard of but never quite seen in person. However, we are here, we are real, and we don't navigate this journey without our own unique set of problems. I know so many that have lost their relationship with God and/or the church, not because they no longer believed, but because doing the work to free themselves from oppressive things like patriarchy and shame also allowed them to recognize the space that those same concepts occupy within religion. But as a person raised in the Church of Christ, the idea of divorcing myself from my relationship with God and my Christian upbringing seemed unrealistic.

In church, the preachers always say, "don't just listen to me, study for yourself!" We are consistently taught to read the Bible, so we can truly understand the meaning behind the scripture for ourselves. This concept of studying is indeed the first step toward freeing yourself from religious oppression. To "rightly divide" means to adequately define what the words that you are reading mean. Biblical texts have been used to oppress. We have to deconstruct those texts for their actual meaning and apply those meanings to our lives.

Many lean on the Old Testament's heavy-handed stories as a reason to take away love, rights, and justice from anyone they do not like. But Christ himself showed that his message was completely different from those negative messages. He loved marginalized people, underprivileged people, and people seen as unworthy by "high class" individuals. He was here for those going through tough times and living their truth even more because those were the ones that, more often, showed true love towards him. The Bible reaffirms that God loves us and created us just as we are.

I took the time to deeply examine what Christ asks of me instead of what church members asked to remember that my choice to have a relationship with Christ is personal. It is not defined by or bound to church or organization. A church is more than just a building or the group of people that gather in that building. Church is perspective and action. My relationship with God makes me feel good. It teaches me about love, charity, hope, faith, joy, strength, and peace. I chose to let those lessons provide me with a path to a more spiritually fulfilled life.

I grew up with people who were often looking down on others, taking notes of all the bad things that they did, and that was especially true of judgmental Christians. The entire church community of Christians where I grew up watched for opportunities to correct, judge, or shame you for living outside of the boundaries they have set. In deciding to study for myself, I had to be willing to take on the burden of releasing fear, shame, and conviction. I would have to believe in myself and not allow myself to be hurt or offended when homophobic Christians rejected me. It's a tough thing to do because we all hate rejection, but we need to rid our lives of toxic individuals who would reject you for who you are.

Our spirituality is a personal decision and a relationship between God and us. The problems arise when outsiders try to create barriers and rules based on their own biases, prejudices, and ignorance. It takes just a few extra steps to learn that if you allow your heart and mind to step outside of the physical walls of organized religion, you will see that at its root is love and peace.  If you have already pulled off the layers of historical oppression, then you have already started the process of defining exactly how to navigate it authentically for yourself.

Email ThisBlogThis!Share to TwitterShare to FacebookShare to Pinterest
Labels: Coming Out, Religion