Caligula: The Worst Movie Ever Made? 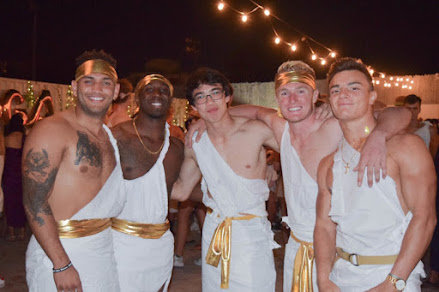 ‘Caligula’ is sickening, utterly worthless, shameful trash. If it is not the worst film I have ever seen, that makes it all the more shameful: People with talent allowed themselves to participate in this travesty. Disgusted and unspeakably depressed, I walked out of the film after two hours of its 170-minute length. That was on a Saturday night, as a line of hundreds of people stretched down Lincoln Ave., waiting to pay $7.50 apiece to become eyewitnesses to shame. I wanted to tell them...what did I want to tell them? What I’m telling you now. That this film is not only garbage on an artistic level, but that it is also garbage on the crude and base level where it no doubt hopes to find its audience. ‘Caligula’ is not good art, it is not good cinema, and it is not good porn.

If you are not familiar with the 1979 movie, Caligula is an erotic historical drama film focusing on the eponymous Roman Emperor Caligula's rise and fall. The film starred Malcolm McDowell in the title role, alongside great actors like Helen Mirren, Peter O'Toole, and John Gielgud. It is the only feature film produced by the men's magazine Penthouse. Producer Bob Guccione, Penthouse magazine's founder, intended to make an explicit pornographic film with a feature film narrative and high production values. Guccione signed Gore Vidal to write the screenplay. Vidal was paid $200,000 and wrote the script as a debauched and homoerotic allegory about how absolute power corrupts absolutely. Vidal naively believed that his screenplay about the mad, monstrous emperor who became synonymous with cruelty, insanity, and megalomania would be a relatively classy affair. There was no initial indication that the film would become a pornographic monstrosity.

While Vidal was naïve to think this would be a reputable movie, he had reason to believe that Guccione did want to make something respectable. After all, Caligula was not Guccione’s first foray into filmmaking; he had already helped finance a handful of major-studio productions such as Chinatown (1974), The Longest Yard (1974), and The Day of the Locust (1975). As Nashawaty points out:

I always loved teaching Ancient Rome, especially the mad emperors Tiberius (Reigned 14–37 CE), Caligula (Reigned 37–41 CE), Claudius (Reigned 41–54 CE), and Nero (Reigned 54–68 CE). It was always one of my most popular lectures. I read a lot about the emperors, especially Suetonius’s The Twelve Caesars. So, back when Netflix still mailed out DVDs, I requested Caligula to see what all the talk was about. While it’s a terrible movie, it is by far not the worst that I have ever seen. I have seen many independent gay movies that were atrocious and barely watchable. However, I used to (with a disclaimer) allow my college students to watch and review Caligula for extra credit, along with dozens of other much better historical movies. Only a few took me up on the offer to watch Caligula, and those who did were all shocked. It is a shocking movie; how shocking depends on whether you watch the 1981 105-minute R-rated version without the explicit sexual material or the original 1979 156-minute version.

Have you ever seen Caligula? Did you see the full version or the edited version? What was your opinion of the movie? If you haven’t seen it, are you tempted to watch it? Warning: It is graphic!

I saw Caligula many years ago and yes, it's quite shocking but isn't it what it's for to make us see who terrible was this character of a bloody sadic emperor in Rome times.

As a French Canadian, we were since the 60's used to see some French movies from France and also some from Italia. As I remember going to see the «Satiricon» from Federico Fellini, and in the 70's it was very special because some «gay» scenes in it. It was a fantasy movie but with powerful images.

The thing I've always put in comparaison is the US movies productions and the French ones.
In a French movie when you see a «sex part» they aren't ashame to show ALL of it and the male actors are often seen in full frontal naked view.
In USA's movies, we see all of the female but for the male ones we often see their chest and few butts.
This is changing like in a serie as «Game Of Thrones» style were it has been going a bit further and even showing gay encounters too.

Now for Galigula's movie, what Americans were expecting to see?
It's like going to see a movie about skarks but not wanting to see all the blood and meat that a shark can eat while hunting a prey.

The same way the American soldiers in WW II just discovered all the horrors of the Hollocust while freeing the concentration camps.
And even then, they've only saw the result of all the shamful horror the Nazis did to so many Jew.

God forbid! Roderick P.S. This entry and yesterday's recipe indicate that you must be feeling better.

JiEL, the thing about Caligula is that the movie pales in comparison to the actual man. He was far more of a sadistic lunatic than the movie portrays, that is if you believe what Suetonius says about him. The film also doesn't portray the horrors he witnessed as a child under the guardianship of his uncle, Tiberius.

Roderick, the jury is still out on how I am feeling. I am still experiencing headaches, but they are no longer constant. They usually build in intensity and then slowly subside. I see my neurologist again on Monday for my next Botox injections, and I will speak to her then about my progress.