Brief History of GLBT Rights Around the World 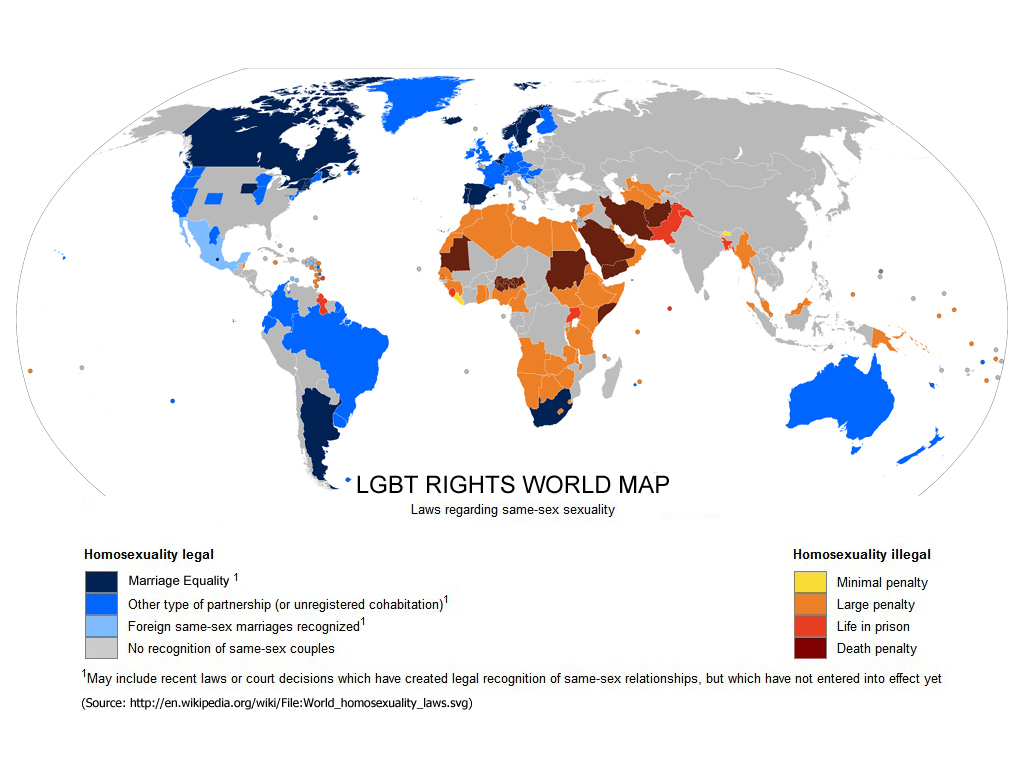 Throughout history and across cultures, the regulation of sexuality reflects broader cultural norms.
Most of the history of sexuality is unrecorded. Even recorded norms do not always shed full light on actual practices, as it is sometimes the case that historical accounts are written by foreigners with cryptic political agendas.
Throughout Hindu and Vedic texts there are many descriptions of saints, demigods, and even the Supreme Lord transcending gender norms and manifesting multiple combinations of sex and gender. There are several instances in ancient Indian epic poetry of same sex depictions and unions by gods and goddesses. There are several stories of depicting love between same sexes especially among kings and queens.  Kamasutra, the ancient Indiann treatise on love talks about feelings for same sexes. Transsexuals are also venerated e.g. Lord Vishnu as Mohini and Lord Shiva as Ardhanarishwara (which means half woman). 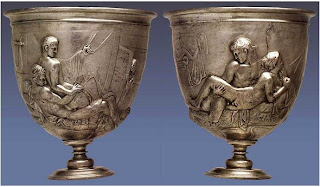 In the earlier centuries of ancient Rome (particularly during the Roman Republic) and prior to its Christianization, the Lex Scantinia forbade homosexual acts. In later centuries during the Empire, men of status were free to have sexual intercourse, heterosexual or homosexual, with anyone of a lower social status, provided that they remained dominant during such interaction. During the reign of Caligula, prostitution was legalized and taxed, and homosexual prostitution was seen openly in conjunction with heterosexual prostitution. The Warren Cup (above left) is a rare example of a Roman artifact that depicts homosexuality that was not destroyed by Christian authorities, although it was suppressed. A fresco from the public baths of the once buried city of Pompeii depicts a homosexual and bisexual sex act involving two adult men and one adult woman. The Etruscan civilization left behind the Tomb of the Diver, which depicts homosexual men in the afterlife.
In feudal Japan, homosexuality was recognized, between equals (bi-do), in terms of pederasty (wakashudo), and in terms of prostitution. The Samurai period was one in which homosexuality was seen as particularly positive. In Japan, the younger partner in a pederastic relationship was expected to make the first move; the opposite was true in ancient Greece. Homosexuality was later briefly criminalized due to Westernization.
The berdache two-spirit class in some Native American tribes are examples of ways in which some cultures integrated homosexuals into their society by viewing them, not with the homosexual and heterosexual dichotomy of most of the modern world, but as twin beings, possessing aspects of both sexes.
The ancient Law of Moses (the Torah) forbids men lying with men (intercourse) in Leviticus 18 and gives a story of attempted homosexual rape in Genesis in the story of Sodom and Gomorrah, the cities being soon destroyed after that. The death penalty was prescribed.
Similar prohibitions are found across Indo-European cultures in Lex Scantinia in Ancient Rome and nith in protohistoric Germanic culture, or the Middle Assyrian Law Codes dating 1075 BC.
Laws prohibiting homosexuality were also passed in communist China. (The People's Republic of China neither adopted an Abrahamic religion nor was colonized, except for Hong Kong and Macau which were colonized with Victorian era social mores and maintain separate legal system from the rest of the PRC.) Homosexuality was not decriminalized there until 1997. Prior to 1997, homosexual in mainland China was found guilty included in a general definition under the vague vocabulary of hooliganism, there are no specifically anti-homosexual laws.
In modern times eight countries have no official heterosexist discrimination. They are Argentina, Belgium, Iceland, Netherlands, Norway, Sweden, South Africa, and Spain. This full non-discrimination includes the rights of marriage and adoption. Two additional countries have marriage rights for same-sex couples, namely Portugal and Canada, but in Portugal this right does not include same-sex adoption, and in Canada it varies by jurisdiction (it is legal everywhere except in Nunavut and Yukon). The Canadian Blood Services’ policy indefinitely defers any man who has sex with another man, even once, since 1977. LGBT people in the US face different laws for certain medical procedures than other groups. For example, gay men have been prohibited from giving blood since 1983, and George W. Bush's FDA guidelines barred them from being sperm donors as of 2005, even though all donated sperm is screened for sexually-transmitted diseases.

Quite interesting. I hope this will be a very different kind of post in about a generation!

It is interesting to note that the blood services, at least in this country, are quite willing to take blood from anyone - the supply of donors is just too small, and the testing is very, very good - yet the "medicrats" continue to deny us gay men the ability to donate blood. They seem to forget that heterosexuals carry HIV, too, and that the only way to avoid any possibility of tainted blood is to synthesize it.

Why couldn't you have been my history teachers through the years? I might have paid a bit of attention!

very interesting facts here and i never knew about the blod donating or sperm donating either. wow i'm really learning alot and i would hope with time all of this will change for the better

Being a history buff, I'm a little ashamed that I didn't know about Lex Scantinia. That probably explains a lot more about Western views on sexuality than does religion.

Becca, I am glad that you are learning a lot. It amazes me that a woman who has slept with a gay/bisexual man only has to wait a year before giving blood again, whether that sex was protected or not, but a man who has had sex with another man just once since 1977 is banned from giving blood. It's a sad state of affairs, and I wish it would change. It's hard to come up with an explanation sometimes as to why you can't donate blood when you don't want to state the real reason. I usually end up blaming it on my blood pressure medicine.

Mack, I think that we often think of Rome as being this wild sexually free empire, when in reality they had strict sexual and moral laws, under both the Republic and the Empire (Augustus reiterated many of these laws and made them stricter). Also, we often forget that the Catholic Church was established using not only the outline in the Bible for church leadership but along the lines of the Roman Empire. When the Western Roman Empire fell in 476 AD, the only institution with the power to maintain any control was that of the Roman Catholic Church, and it continued many of the practices and prejudices of the old Roman Empire.