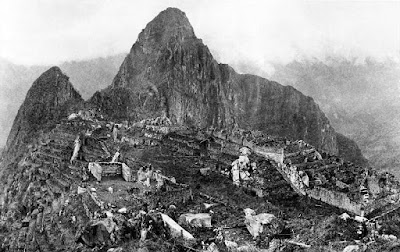 On July 24, 1911, that’s right 100 years ago today, Machu Picchu was found by an American historian, and this weekend many are celebrating the centennial of the "discovery" of the cloud city high in the Andes — one of the most remarkable archeological sites on the planet.

Now, of course, Peruvians say that the city was not discovered a century ago today, because they never lost it. But Americans give credit to Hiram Bingham III, who climbed the Andes and saw the remarkable city, surrounded by holy mountains and filled with houses, terraces and temples that with all our modern skills and machines would be impossible to build today. 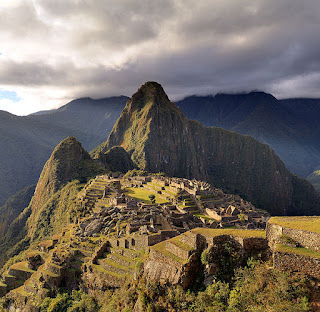 Machu Picchu is a pre-Columbian 15th-century Inca site located 7,970 feet above sea level. It is situated on a mountain ridge above the Urubamba Valley in Peru, which is 50 miles northwest of Cusco and through which the Urubamba River flows. Most archaeologists believe that Machu Picchu was built as an estate for the Inca emperor Pachacuti (1438–1472). Often referred to as the "Lost City of the Incas", it is perhaps the most familiar icon of the Inca World.

The Incas started building the "estate" around AD 1400, but abandoned it as an official site for the Inca rulers a century later at the time of the Spanish Conquest. Although known locally, it was unknown to the outside world before being brought to international attention in 1911 by the American historian Hiram Bingham. Since then, Machu Picchu has become an important tourist attraction. Most of the outlying buildings have been reconstructed in order to give tourists a better idea of what the structures originally looked like. By 1976, thirty percent of Machu Picchu had been restored. The restoration work continues to this day. 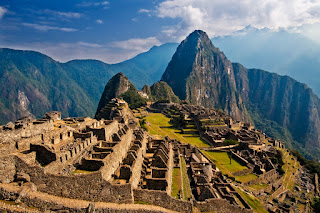 Since the site was never known to the Spanish during their conquest, it is highly significant as a relatively intact cultural site. Machu Picchu was declared a Peruvian Historical Sanctuary in 1981 and a UNESCO World Heritage Site in 1983. In 2007, Machu Picchu was voted one of the New Seven Wonders of the World in a worldwide Internet poll.

Machu Picchu was built in the classical Inca style, with polished dry-stone walls. Its three primary buildings are the Intihuatana, the Temple of the Sun, and the Room of the Three Windows. These are located in what is known by archaeologists as the Sacred District of Machu Picchu. In September 2007, Peru and Yale University almost reached an agreement regarding the return of artifacts which Yale has held since Hiram Bingham removed them from Machu Picchu in the early 20th century. In November 2010, a Yale University representative agreed to return the artifacts to a Peruvian university. 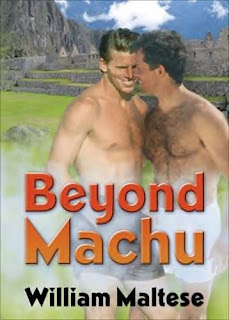 And if you want a fun read that centers around this wonderfully historic site (one which I hope to visit one day), you should check out William Maltese’s Beyond Machu.  From the first chapter, Beyond Machu is jam-packed with mystery, adventure and intrigue. Dan Green, travel photographer and investigative reporter extraordinaire, has a chance meeting with the mysterious and sexy Sloane Hendriks that results in Dan leaving his comfortable world and being thrust into an unexpectedly dangerous trip to the ancient Incan city of Machu Picchu. Sloane is a man with a dark past, which could be fatal, but Dan believes Sloane is the ticket to a newspaper story that will expose hidden ruins, illicit archeological finds, and long-lost treasure - if they can stay alive long enough to find it.

Sloane and Dan are captivating characters whose connection to one another only increases as the tension mounts. From the heights of Machu Picchu to the dangers of the South American rain forest, the reader is taken on a chaotic journey that can lead only to death--or riches beyond anyone's wildest dreams. It's Indiana Jones meets Allan Quatermain with enough man/man romance to make your toes tingle.

Machu Picchu is one of the places I have actually had an interest in for a while. It's an amazing place, and sooo significant historically. NatGeo has done at least a couple of articles over the years, and every one of them is awesome.

Hopefully, I will be able to go to Machu Picchu one day also, Jay. I also want to visit the rock-hewn churches of Lalibella in Ethiopia.