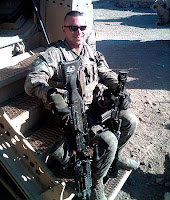 On January 27, 2011, America lost it's first known gay soldier since the repeal of DADT.  Cpl. Andrew Wilfahrt, a gay Minnesota man who went back in the closet to join the military, died while on patrol in Afghanistan when an IED exploded during an attack on his unit. He was 31. And his mother loved him very, very much.

Believed to be the first gay Minnesota soldier to die in the Iraq and Afghanistan wars, Wilfahrt (pronounced WIHL’-furt), who enlisted in the Army in January 2009 and was deployed to Afghanistan that July, “was a gentle soul,” says his mother Lori. “He was very kind and compassionate. He was interested in a lot of things, but more at a level of detail than what I think most people pursue something. He was fascinated with numbers, and patterns with numbers and palindromes. He would often spot a series of numbers and say, ‘Well, if you add up your birthday and your birthday it equals this.’ Or, ‘All of our birthday dates combined equals our home address.’ Just odd things like that.”
He joined the military, Lori says, because he “tried to grow up. He really turned out to be an interesting, wonderful young man. But I think he still sought something else. He was looking for a purpose, a life of meaning.”
As for his sexuality, being gay and joining the military concerned Lori “a lot. I think it concerned him as well. He spent a lot of time thinking about it and he came to terms with it. He knew he would have to go back in the closet, that he would have to keep that to himself. And he did, for at least part of his stay in the Army. But when I talked to him (or when he wrote maybe) when he was in Afghanistan, he said nobody cares. He said, ‘Everybody knows, nobody cares.’ He said, ‘Even the really conservative, religious types, they didn’t care either.’ He said it’s about something else.”
I used the poem above because his father, who along with Wilfahrt mother are fighting for gay marriage in Minnesota, reads a Wordsworth poem each time he visits his son's grave.  A lover of literature, Jeff, Andrew's father, always brings a collection of William Wordsworth.  As he sits on the marble stone commemorating his son, he reads aloud from a collection of Wordsworth. His wife Lori sits on the ground nearby.
Lori and Jeff Wilfahrt, parents of Andrew Wilfahrt, a gay Army Corporal killed in Afghanistan earlier this year, continue honoring their son's memory in the best way possible: fighting for LGBT equality, especially in Minnesota, a state that may vote to ban gay marriage in 2012.
"I hope my son didn't die for human beings, for Americans, for Minnesotans who would deny him civil rights," Mr. Wilfahrt recently said in a speech about Andrew.

Watch as the Wilfahrts discuss their son's life, including being accepted as openly gay in the army, and explain why they're playing the "trump card" to get straight people on board with pro-gay policies.

Joe: Thanks for sharing this amazing story.

thank you for that video. I found it very powerfull. What person could not be moved by the parents and what they said

Graham, I found it very powerful too, it's the main reason I decided to share it. I think politicians (and Americans as a whole) often forget about the sacrifices people make for freedom.