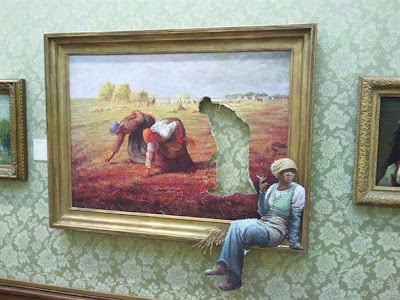 This just makes me giggle.

To see what this painting is really all about, Click "Read More" below. 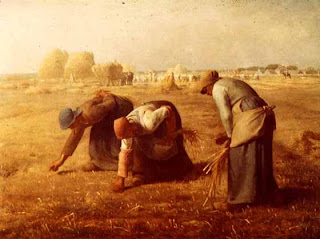 Introduction
In this depiction of the rural life of nineteenth century France, we see three female figures gathering the leftovers after the harvest. This practice – known as gleaning – was traditionally part of the natural cycle of the agricultural calendar undertaken by the poor, and was regarded as a right to unwanted leftovers. Although the practice of agricultural gleaning has gradually died away due to a number of historical factors (including industrialisation and the organisation of social welfare for the poor), there are nonetheless still people in the present day that we might understand to be gleaners.
The Painting
When The Gleaners was first exhibited in 1857 it met with mixed reviews within the art world. Some commentators attacked its depiction of the rural poor, which on the one hand served as an unwelcome reminder of the marginalized poor (who were taken to be a threat to society), and on the other hand were consider the kind of grotesques who had no place within the artistic realm. The comments of one critic named Paul de Saint Victor might be taken to illustrate such an attitude:
His three gleaners have gigantic pretensions, they pose as the Three Fates of Poverty … their ugliness and their grossness unrelieved. (in Griselda Pollock, Millet, London 1977, p.17)
Part of the shock value of Millet’s painting was undoubtedly due to the fact that in the past gleaning had usually been represented in art through the Old Testament tale of Ruth the gleaner, in which Ruth is characterised as a modest and virtuous example of the way to God, and not – as it was now – a statement on rural poverty.
http://www.st-andrews.ac.uk/~waste/timeline/story-pic1.html

That's really cute.
My 90+ year-old next door neighbor growing up had a print of this painting in her living room. It always makes me think of her.

I saw this and just loved it. Whoever came up with it had a good sense of humor.