First of all, I am an unapologetic GEEK, and I admit it.  If you’ve read my blog for a while, then you already know that I am a huge fan of “The Big Bang Theory.”  My inner geekiness goes far beyond “The Big Bang Theory” because I am a total Sci-Fi nerd.  I admit it.  It may not be very sexy to most people, but I am going to tell you why it is to me.  I really do love science fiction.  Had I gone to the right grad school and had the right advisor, I might have written my dissertation on the Representation of the Cold War in Science Fiction.  (Star Trek Example: Federation=The United States [with England as the Vulcans], Klingons=Soviet Union, Romulans=Chinese, etc.) It still might make a great book and research project one day if no one beats me to it.  It is not an idea original to me. 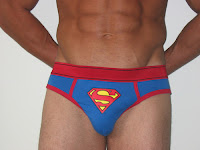 I love most things sci-fi: Star Trek, Star Wars, Stargate, and even Starship Troopers.  I love Babylon 5, Battlestar Galactica, and Buck Rogers.  I’m not a big comic book person, though I admit I do love the movies and TV shows that come from them, such as The Fantastic Four, X-Men, Batman, Wonder Woman, Daredevil, The Flash, Flash Gordon (and Flesh Gordon may come into this category, at least as a spoof).  I also have a long standing crush on Superman: Superman (Christopher Reeves), Lois and Clark (Dean Cain), Smallville (Tom Welling), Superman Returns (Brandon Routh), etc.  I also loved The 4400, great show.

So lets go through a few of the examples and let me explain why I find science fiction appealing (and even sexy). Let’s begin with the Star Trek franchise. The Star Trek captains have all been sex symbols.  Kirk was always the sexy womanizer,.Picard the reserved cultured captain. Sisko was also a bit of a womanizer, though in a reserved damaged sort of way (his wife had been killed in the Borg attack, and he later married a female freighter captain).   Captain Janeway was always a very butch female captain, bordering on lesbianesque.  Of course, you then have Captain Archer who returned to the more womanizing sex symbol type like Kirk.  Now with the new series of movies, we have the absolutely gorgeous Chris Pine as Captain Kirk, and he is surrounded by the best looking of all of the Star Trek casts.  In addition the original Sulu, played by George Takei, is an openly gay man, giving gay Star Trek fans someone to look to.  Of course, Star Trek has had a number of hot male stars:  Wesley Crusher (TNG), Dr. Julian Bashir (DS9), Tom Paris (VOY).  Dr. Bashir was made out to be the first real sex symbol in the new incarnations of Star Trek after the original series.  Enterprise ramped up the sexiness with Trip, who was often seen in his “star trek/space age” underwear.  Enterprise was actually expected to have a gay character, rumored to be the weapons officer Malcolm Reed, but it never materialized with the low ratings the show received.

Stargate has also had it fair number of sexy men.  Daniel Jackson was smart, cultured, and always on a moral crusade would have made the most likely gay man in the series, but since it began with him being married, that was unlikely to materialize.  In my opinion, he was always very sexy.  Stargate: Atlantis has Col. Sheppard who could just make me weak in the knees, but it was the short-lived Stargate: Universe that really ramped up the sex factor.  Matthew Scott, played by Brian J. Smith, who has been known for playing several gay-themed characters in the movies Hate Crimes and The War Boys, both of which are highly recommended.  Also, and just because he played the dorky and somewhat awkward character of Eli, I always found him attractive.  The character also had a mother who suffered from HIV contracted when she was a nurse and was attacked by a drug addict.

Most recently, we have several sci-fi/horror shows that give us just what we want with sexy guys.  True Blood has a host of sexy men, some of whom are gay, and MTV’s Teen Wolf has a host of sexy young guys, including the beautifully (and possibly gay) Colton Haynes (Warning: this link is NSFW). 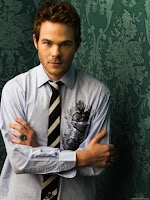 And finally, a science fiction show has an openly gay character.  Warehouse 13 on the SyFy Channel has a new character Agent Steve Jinx, played by Aaron Ashmore, who admitted on last night’s episode that he is gay.  Ashmore also has played at least on other gay character when he played Marc Hall in Prom Queen: The Marc Hall Story. I wonder if they will give him a boyfriend.  All of the other major characters on the show have been given love interests through the course of the show, so I certainly hope that Jinx will be given one as well.

i love star wars and buck rogers i'mnot a huge fan of sci-fi but i do like it and i love when i meeet someone who is into it because then i learn all kinds of great stuff.

I agree with, becca, nerds (and geeks) are the cute. Potentially the cutest people on the planet.

I do love sci-fi/fantasy/horror a lot, though I don't read as mutch as I'd like or watch as much as I'd like.

Thanks for this great run-down, JoeBlow. :)

I love sci-fi literature more than I like the TV shows. I guess my warped imagination could read more into the books, and that made suspension of disbelief easier than the programs.

Still, a neat post, and I'd be happy to sit around watching some of them if I had the guy in Superman briefs to watch them with!

Joe: I love Sci-fi too and yes the Casper shower scene in Starship Troopers was hot, but the rest of the movie was pretty lame, especially if anyone follows military history and battle tactics. And that was followed by the straight to DVD second movie that I refused to watch because the first one was so bad.

I enjoyed Wing Commander, altho some parts were kind of hokey. Unfortunately it did not do well at the box office so only the first one was made.

I always wondered what super powers Superman brought to the bedroom. Or was all that just overcompensating for a little cock?

If you want to see a flame war, you should check out the forums that argue which universes would win if the different groups battled head to head. Would Star Fleet beat the Empire? Could the Cylons take over Babylon 5? How would the Borg fare against Battlestar Galactica?

Some amateur fans did put together an amazing battle between Star Trek and Babylon 5 as a full length movie, but here's just the highlights:

Great post. Love Big Bang Theory but am not a huge sci fi fan. But smart geeks are hot as hell and great in bed. I need someone to show me the ropes.

I'm glad that this post brought out the geek in all of us. Thanks guys and becca for your comments.

FOC, you are absolutely right that the shower scene in Starship Troopers was really the only good part of the movie, the rest was just too hokie. I also like Wing Commander, how can you not love Freddie Prinze, Jr. And I love the videos, though I think that teh Federation would kick Babylon 5's ass, LOL.

And yes, geeks/nerds are hot.