Mount Washington and the Cog 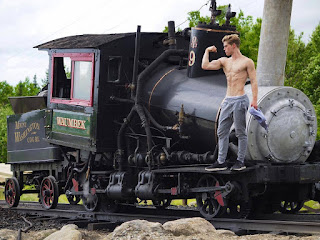 Other than anywhere in the state of Maine (the only New England state I have not visited), I have wanted to visit Mount Washington in New Hampshire, which is called Agiocochook by some Native American tribes. Mount Washington is the highest peak in the Northeastern United States at 6,288.2 ft. and the most topographically prominent mountain east of the Mississippi River. The mountain is notorious for its erratic weather. On the afternoon of April 12, 1934, the Mount Washington Observatory recorded a windspeed of 231 mph at the summit, the world record from 1934 until 1996. Mount Washington still holds the record for the highest measured wind speed not associated with a tornado or tropical cyclone. The mountain is located in the Presidential Range of the White Mountains, in Coös, New Hampshire.
A few years ago, I read Jamie Fessenden's Murder on the Mountain, a gay mystery novel that takes place on and around Mount Washington. Here is the publisher's summary:

When Jesse Morales, a recent college grad who aspires to be a mystery writer, volunteers to work on the summit of Mount Washington for a week, he expects to work hard. What he doesn't expect is to find a corpse in the fog, lying among the rocks, his head crushed. The dead man turns out to be a young tourist named Stuart Warren, who strayed from his friends while visiting the mountain.

Kyle Dubois, a widowed state police detective, is called to the scene in the middle of the night along with his partner, Wesley Roberts. Kyle and Jesse are instantly drawn to one another, except Jesse's fascination with murder mysteries makes it difficult for Kyle to take the young man seriously. But Jesse finds a way to make himself invaluable to the detective by checking in to the hotel where the victim's friends and family are staying and infiltrating their circle. Soon he is learning things that could very well solve the case--or get him killed.

Fessenden lives in New Hampshire, where several of his books take place. Murder on the Mountain is a mystery and gay romance, which is always fun. It is also my favorite of Fessenden’s books. I rarely read books more than once, but this one I have. It’s always enjoyable, and it got me interested in Mount Washington.

The Mount Washington Cog Railway, also known as the Cog, ascends the mountain's western slope. The Cog is what attracted me to want to visit Mount Washington. I’ve always loved trains, and the Cog is a historic and interesting locomotive. Built by Sylvester Marsh between 1866 and 1869, the Cog is the world's first mountain-climbing cog railway (rack-and-pinion railway). The railway is still in operation. It uses a Marsh rack system and both steam and biodiesel-powered locomotives to carry tourists to the top of the mountain.

The steam locomotive above is the Waumbek built by the Manchester Locomotive Works in 1908 and is still in operation. In the picture above, you’ll notice how the boiler is tilted to compensate for the steep mountain grade of the tracks going up the mountain. The boiler needed to be even, so they tilted the boiler to compensate. The original locomotive #1 Hero (nicknamed Peppersass) first reached the summit in 1869. While it was primarily designed to build the railway, Peppersass saw passenger service until it was retired in 1878. Until 2008, the Cog was a steam railroad. As more locomotives were added over time, the wood-fired engines gave way to coal when the railway began to operate biodiesel engines. These engines were more economical, easier to maintain, and environmentally friendlier. The biodiesel engines take anywhere from 18-22 gallons of biodiesel fuel to complete the nearly 7-mile round trip; by comparison, the steam locomotives consume 1000 gallons of water and a ton of coal to make the same trip.
Posted by Joe at 6:00 AM

I had the privilege of ascending (hiking up) that peak on an optional school trip in grade 11. It was quite a bit of fun (it was a nice weather day in June 1989). Well worth the trip!