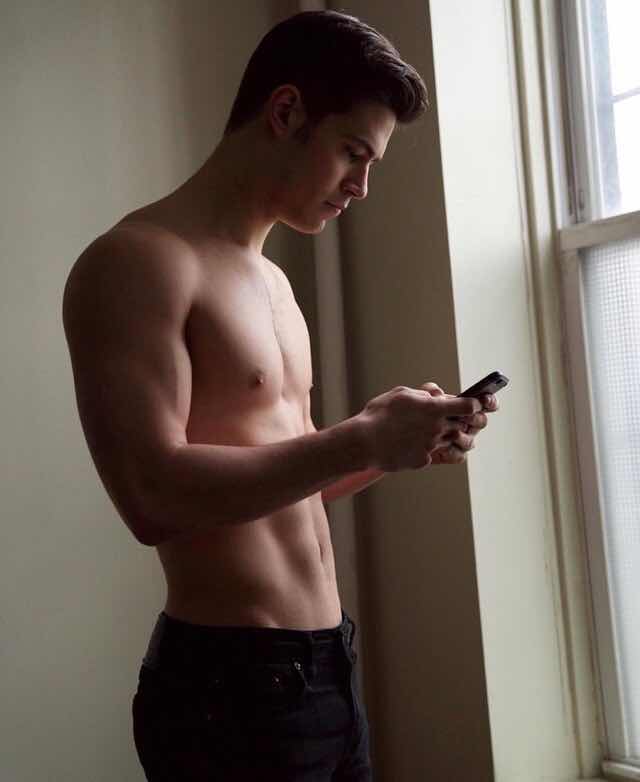 There is no poem post today. I have something very important to tell you about. I will likely post a poem tomorrow.

National Coming Out Day (NCOD) turned out to be more emotional than I could have expected. My niece, now my nephew, came out as trans (FTM) on Facebook. I don’t have the habit of checking Facebook often, but for some reason, I did check it first thing yesterday morning. At the top of my timeline was a post from my niece. While I was reading it, her name changed to his new name. I was immediately concerned for two reasons: 1) if this were true, this would not go well with his parents, and 2) if it wasn’t true, my niece was an insensitive jerk making a bad joke. I kept an eye on his Facebook page, and in a few hours, the post was gone. The name had reverted to the old name. No one commented on the post, so I am not sure how many people saw it. He’d posted it after midnight when presumably his parents had gone to bed, and I’m sure as soon as they saw it (my sister is always on Facebook), they made him take it down. I had a feeling it might be true since the terminology used was correct and the timing of the post as soon as it was officially NCOD. But I had to know for sure. I didn’t want him to be alone and scared if this was true.

I called my mom to find out what was going on, but she was in the dark about the whole thing. My mother’s response was, “I hope it’s not true.” I then told her the statistics of trans suicides and reminded her I had tried to commit suicide when I was a teenager. I told her she had to lend her support and that my sister needed to know what the consequences could be if she denied this child the necessary support. My mother told me to call my niece and ask her what was going on. My mother did say, “Don’t encourage her in this.” I said, “Mama, I will give her all the love and support she needs. I am not going to discourage her. She needs to know she is loved, accepted, and supported 100 percent.” My mother didn’t say anything more after that.

I hung up with my mother and called my niece. The phone was answered and immediately hung up. I then received a text asking if I was ok. I replied, “I was calling to see if you were OK.” He said, “Uh, physically yes.” I told him, “I saw your Facebook post. Please know you can always talk to me about anything.” He said his mom and dad freaked out, and I said, “Is it true? If it is, I love you and support you 100 percent.” He confirmed it was true and thanked me for supporting him. Then, I did something I had not planned to do until this kid went to college and was away from my sister and her husband. I told him I’d come out as gay twenty years ago and lived as an out gay man here in Vermont. He was shocked but thought that was “amazing.” How anyone doesn’t realize I am gay always boggles my mind, but he is 14 and sees me about once a year. We texted back and forth for a while, and I told him how much I supported him. I said he could always talk to me and count on me. I would do anything I could.

The good thing is that his aunt, my brother-in-law’s sister, was the first person he came out to in the family. She is, and has been, very supportive. He has always been closer to his aunt than with me probably because she lives near him. I rarely lived close by except for the six years when I moved back to Alabama after graduate school. However, my sister has never let her kids be around me unsupervised which has always made me think she suspects me of being gay and doesn’t want her children around me. My nephews both love their Uncle Joe, and you can see the excitement, joy, and love on their faces when they see me. I am glad he has his aunt as a strong ally. She is a force to be reckoned with and has always lived her life as she wanted to whether her parents liked it or not. I am glad my nephew has her support.

My nephew said it’s been getting more difficult the past two years with his parents, and he is hoping to find someone to take custody of him if he can convince his parents to sign custody over to someone. Hopefully, his aunt can be that person. She was in the legal field and has many lawyers as contacts which I am sure can help. I hope she can get custody of my nephew and give him the help he needs. I wish I had the financial ability to take him in up here. If he’d been kicked out, I would have gone and gotten him, but thankfully, they did not kick him out. I just hope he has the support network he needs. I told him if he needed anything from me to just let me know. I told him I loved him, and I thought he was a very brave boy.

Yesterday turned into an actual Coming Out Day for my family. Not only did my nephew come out to me, but I came out to him. When I wrote yesterday’s post, I had no idea that NCOD 2021 would be such an emotional day. I am so proud of my nephew. At fourteen, not only did I not understand I was gay, but I would have never been brave enough to come out to anyone.

I hope your nephew is doing okay and will keep him in my thoughts.

Dear Joe, Wowsie! I recall your previously blogging that you could never come out to your family since your sister and her husband would immediately cut off any contact with their two children, whom you very much like. I assume that you always acted as "straight" as you could when being with them, which would explain why they did not realize the situation. While your sister and brother in law now face a certain grim retribution for their attitudes, my real and deep sorrow is for your nephew (former niece) who will, I fear, face four years of HELL from his family until reaching the age of eighteen and adulthood, even if his aunt does manage to obtain custody of him. I can't imagine that judges are likely to approve such custody. Perhaps you could find out from his aunt what the situation is, what she proposes to do, and how you can help. Roderick

Roderick, I’m just glad I have my nephew’s confidence. He’s been texting me a bit. He texted me to tell me he’s finally going to be allowed to get the COVID vaccine. I’m not sure what will happen as far as custody goes. If the parents agree, then it’s likely to be approved. Although if it were going through the Vermont courts, I’d have no problem. Alabama courts are more conservative.

Joe, Further to the above comment, I foresee that you are going to be blamed and denounced for "corrupting" your niece and for leading her into sin, simply by your encounters which gave her tacit encouragement! I kid you not! Her parents will never accept that the coming out is genuine and of his volition, Roderick

Roderick, I have no doubt you’re correct, but I also know that I know all the arguments they’ll probably make, and I’ve studied all the arguments and how I can refute them. If they start religious arguments with me, I can put them in their place. They aren’t following the teachings of Jesus, and they should be ashamed of themselves.

I’ve already been working on my mother that if she can’t show support, she has to show love. I’ve told her that she can’t treat him like she treated me or she’ll lose him forever. She’ll also lose me. She should realize she has mostly lost me. After all I moved 1200 miles away. I also told her she’ll never understand what he’s going through but she needs to do her damndest to understand as much as possible.

Exactly, as a Christian your mother has to love her nephew.

I'm glad you were able to be supportive to him in this time of need, and that his aunt is there for him as well.

Joe, thank you for sharing this story. Your nephew is brave. I am 22 years old, gay, and have found some acceptance over the years, though I am still closeted to most of my family.

Oh Dillon, I’m so sorry to hear about your aunt. Losing someone who accepted you unconditionally and who you could finally be your true self around is extremely hard.