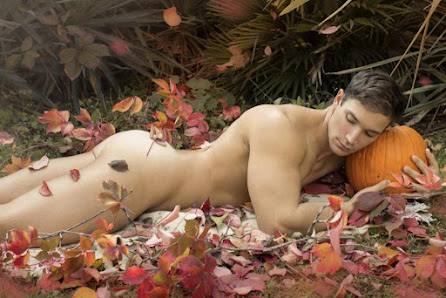 I thought by now my reverence would have waned,

matured to the tempered silence of the bookish or revealed

how blasé I’ve grown with age, but the unrestrained

string from God, slowly shifting and soaring, when the decayed

apples of an orchard amass beneath its trees like Eve’s

first party, when driving and the road Vanna-Whites its crops

and turn the land to a man’s unruly face, makes me believe

I will never soothe the pagan in me, nor exhibit the propriety

of the polite. After a few moons, I’m loud this time of year,

unseemly as a chevron of honking. I’m fire in the leaves,

obstreperous as a New England farmer. I see fear

in the eyes of his children. They walk home from school,

as evening falls like an advancing trickle of bats, the sky

pungent as bounty in chimney smoke. I read the scowl

below the smiles of parents at my son’s soccer game, their agitation,

the figure of wind yellow leaves make of quaking aspens.

“Of late, I’ve been actively recording my responses to the seasons. Fall is particularly spectacular in northern New England; the countryside of Vermont hits my bones like warm bands of neon; there’s that palpable change in the air, electric and mysterious. However, in late autumn, one senses the impending, long wintry gloom overtake all reason. At some point, I began to understand Robert Frost and what critics such as Lionel Trilling and Joseph Brodsky argued, which is the darkness that hits the spirit. I think the poem is also an attempt to get out from underneath the shadow of the poet who looms in New England and to trouble the iconicity of the ‘quaintness’ of Vermont.”

Major Jackson is the author of five books of poetry, including The Absurd Man (2020), Roll Deep (2015), Holding Company (2010), Hoops (2006) and Leaving Saturn (2002), which won the Cave Canem Poetry Prize for a first book of poems. His edited volumes include: Best American Poetry 2019, Renga for Obama, and Library of America’s Countee Cullen: Collected Poems. A recipient of fellowships from the Fine Arts Work Center in Provincetown, Guggenheim Foundation, National Endowment for the Arts, and the Radcliffe Institute for Advanced Study at Harvard University, Major Jackson has been awarded a Pushcart Prize, a Whiting Writers’ Award, and has been honored by the Pew Fellowship in the Arts and the Witter Bynner Foundation in conjunction with the Library of Congress. He has published poems and essays in American Poetry Review, The New Yorker, Orion Magazine, Paris Review, Ploughshares, Poetry, Poetry London, and Zyzzva. Major Jackson lives in Nashville, Tennessee where he is the Gertrude Conaway Vanderbilt Chair in the Humanities at Vanderbilt University. He serves as the Poetry Editor of The Harvard Review.