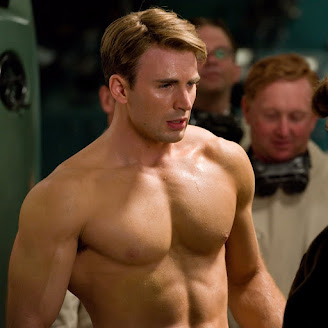 I’m sure most of you out there know who Chris Evans is. He's best known as Captain America, and he’s also one of the hottest of the guys named Chris in Hollywood. You know the ones I’m talking about. Chris Pine, Chris O'Donnell, Chris Hemsworth, and Chris Pratt are the most famous, but then there are the lesser-known guys named Chris: Chris Lowell, Chris Klein, Chris Carmack, and I’ll even throw in Chris Colfer, even though he’s not necessarily my type. Of these guys, Chris O'Donnell will always have a special place in my fantasies because he played Buddy Threadgoode in Fried Green Tomatoes: 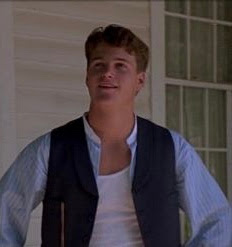 However, Evans, Pine, and Hemsworth always make parts of me stir when I see them on the screen. Just look at this picture of Chris Pine from Wonder Woman:

Or Chris Hemsworth at the beach: 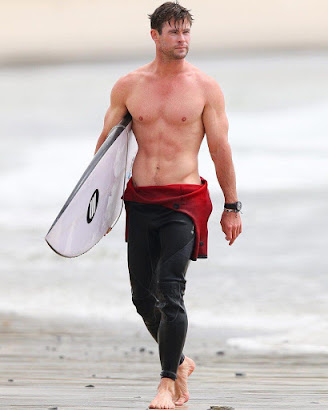 Evans is a staunch supporter of LGBTQ equality and the Democratic Party. In 2012, Evans affirmed his support for same-sex marriage, stating: "It's insane that civil rights are being denied people in this day and age. It's embarrassing, and it's heartbreaking. It goes without saying that I'm completely in support of gay marriage. In ten years, we'll be ashamed that this was an issue." In August 2016, Evans supported Massachusetts Attorney General Maura Healey's continued enforcement of the state's ban on assault weapons. Evans endorsed Hillary Clinton in the 2016 presidential election and has been critical of President Donald Trump. After Alabama enacted the Human Life Protection Act in May 2019, which imposes a near-total ban on abortions in the state, Evans wrote on Twitter that the bill was "absolutely unbelievable" and continued by writing, "If you're not worried about Roe v. Wade, you're not paying attention."

Evans has gotten some negative media attention in the past several months for a picture taken of him, but I think it’s because people spoke before they knew the story, which is often a problem. As I said, Evans is an outspoken Democrat but has held back on some of his political criticisms, even of Donald Trump, since he began his political project A Starting Point in July 2020, which aims to “create a bipartisan channel of communication and connectivity between Americans and their elected officials with the goal of creating a more informed electorate.” In starting this organization, he’s been interacting with politicians on both sides of the aisle, which led to a photo with Republican Senator Ted Cruz and his daughter that had some on Twitter fuming back in February.

Celebrities always seem to get in trouble from either the left or the right for their political opinions. Some celebrities in the past I refuse to watch anymore because of their extreme right-wing views, but I am not going to do like Republicans often do and claim that they should just be celebrities and not have an opinion. Everyone has a right to their opinion, but stars have to weigh the option of whether or not they will lose fans because of their views. The fact that Evans, who is an outspoken liberal, had his picture taken with Cruz has garnered backlash is a tad ridiculous.

On "The Daily Show" on Tuesday, host Trevor Noah brought up the photo and the backlash, asking how Evans balances being Captain America for people even when he disagrees. Evans explained, “In that circumstance, it was a child. I’ll always take a picture with a kid.” He continued: “But in general, just even sitting down with certain politicians ― there are certain people on the extremes of both parties who, there’s no wiggle room for that. And again, what I would argue is, look, if this person wasn’t in power, if this person wasn’t writing bills that affected your life, fine, we can shun them. You know what I mean? We can scream louder than them. But we can’t pretend they don’t have some sort of say, some sort of impact.” Evans made the argument, "Because I think the other way just becomes cyclical, and everyone spirals and no one listens, and I don't think you move the ball down the field as effectively as you would if you say: OK, let's just, you know ... out-talk me," he said. Elsewhere in the segment, Evans explained he would still express his political beliefs when called to do so. Still, the framework of A Starting Point is all about presenting the issues and letting people form their own opinions.

I have to agree with Evans. American politics has become so polarized that there is little dissension in the ranks Republicans or Democrats. Both parties are likely to get blasted by opponents for reaching across the aisle and trying to compromise. Look at the Senate right now. Very little coming out the House is even taken up in the Senate because it is controlled by the Democrats. We need civil discourse in politics, but many Republicans, especially Donald Trump and Mitch McConnell, have made that impossible. In his 1796 Farewell Address, George Washington warned against the dangers of political parties stating, " However combinations or associations of the above description may now and then answer popular ends, they are likely in the course of time and things, to become potent engines, by which cunning, ambitious and unprincipled men will be enabled to subvert the power of the people, and to usurp for themselves the reigns of government; destroying afterwards the very engines which have lifted them to unjust dominion." Nobody followed Washington’s advice. Washington also spoke of foreign policy warning, "It is our true policy to steer clear of permanent alliance with any portion of the foreign world." That warning has often been used by American politicians, often to the detriment of the world.

And if you don’t know, Evans is the brother of openly gay actor, Scott Evans. Scott is best known for playing the role of police officer Oliver Fish on the ABC daytime soap opera One Life to Live. I became a fan when I was living with my parents and writing my dissertation. I would take an hour for lunch and watch Scott on One Life to Live because Oliver Fish became involved in a romantic relationship with another man named Kyle Lewis. I continued to watch until the storyline was dropped, and both Scott and the actor playing Kyle Lewis were let go in 2010. One day, the writers just stopped writing the characters into the script. ABC's only explanation was that the storyline "did not have the appeal we hoped it would." Upon Oliver's departure from the show on Monday, April 12, and Kyle's exit on Friday, April 16, One Life to Live hit new lows in total viewers, and two years later, the soap opera was canceled.