“Let them hate me, so long as they fear me.” 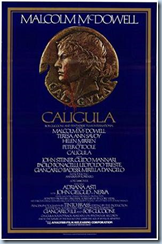 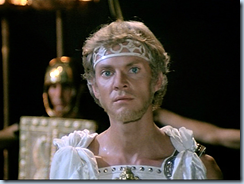 Caligula is a 1979 film directed by Tinto Brass, with additional scenes filmed by Giancarlo Lui and Penthouse founder Bob Guccione. The film concerns the rise and fall of Roman Emperor Gaius Caesar Germanicus, better known as Caligula. Caligula was written by Gore Vidal and co-financed by Penthouse magazine, and produced by Guccione and Franco Rossellini. It stars Malcolm McDowell as the Emperor. Caligula was the first major motion picture to feature eminent film actors (John Gielgud, Peter O'Toole, Malcolm McDowell, Helen Mirren) in a film with explicit sex scenes. 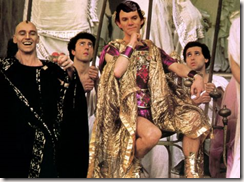 With the cast of John Gielgud, Peter O'Toole, Malcolm McDowell, Helen Mirren, you have to wonder how these actors made a film that was panned by critics; Roger Ebert gave it zero stars, describing it as "sickening, utterly worthless, shameful trash." Perhaps the most scathing comment to ever appear in one of Ebert's reviews is attributed to a third party: "'This movie', said the lady in front of me at the drinking fountain, 'is the worst piece of shit I have ever seen.'" This was one of the few films Ebert ever walked out of; "two hours into its 170 [sic] minute length." Reviewer Leonard Maltin said the film was little more than "chutzpah and six minutes of not-bad hardcore footage." Newsweek magazine called Caligula "a two-and-one-half-hour cavalcade of depravity that seems to have been photographed through a tub of Vaseline." 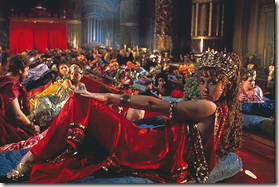