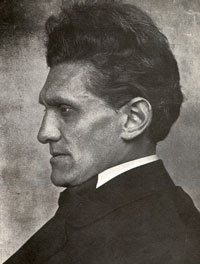 The German poet Stefan George was born in 1868 in the village of Büdesheim near Bingen, a small but ancient town on the Rhine. In 1873 his family moved to Bingen, where his father, who had first been an inn-keeper, became a successful wine-merchant. From 1882 to 1888 George attended the grammar school in Darmstadt. During the following two years, his first journeys abroad led him to London, Italy and most notably to Paris, were he met the poets of the French symbolism, above all Stéphane Mallarmé, who became the model for the beginning of George's literary career. The literary situation in Germany at the time was dominated on the one hand by a shallow classicism, on the other hand by a gross naturalism, both of which were equally repelling to George. Mallarmé's programme of pure poetry' without any social relevance, his conviction that the Orphic interpretation of the earth is the only task of the poet' and that everything that is sacred and wants to stay sacred veils itself into mysteries', was like a revelation and quite appealing to the young George. From 1889 on he was registered for three terms at the University of Berlin, but attended only a few lectures. By the time of the publication of his first volume of poems in 1890 he had already assumed the life style that he was to keep up until his end. Never living in a home of his own – not because he could not have afforded it, as he had inherited a sufficient fortune from his parents, but because of the way he saw himself – he would stay as a guest of his friends and admirers in Berlin, Munich, Heidelberg, Basel, or else traveled abroad, mostly in Italy and in Paris. He avoided all publicity, and his books were only privately published. Moreover, he underlined the esoteric character of his writings by certain orthographic peculiarities and a special ornamental typography.

George's subsequently famous Kreis (Circle) of like-minded friends was beginning to rally about the same time. Still it consisted mostly of fellows of about his own age treated as equals, as distinguished from the later situation, when George was the august master venerated by much younger disciples. 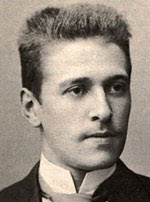 Though, to all appearances, George was of an almost exclusively homoerotic inclination, there is no indication that he ever went beyond the Platonic concept of spiritual guidance and aesthetic contemplation – to which he adhered doubtless partly out of mere social convention, but also for artistic discipline. Nevertheless, sometimes the strong emotions George displayed in his relationships to young men could be disturbing to them, as it is documented in the case of Hugo von Hofmannsthal. George was himself only 23 when he met the still younger but precocious Austrian poet, who was 17 then. It is not really clear what happened, but evidently their relations were troubled, though they kept up a correspondence for some years. Also another friendship of George that had been initially more successful ended in dissonance, when the 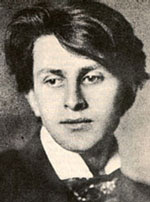 Germanist Friedrich Gundolf whom George had mentored as a teenager, and who had become his most ardent apostle, as a man in his late thirties insisted on marrying despite George's disapproval.
What proved to be George's most passionate, most ill-fated and poetically most fruitful love affair began in 1902, when he approached a boy in a street of Munich: Max Kronberger, a 14-year-old grammar-school student, felt flattered when a man he had noted before asked his permission to sketch his 'interesting' head. On the next day George succeeded in taking a photograph of the boy, but it seems that thereupon George's courage failed him, as he did not try to meet the boy again for almost a year. At the time of their next accidental meeting in the street, Kronberger found out that George was a poet and, since his respectable parents agreed, they saw each other regularly from then on, in a relationship not always free from tension. However, Kronberger died of an acute disease on the day after his sixteenth birthday. What followed was a poetical glorification which was sometimes compared to the literary monument erected by Dante for Beatrice, but resembles rather the deification bestowed by Hadrian on Antinous, in a somewhat different way owing to the difference of times and circumstances, of course.

Your eyes were dim with distant dreams, you tended
No more with care the holy fief and knew
in every space the breath of living ended -
Now lift your head for joy has come to you.

The cold and dragging year that was your share,
A vernal tide of dawning wonders bore,
With blooming hand, with shimmers in his hair
A god appeared and stepped within your door.

Unite in gladness, now no longer darkened
and blushing for an age whose gold is flown:
The calling of a god you too have hearkened,
It was a god whose mouth has kissed your own.

You also were elect – no longer mourn
For all your days in unfulfilment sheathed...
Praise to your city where a god was born!
Praise to your age in which a god has breathed!

This forced gesture and overdone interpretation twisted everything George wrote looking back on his love for Maximin. His spontaneous feelings for an adolescent are better expressed in the verses that he, again in love, in 1905 addressed to the 14-year-old Hugo Zernik:

My child came home
The sea-wind tangled in his hair,
His gait still rocks
With conquered fears and young desires for quest.

The salty spray
Still tans and burns the bloom upon his cheek:
Fruit swiftly ripe
In savage scent and flame of alien suns.

His eyes are grave
With secrets now, that I shall never learn,
And faintly veiled,Since from a spring he came into our frost.

So wide the bud
That almost shyly I withdrew my gaze,
And I abstained
From lips that had already chosen lips.

My arm enclasps
One who unmoved by me, grew up and bloomed
To other worlds –
My own and yet, how very far from me!

George not only turned Maximin into a myth, but also used him as figurehead for his new aims, as expressed in his most ambitious poetry, contained in the volume Der Siebente Ring, (The Seventh Ring) of 1907. Now George's programme was no longer art for art's sake, but a political vision formed in opposition to a time and society he considered vile and decayed, a spiritually void world of mean commercial utilitarianism and brutal power-politics garnished with decorative phrases.

George, who had been opposed to the reality of the Prussian-dominated German Empire, as contrasted with his idea of Germany, was not carried away by the storm of enthusiasm at the outbreak of the First World War in 1914, and felt rather confirmed by the defeat of 1918. In the turmoil of the post-war years, George became the lodestar of the most idealistic part of the young generation, as represented by 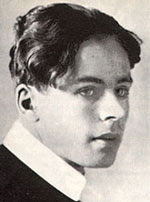 Klaus Mann (born in 1906), who remembered later that “my admiration for him was boundless. I saw him as the leader and prophet, the Caesarean priestly figure as he presented himself. Amidst a rotten and barbarous civilization, he embodied human and artistic dignity, uniting discipline and passion, grace and majesty. Each of his gestures was of an exemplary, programmatic character. He stylized his own biography like a myth: his romance, the boy Maximin, was the core of a philosophy that was a revelation to the circle of disciples. — The reunification of morals and beauty seemed to have been realized in the mystery of Maximin. Here I found the reconciliation of Hellenic and Christian ethos. Stefan George's ordering mind had – or so did I believe – solved the fundamental conflict that Heinrich Heine analyses with intuition and perspicacity, that reigns as tragic leitmotiv over the works of Friedrich Nietzsche. — My youth venerated in Stefan George the Templar whose mission and deed is described in his poem. When the black wave of nihilism was threatening to devour our culture, he arrived, the militant seer and inspired knight.”
At the surface, there were doubtless some similarities between George's 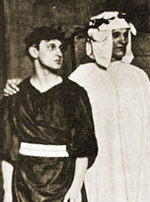 program of a hierarchic reformation based upon a new aristocracy of mind and spirit, and the ideologies of the fascist movements as they were beginning to flourish in several European countries during the nineteen-twenties. Though to him, for his attitude and sentiments, it was impossible to identify his cause with the Nazism that was to take over Germany, the ambiguity became clear in 1933, when some of his followers embraced the upheaval wholeheartedly, while others, like his oldest companion, the Jewish poet Karl Wolfskehl, were forced to emigrate. George himself, who was already fatally ill, declined all honors by which the new rulers tried to gain his support, and, silent but demonstrative, left Germany to end his life elsewhere. He died on the 4th of December 1933, in Locarno, Ticino, Switzerland.