The Photography of the Argentine Marcos López

While doing a little research about sensuality and sports, I came across an article in Dissidence (The Hispanic Journal of Theory and Criticism) entitled "Homosocialism ↔ Homoeroticism in the Photography of Marcos López" by David Williams Foster.  Here is an excerpt from that article:


…One of the most homosocial spaces in modern society is the locker room, which is closely associated with other athletic and gymnasium spaces like the shower, the steam room, the jacuzzi, the massage room, and the infirmary. The bath house/sauna was, before AIDS, one of the great meeting places for gay men, and the fancy gym is, for today's guppy, one major site for same-sex cruising (American university sports centers are notorious in this regard).  The homoerotic dimensions of sports has long been maintained, and it is difficult to forget that the original Olympics were performed in the nude; homoerotic overtones have also long been associated with European soccer, and Bazán recalls the 1995 controversy surrounding the Argentine national team. The sociologist Juan José Sebreli first broached the subject in print in a book from 1981, Fútbol y masas, but develops it as a major theme in his 1998 La era del fútbol .
In López's image—titled El vestuario 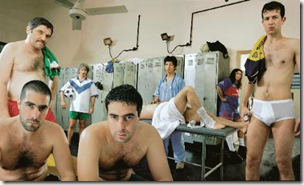 ,—one is particularly struck by the fact that none of the seven men (athletes and trainers) whose faces can be seen (there is an eighth man stretched out on a massage table, his face hidden by one of the other players) looks anywhere else but directly at the camera: no one peeks out of the closet here at the body of another man… Moreover, all of the men visible are hypermasculine, confident in their pose before the camera, with marked secondary sexual characteristics well in evidence, such as hairy chest and legs, heavy beard, mustaches, muscular torso and legs, with appropriate tertiary accoutrements such as athletic wear, soccer ball, the ankle bandage and what appears to be a tube or container of ointment that are metonymies of strenuous physical activity. The file of identical lockers against the back wall iconicizes the continuity between these men where the sameness of their macho presence guarantees the easy circulation of the norms of homosociality without any trace of the discrepancy from these norms that would signal the contramasculine, the effeminate, the threat of homosexuality. True, one of the men, to the left of the image, somewhat older than the others, is fleshier than one associates with a sustained athletic life, while, in the right-hand background there is a frankly paunchy individual with long hair (he is, nevertheless, properly uniformed for athletic play). But these are, if they are discordant notes, minor ones that only serve to affirm the overall conventional hypermasculinity of the men we see in the foreground.  In short, this is a world of men and for men, and if resolute homosociality were ever to segue into homoeroticism, it is not likely to include any sign of the feminine. It is precisely the homoerotic undertones of the hypermasculine universe of soccer that both Bazán and Sebreli speak of, and, while Archetti underscores the way in which soccer—like many all-male sports—transculturally serve to assimilate young men to the codes of masculine homosociality, there is no way of categorically specifying when the frisson of the homoerotic will occur.

One of López's most outrageous compositions is Tomando sol en la terraza,  which was used for the invitation and publicity for the exhibit for the early 2005 show of his work at the White Box….Yet, by contrast, the [image] more readily evoke[s] the homoerotic, which is located here in the display of the partially naked male body. Indeed, the lack of an explicit homosocial context would indicate, precisely, that sunbathing  is not routine masculine behavior.  And although the image of the partially naked male body is legitimated in certain contexts, such as that of the athletic locker room, it does not customarily involve the privileged exposure of the penis.
Tomando sol is constructed around the common occurrence of sunbathing, which in an apartment-dwelling metropolis like Buenos Aires often means stretching out on a towel on the rooftop of one's high-rise building. Certainly, the majority of sunbathers are women, and sports and other physically active undertakings are the most appropriate way for the male body to gain whatever are considered the beneficial aspects of direct exposure to the sun;
concomitantly, to lie inert in the sun is a female/womanlike activity. True, López's male sunbather is surrounded by the details of a masculine world: various bottles of beer and a bottle opener, along with a half-consumed glass of brew. There is an ashtray with the butts of two consumed cigarettes, a carton of Marlboros (unquestionably a real man's tobacco of choice), and there is a stack of magazines at hand, the top one of which appears to be a sports magazine, as its cover carries a routine soccer image. One rather whimsical detail is the garden hose (often laughingly referred to as a penis substitute), which runs alongside the reclining man and loops its way around one of the beer bottles, as though it were a sunning serpent; its two tones of green partially match the colors of the blanket on which the man lies sunning.
The model here is, in all regards, one of López's by-now familiar hypermasculine bodies: trim and muscular, with firm and hairy legs and a nicely matted chest; his strong facial characteristics are manly in every regard: in sum, a man's man. What is jarring, however, is the way he is dressed and what that dress leaves exposed. Nude sunbathing on a private rooftop may be preferred by some men, although heterosexual men are less likely than women (or homosexual men) to worry about tan lines: indeed, the tan line on a naked male body might be viewed by some as sexy, since it frames the now exposed but usually concealed genitals or buttocks. But the covering of the lower regions of the body means wearing a swimsuit; even underwear might be permissible. However, López's model is swathed in athletic bandages from his midriff to halfway down his thighs, something like an improvised locker-room version of surfing shorts, although tighter and neutral in color, as opposed to the often colorful and baggy original. Moreover, the athletic bandage around the model's middle picks up on the more reasonable presence of the wrapping around both his ankles and instep, such as one might find on an athlete's foot to prevent or remedy a sprain from action in sports.
But what is specifically transgressive about Tomando sol is the way in which the model's penis is exposed. The athletic bandage is wrapped around the 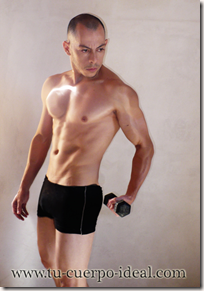 man's waist, buttocks, and upper thighs in such a way that, although some minor glimpses of skin are allowed, his genitals are exposed, with his penis (notably uncircumcised from the point of view of a North American viewer) resting on the edge of a strip of the bandage. One does not normally sunbathe the penis without the rest of the lower body being exposed, and, aside from the medical inadvisability of such exposure, one is unaware of any known fetish of the sunbathed (or sunburned) penis. López is known for his over-the-top whimsicalness, and it is amply evident in this composition, with its showcasing of the model's respectably sized penis and the echoes of the strongly masculine phallus in the beer bottles, the cigarettes, and the garden hose. The contemplation of the male body required by this composition, one that underscores the phallic, disrupts the heterosexist homosocial convention whereby the male body is masculine (a condition of the appropriate of the homosocial pact), but it is not erotic: the genitals are assumed to be there, and with acceptable potency, but they can never be the
object of confirming scrutiny. Whenever the male body is the occasion for the spectacular gaze, as the female body routinely is, it is placed at the disposal of a homoerotic interest that is inadmissible within the manly homosocial pact.