Sports seem to have existed from the beginning of time. The original sports were established as a way to train soldiers. Some sports like bull jumping were purely for pleasure and the beauty and sensuality of the sport. Most of them served as entertainment. The winners basked in the glory of their victory. A great athlete was at the height of sexual desire from men and women.
Bull Jumping 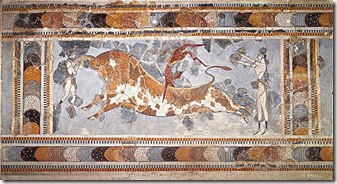 Bull-jumping is thought to have been a key ritual in the religion of the Minoan civilization on Bronze Age Crete. 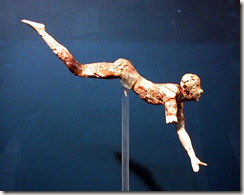 As in the case of other Mediterranean civilizations, the bull was the subject of veneration and worship. Representation of the Bull at the palace of Knossos is a widespread symbol in the art and decoration of this archaeological site.
The assumption, widely debated by scholars, is that the iconography represents a ritual sport and/or performance in which human athletes literally vaulted over bulls as part of a ceremonial rite.
Gladiators 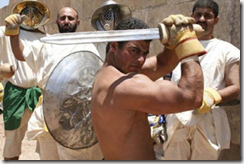 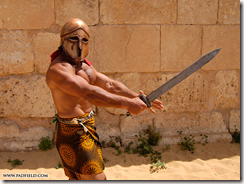 The gladiators were paired off to fight each other, usually to the number of about 100 couples, although in the imperial shows there were sometimes as many as 5,000 pairs. There were various types of gladiators, armed and armored differently. Thus a heavily armored man, a Mirmillo or Samnite, might be opposed to a Retiarius, who fought almost naked, with a net and a trident as his only weapons. He also

might be pitted against a Thracian, who fought with a dagger and a small round shield. Often gladiators were made to fight wild beasts. A defeated gladiator was usually killed by the victor unless the people expressed their desire that he be spared.
At first, gladiators were invariably slaves or prisoners, including Christians. They normally underwent rigid training, and some gained immense popularity. Later, impoverished freedmen also sought a living as gladiators, and finally even members of the ruling classes took part in gladiatorial combats on an amateur basis. Some gladiators, led by Spartacus, took part in the third of the Servile Wars (73 B.C.-71 B.C.). Constantine I forbade gladiatorial games, but they nonetheless continued until A.D. 405. 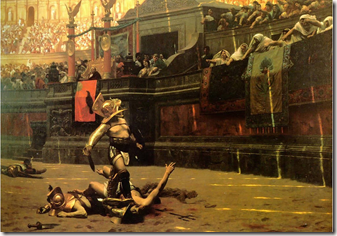 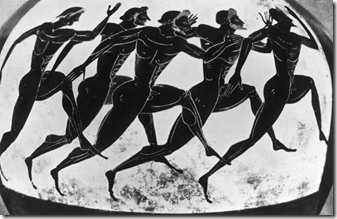 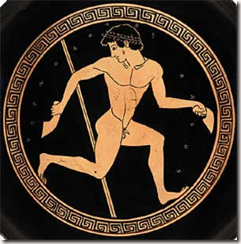 Although records cannot verify games earlier than 776 B.C., the contests in Homer's Iliad indicate a much earlier competitive tradition. Held in honor of Zeus in the city of Olympia for four days every fourth summer, the Olympic games were the oldest and most prestigious of four great ancient Greek athletic festivals, which also included the Pythian games at Delphi, the Isthmian at Corinth, and the Nemean at Argos (the Panathenaea at Athens was also important). 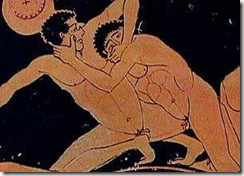 The Olympics reached their height in the 5th-4th cent. B.C.; thereafter they became more and more professionalized until, in the Roman period, they provoked much censure. They were eventually discontinued by Emperor Theodosius I of Rome, who condemned them as a pagan spectacle, at the end of the 4th cent. A.D.
Among the Greeks, the games were nationalistic in spirit; states were said to have been prouder of Olympic victories than of battles won. Women, foreigners, slaves, and dishonored persons were forbidden to compete. Contestants were required to train faithfully for 10 months before the games, had to remain 30 days under the eyes of officials in Elis, who had charge of the games, and had to take an oath that they had fulfilled the training requirements before participating. At first, the Olympic games were confined to running, but over tim 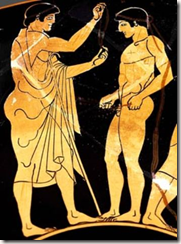 e new events were added: the long run (720 B.C.), when the loincloth was abandoned and athletes began competing naked; the pentathlon, which combined running, the long jump, wrestling, and discus and spear throwing (708 B.C.); boxing (688 B.C.); chariot racing (680 B.C.); the pankration (648 B.C.), involving boxing and wrestling contests for boys (632 B.C.); and the foot race with armor (580 B.C.).
Greek women, forbidden not only to participate in but also to watch the Olympic games, held games of their own, called the Heraea. Those were also held every four years but had fewer events than the Olympics. 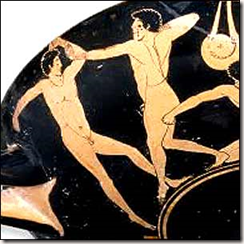 Known to have been conducted as early as the 6th cent. B.C., the Heraea games were discontinued about the time the Romans conquered Greece. Winning was of prime importance in both male and female festivals. The winners of the Olympics (and of the Heraea) were crowned with chaplets of wild olive, and in their home city-states male champions were also awarded numerous honors, valuable gifts, and privileges. 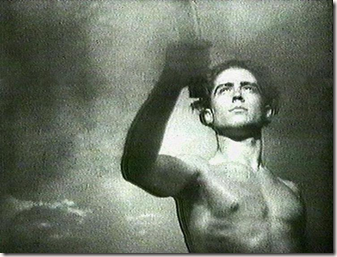 In ancient times, it was believed that athletes literally exuded sexuality.

Something HOT about a gladiator in leather...
JP