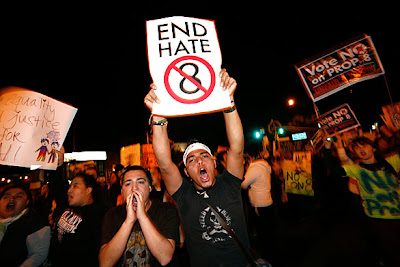 San Francisco, California –Today the U.S. federal district court overturned Proposition 8 on the grounds that the ban prohibiting same-sex couples from marrying is unconstitutional. The case now moves to the Ninth Circuit Court of Appeals.

In response to the ruling, Geoff Kors, executive director for Equality California, which filed an amicus brief supporting the Prop. 8 federal challenge, issued the following statement:

“We are thrilled with today’s ruling, which affirms that the protections enshrined in our U.S. Constitution apply to all Americans and that our dream of equality and freedom deserves protection. Judge Walker has preserved our democracy by ruling that a majority cannot deny a minority group of fundamental freedoms. This is as much a victory for the soul of our nation as it is for the thousands of same-sex couples and their families who will be directly impacted.

“We are truly indebted to Ted Olson and David Boies and to the American Foundation for Equal Rights. We owe Governor Schwarzenegger and Attorney General Jerry Brown a great deal of gratitude for their unprecedented decision not to defend this discriminatory measure. While this is a great success, we also know that the road to restore the freedom to marry could be a long one and that we must do everything in our power to protect this incredible victory. Equality California will do its part by working to elect a governor and attorney general this fall who refuse to spend tax-payer dollars to overturn this decision. We are also ready to battle the National Organization for Marriage this fall to keep their toxic agenda out of our state.

“Finally, together with thousands of volunteers we will keep sharing our stories in communities throughout California so that we continue building public support for the freedom to marry, which is essential to permanently restoring marriage equality in California.”

This was originally posted on WichedGayBlog.com.  However, one of the things I wanted to be able to do on this blog was to do political posts, and I thought this was a good time to start.  I don’t live in California, so I really don’t think I can adequately speak for the ruling today about Prop 8.  I do think it is a step in the right direction, but I do not hold a great deal of faith in where this will ultimately end up, i.e. the US Supreme Court.  I hope that I am underestimating the Supreme Court.

Hi
just wanted to introduce myself - and this is a good post to respond to as well
I'm Geoff, I just finished my PhD and I'm lecturing in Literature/Cultural Studies at my uni in Australia. I'm also working on a project combining a look at how gay men do their masculinity on manhunt and gaydar, and what other possibilities there might be, based on a tradition of wounded male bodies that can be found from whitman through to artists like wojnarowicz... so *waves*
Also, one never knows re prop 8 - the judge who made the decision was appointed by dubya's dad (who would've thought he would ever be seen as a moderate?) and the supreme court may refuse to deal with it, saying that marriage is a state issue - there are enough of them on the court who would want to avoid this kind of hullabaloo to just go, nup, not our deal.
anyway, we shall see :-)
hope yr new job is going ok
Geoff

Geoff, welcome to The Closet Professor. You have an interesting topic of research. Email me (jec1918@gmail.com) sometime because I would love to discuss it further with you. I am in the process of completing my dissertation for my PhD, and I hope I will find a job at a university or small liberal arts college somewhere.

My new job is going fairly well, it really starts on Monday. Though we had some pre-work to do last week. There were some hiccups Friday, but I think it will be smoothed over. Sometimes small minds (theirs) and liberal minds (mine) butt heads.

Again, welcome. I hope I will be hearing more from you.