The majority of us as gay men use condoms to protect us against STDs and HIV.  So I thought a little history of the condom would be quite interesting.  I hope that you find this as interesting as I do.

For men, who were, historically, freer to partake in sexual activity than women, the primary reason for using birth control was to avoid disease and illegitimate children, and, to a lesser extent, to reduced the economic burden of having too many children.

Some social rules regarding birth control relied on the abstinence or control of the male. For instance, some indigenous Australian communities forbade men to have sex with their wives for several months after the birth of a child. In many areas in early Europe, royalty and men of standing (e.g., among 10th-century Ottonian Saxons) would have sex with their wives only for procreation, usually resulting in a rapid succession of births, after which they would spare their wives from having too many children by turning to prostitutes for recreation. Also in early Europe, men often turned to prostitutes to limit the number of children in the family, so as to prevent the family fortune from being split among too many heirs. 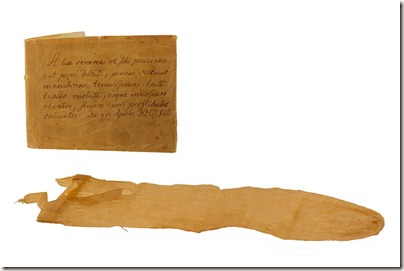 Hopeful, but unreliable, natural methods of birth control included coitus reservatus (withholding ejaculation) and coitus interruptus (ejaculating outside the vagina). Coitus interruptus was common during the time of Mohammed, and Islam endorsed the practice, unless the woman disagreed. Meanwhile, the Book of Genesis tells of the fate of Onan, who practiced coitus interruptus with his dead brother's wife to prevent her from becoming pregnant: he was put to death for "spilling his seed on the ground."

Historians believe that ancient Egyptian men wore fabric condoms, mainly for protection from disease, as long ago as 1000 BCE. The Romans used condoms made of animal intestine. In the 1500s, Fallopius, an Italian, invented a linen sheath to be worn to prevent the transmission of syphilis – later in the century the cloth was soaked in a chemical solution that was considered to be a spermicide. 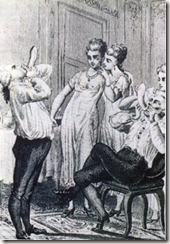 By the 1700s, most condoms were made out of animal intestines – they were expensive, but could be washed and reused. (Often they came with a silk ribbon with which to tie them on.) King Charles II used animal-skin condoms to prevent having illegitimate heirs or contracting diseases. Of course, Charles II is not a testimony to the efficacy of animal-skin condoms: he had at least 13 illegitimate children.

In 1844, vulcanized rubber condoms hit the markets. Men generally wore them to avoid catching diseases such as gonorrhea and syphilis. As a result, for years afterward, condoms became associated with prostitution and disease.

The first condom advertisement appeared in 1861 in The New York Times – the product was "Dr. Power's French Preventatives." Laws were passed in the US 12 years later making it illegal to advertise contraceptives and allowing the postal service to confiscate condoms sold through the mail. A similar law was passed in 1882 in Canada, making it illegal to sell or advertise birth control, unless it was "for the public good."

The first latex condom was invented in the 1880s, but they were not widely used until the 1930s. During World War I, the American troops were not allowed to use condoms, as many Americans believed that "loose" sexual behavior deserved the effects of disease. But by World War II, US troops were encouraged to use condoms. A training film urged, "Don't forget – put it on before you put it in."

Timeline for the History of Condoms

The use of condoms has been traced back several thousand years. It is believed that around 1000 BC the ancient Egyptians used a linen sheath for protection against disease.

The earliest evidence of condom use in Europe comes from scenes in cave paintings at Combarelles in France.  There is also some evidence that some form of condom was used in imperial Rome.

The syphilis epidemic that spread across Europe gave rise to the first published account of the condom. Gabrielle Fallopius described a sheath of linen he claimed to have invented to protect men against syphilis.Having been found useful for prevention of infection, it was only later that the usefulness of the condom for the prevention of pregnancy was recognized.

Later in the 1500s, one of the first improvements to the condom was made, when the linen cloth sheaths were sometimes soaked in a chemical solution and then allowed to dry prior to use. These were the first spermicides on condoms.

The first published use of the world 'condum' was in a 1706 poem.It has also been suggested that Condom was a doctor in the time of Charles II. It is believed that he invented the device to help the king to prevent the birth of more illegitimate children.

Even the most famous lover of all, Casanova, was using the condom as a birth control as well as against infection.

Condoms made out of animal intestines began to be available. However, they were quite expensive and the unfortunate result was that they were often reused. This type of condom was described at the time as "an armor against pleasure, and a cobweb against infection".

In the second half of the 1700's, a trade in handmade condoms thrived in London and some shops where producing handbills and advertisements of condoms.

The use of condoms was affected by technological, economic and social development in Europe and the US in the 1800s.

Condom manufacturing was revolutionized by the discovery of rubber vulcanization by Goodyear (founder of the tire company) and Hancock. This meant that is was possible to mass produce rubber goods including condoms quickly and cheaply. Vulcanization is a process, which turns the rubber into a strong elastic material.

In 1861,the first advertisement for condoms was published in an American newspaper when The New York Times printed an ad. for 'Dr. Power's French Preventatives.'

In 1873, the Comstock Law was passed. Named after Anthony Comstock, the Comstock Law made illegal the advertising of any sort of birth control, and it also allowed the postal service to confiscate condoms sold through the mail.

Until the 1920s, most condoms were manufactured by hand-dipping from rubber cement. These kinds of condoms aged quickly and the quality was doubtful.

In 1919, Frederick Killian initiated hand-dipping from natural rubber latex in Ohio. The latex condoms had the advantage of ageing less quickly and being thinner and odorless. These new type of condoms enjoyed a great expansion of sales. By the mid-1930s, the fifteen largest makers in the U.S. were producing 1.5 million condoms a day.

In 1957, the very first lubricated condom was launched in the UK by Durex.

From the early 1960s, the use of condoms as a contraceptive device declined as the pill, the coil and sterilization became more popular.

The use of the condom increased strikingly in many countries following the recognition of HIV and AIDS in the 1980's. Condoms also became available in pubs, bars, grocery stores and supermarkets.

The female condom has been available in Europe since 1992 and it was approved in 1993 by the US Food and Drug Administration (FDA).

In 1994, the world's first polyurethane condom for men was launched in the US.

The 1990s also saw the introduction of colored and flavored condoms.

In more recent years, improved technology has enabled the thickness of the condom to decrease. Also, condom manufacturers have recognized that one size of condom does not fit all. You can now find condoms that are different shapes, widths and lengths.