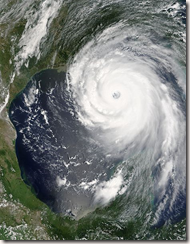 At this moment, five years ago, I sat having brunch with my roommate, not knowing that in the next twelve hours, my world would be turned upside down.  We returned home form brunch, she passed out from too many mimosas, and I sat and watched in horror as a hurricane covered the whole Gulf of Mexico.  It was coming straight for us and was steadily strengthening.  I tried to wake my roommate to see if she wanted to evacuate, but once she had been drinking, not much would wake her until she had recovered.  The news from the Weather Channel got increasingly worse.  We had to get out of there. Finally, she woke up and realized the same thing. 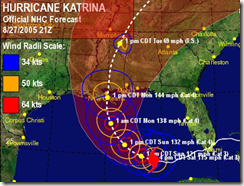 I had lived through hurricanes before, nothing though on this magnitude.  What most people don’t realize is that living inland an hour or two away from the coast can still be a devastating place.  The tidal surge is not as much of a concern for us as is the tornadoes and winds that come with the storm as it makes its way inland.  We decided not to wait out the storm and left town, almost too late.  The wind and rain had already begun.  We took a more rural course to avoid the massive traffic delays.  Finally, late into the night, we reached Texas and found a hotel room.  There, we were stuck for the next five day, in a town whose cable service refused to have any other news service but Fox News.  We watched as the levees broke in New Orleans, hoping to hear reports from home.  They didn’t come. 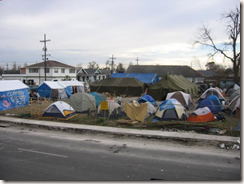 On Thursday, we decided that it was time to head back home.  The closer we got, the more devastation and destruction we saw.  Roads were closed due to the number of trees that had fallen and not enough manpower was available to clear them.  Other roads that had been opened were closed to most traffic except for relief workers and emergency personnel. The devastation we saw was indescribable, and we weren’t even headed to New Orleans or the Gulf Coast. The most difficult part of the journey was finding a gas station that had both electricity and gas.  Most of the stations had run out and did not know when more could be delivered.  Most of the other stations had not had electricity restored to them and remained closed. 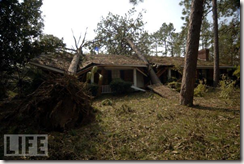 Finally, we got near home to see the street next to us with hundreds of pine trees piled up and completely blocking the road.  It looked more like a lumber yard than a residential neighborhood.  A tornado had landed in our neighborhood.  We passed a nearby church, that had been set up as a tent city.  Tents were all that many people had left.  Food and water was in short supply and everyone was trying to help out. Then we turned on our street.  I was wholly unprepared for the sight that was there.  The houses around us were largely spared.  Our house was barely visible from the pine trees that lay on top of it.  Thankfully, it was a sturdy house and the walls had survived.  One tree had gone through the roof like an arrow, leaving a hole in the roof that pierced though the air conditioner ducts and and eventually stuck out of the living room.  That one tree had done the most damage, for as the rain continued, the water flowed through the air conditioner ducts and out the vents, leaving what looked like waterfall paintings down the walls.  The carpet was sopping wet and with the humidity and heat, minus air conditioning, the house felt like a sauna.   The hundreds of books in my home office were destroyed with water damage, and most of my clothes were ruined by the same waterfalls that had come through the air conditioner ducts.  Those that weren’t destroyed by the water rushing into the house were already beginning to mold from the heat and humidity. 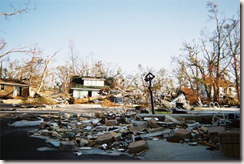 Suddenly, I had found myself homeless, since the house was utterly unlivable.  Family and friends came with trucks, trailers, and extra gas to load up my belongings and take them to a storage unit in the town my parents lived.  My life had suddenly been packed away in boxes and put into storage.  I would not find another permanent place to live for over a year.  During that year, I was forced to live in the schools dorms.  It was all that was available.  Then, a friend of mine had grandparents with an extra house and they allowed me to live there for the next six months.  Finally, things began to settle down and life returned somewhat to normal, but it has been a long process.  It is also one of the reasons that I am still in graduate school because certain milestones of my degree process had to be put off for months because of the turmoil caused by Katrina. 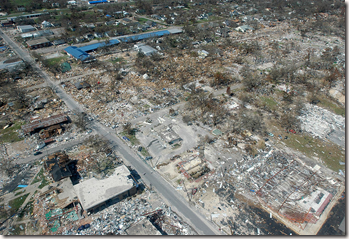 New Orleans is what you hear about most in the news.  It was the larges city hit by the disaster and the floods caused by the levees breaking were extremely destructive.  What most of the news accounts today are forgetting is that the Mississippi Gulf Coast was what was where the hurricane made landfall.  The cities of Bay St. Louis and Waveland were wiped off the map.  They have rebuilt but it was a slow and long process.  The devastation was so great that the two towns discussed merging and becoming Bayland, because the destruction seemed too insurmountable.  They honestly wondered if they could rebuild the cities from the ground up.  The cities of Long Beach, Gulfport, and Biloxi were equally devastated.  Antebellum homes that had stood for over 100 years, and had survived Hurricane Camille in 1969, were lost forever.  Only the foundations remained, nothing else could even be seen of these houses.  Two universities were forced to close because of the devastation wrought by the storm. One never did rebuild and chose to concentrate their efforts on their other campus.  The other took up residence in an old abandoned hospital while they attempted to rebuild in a new location a few more mile inland.

That is quite a story. These firsthand accounts always fascinate me just because it is more personal. Sorry to hear about all of your losses!!! That's terrible!!!

I know my best friend in Mississippi is in the Jackson area and he sent photos of all the toppled trees, the large tree that toppled up against their house, the rain, and everything else. I remember even there, gas stations were out of gas and gas was about $1.00 over what we were paying at the time in California since the stations were gouging consumers out of fear etc.

Mike, I had been watching a special report on the fifth anniversary of Katrina this morning, but realized they never once mentioned anything but the devastation in New Orleans. So I was inspired to give my own firsthand account, in which New Orleans was in the background. The events of five years ago have weighed heavily on my minds today.