The relationship between Achilles and Patroclus is a key element of the myths associated with the Trojan War. 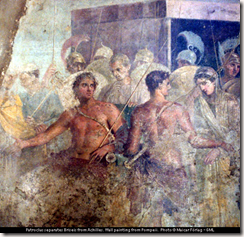 Its exact nature has been a subject of dispute in both the classical period and modern times. In the Iliad, it is clear that the two heroes have a deep and extremely meaningful friendship, but the evidence of a romantic or sexual element is equivocal. Achilles is tender towards Patroclus, while he is callous and arrogant towards others. Commentators from the classical period on have tended to interpret the relationship through the lens of their own cultures. Thus, in Athens during the 5th century BC, the relationship was commonly interpreted as pederastic. While some contemporary readers maintain the same pederastic view, others believe the relationship to simply be a strong friendship between two war heroes. Contemporary readers are more likely to interpret the two heroes either as non-sexual "war buddies", or as an egalitarian homosexual couple.
Due to this strong relationship, the death of Patroclus becomes the prime motivation for Achilles to return to battle. 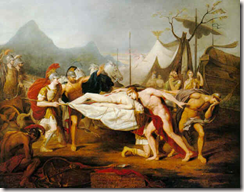 The friendship of Achilles and Patroclus is mentioned explicitly in the Iliad. Whether in the context of a tender friendship or military excellence, Homer makes their strong connection clear.
The death of Patroclus underpins a great deal of Achilles' actions and emotions toward the Trojan war for the rest of the poem. Achilles' strongest interpersonal bond is with Patroclus, whom he loves dearly. As Gregory Nagy points out,


For Achilles ... in his own ascending scale of affection as dramatized by the entire composition of the Iliad, the highest place must belong to Patroklos.... In fact Patroklos is for Achilles the πολὺ φίλτατος ... ἑταῖρος — the ‘hetaîros who is the most phílos by far’ (XVII 411, 655).

(Hetaîros means companion or comrade; in Homer it is usually used of soldiers under the same commander. Later the word is used of concubines.)
Although most warriors fought for personal fame or their city-state (including, at times, Achilles), at certain junctures in the Iliad, Achilles fights for Patroclus. 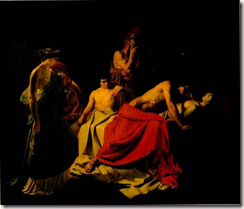 He dreams that all Greeks would die so that he and Patroclus might gain the fame of conquering Troy alone. After Patroclus dies, Achilles agonizes touching his dead body, smearing himself with ash, and fasting. He laments Patroclus' death using language very similar to that later used by Andromache of Hector. For a brief moment Achilles' character shifts from a strong and unbreakable warrior to an emotional and vulnerable character. However, Thetis motivates Achilles to return to the battlefield. Achilles returns to the battlefield with the sole aim of avenging Patroclus' death by killing Hector, Patroclus' killer, even though the gods had warned him that it would cost him his life.
Achilles' attachment to Patroclus is an archetypal male bond that occurs elsewhere in Greek culture: Damon and Pythias, Orestes and Pylades, Harmodius and Aristogeiton are pairs of comrades who gladly face danger and death for and beside each other.  Their bond was also the inspiration for the bond between Alexander and Hephaestion.