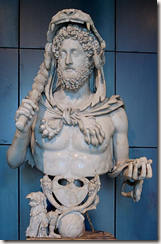 Marcus Aurelius is seen as one of the wisest and greatest of the Roman Emperors, however, his record is sometimes tainted by that of his deviant son. In 180, reversing his father's foreign policy, he concluded peace with the German and the Sarmatian tribes and returned to his licentious pleasures in Rome. There he vaunted his strength in gladiatorial combats and decreed that he should be worshiped as Hercules Romanus. He changed his own name to Marcus Commodus Antoninus and wanted to rename the city of Rome after himself. Many plots to assassinate him failed, but eventually, on the order of his advisers, he was strangled by a wrestler. Pertinax succeeded him.
Commodus had a number of male lovers. He is said to have a harem of 300 girls and the same number of boys and to put on great orgies. In 2000's Academy Award-winner for Best Picture, Gladiator, Commodus serves as the main antagonist of the film. He is depicted as cowardly, greedy and ruthless. He is played by Joaquin Phoenix.
Elagabalus
Heliogabalus or Elagabalus, c.205-222, Roman emperor (218-22). He was a priest of the local sun god, Elagabalus, at Emesa and was named Varius Avitus Bassianus. 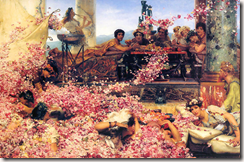 He was a cousin of Caracalla; according to the claims (almost certainly false) of his ambitious mother and grandmother, he was the son of Caracalla. He was chosen by the troops in Syria as emperor in opposition to Macrinus, who had killed and succeeded Caracalla. When Macrinus was defeated and killed at Antioch, Heliogabalus became emperor as Marcus Aurelius Antoninus. His reign was a tragic farce. He imported the cult of which he was priest, and Rome was shocked and disgusted by the indecency of the rites as well as by the private life of the emperor, who gave high offices to an actor, a charioteer, and a barber. His grandmother, Julia Maesa, induced him to adopt his young cousin, Alexander Severus, but Heliogabalus later tried to have the boy killed. Heliogabalus and his mother were murdered in an uprising of the Praetorian Guard. Alexander Severus succeeded. 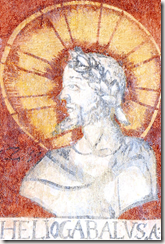 But for sheer shock value, none can compare with Elagabalus, who believes himself to be a living god. Elagabalus is remarkable not only for being only 14 years old when he becomes absolute ruler of the Roman empire but also for his sexual activities while holding that office... shocking in the eyes of respectable Roman society is his 'marriage' to a slave named Hierocles. Elagabalus likes nothing better than to dress as a woman and go around with his 'husband', who is even encouraged to beat the emperor as if he is his real wife. Sometimes Elagabalus plays out scenes in which Hierocles finds him with another man and punishes him for his 'infidelity'.
Philip the Arab Philip or Philip the Arabian (Marcus Julius Philippus), 204?-249, Roman emperor (244-49). He served under Gordian III against the Persians, instigated the assassination of the emperor, and concluded a peace with Persia. The millennium of Rome was celebrated by him with the splendor of secular games in the Circus Maximus. Philip sent Decius to the Danube to quell a mutiny, but when the troops hailed Decius as emperor, he marched at their head upon Italy. Philip met them near Verona and was slain. Philip the Arabian was also known for his fondness for young men.