In my post explaining the picture behind the title of my blog, I mentioned that the bridge is in Amboise, France. The Chapel at Amboise Chateau is the final resting place of the quintessential Renaissance man.
What's a Renaissance man? The term 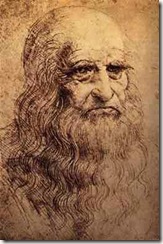 Renaissance man refers to someone who is knowledgeable and accomplished in a wide variety of subjects, in both the arts and sciences. One of history's greatest examples of a Renaissance man is Leonardo da Vinci, who was born on this date in 1452. Best known as the painter of the Mona Lisa, Leonardo was also a sculptor, a draftsman, an engineer, a scientist, an inventor and an architect. He was equally at home in the studies of human anatomy and military engineering, and was as fascinated by firearms and cannon as he was by the flow of water, the way plants grow and how birds fly. Testament to his skills was the title he received from the French king Francis I: first painter, architect and mechanic to the king.
Leonardo da Vinci is best remembered as the painter of the Mona Lisa (1503- 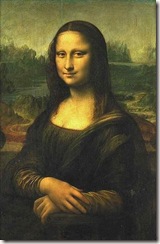 1506) and The Last Supper (1495). But he's almost equally famous for his astonishing multiplicity of talents: he dabbled in architecture, sculpture, engineering, geology, hydraulics and the military arts, all with success, and in his spare time doodled parachutes and flying machines that resembled inventions of the 19th and 20th centuries. He made detailed drawings of human anatomy which are still highly regarded today. Leonardo also was quirky enough to write notebook entries in mirror (backwards) script, a trick which kept many of his observations from being widely known until decades after his death. 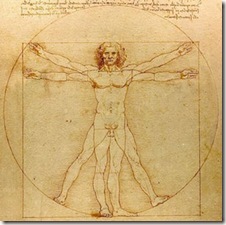 Was Leonardo da Vinci Gay? The late Renaissance painter, poet, designer, architect and inventor, Leonardo da Vinci (1452-1519) is famous for his paintings of the Vitruvius Man, The Last Supper and Mona Lisa, to name just a few masterpieces. Through his art, Leonardo da Vinci depicted the complexities and perfection of the human form and was often thought to represent a melding of both humanity and divinity through mathematics, science, music, paint and poetry. 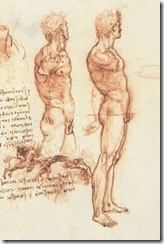 Speculation over Leonardo da Vinci's sexuality began when he was 24 years old after his arrest on charges of sodomy, a serious crime in 15th century Florence. No witnesses appeared to support allegations da Vinci had sexual relations with a seventeen-year-old male model, thus the charges were dropped.
Although allegations of Leonardo da Vinci's homosexuality were never substantiated, rumors continued to circulate among those who analyzed his depiction of young boys in his paintings, his portrayal of an effeminate John in The Last Supper, and the fact that he had several young male protégés and no wife and kids. 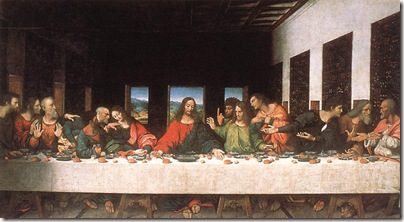 After the hearings, Leonardo kept his personal 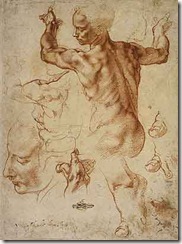 life extremely private. At the time, unfavorable rumors or negative public attention was detrimental to the career of an artist, such as da Vinci, who was dependant upon the support of patrons and the Church.
Today, we are left with mere speculation as to the same-gender-loving feelings Leonardo da Vinci may have expressed in his personal life and his art. Regardless of his sexuality, Leonardo da Vinci should be (and is) remembered as the most influential Renaissance artists in our history.
We all know that the most talented men and artists in the world have generally been gay. So why shouldn’t we believe that the greatest Renaissance man in history was gay. He was one of the greatest architects, artists, engineers in history, and well ahead of his time. Sounds like a gay genius to me.
Since I have already written some blogs about the Renaissance, I will continue to post those over the next several days. After we have revived Europe from the Dark Ages of the Medieval Period, (Renaissance means Rebirth) we will return and study what the Renaissance Europeans studied—the Classics of the Ancient World.

As much as I am a fan of your site this statement is somewhat of a stretch...

DJC, at least someone is actually reading it, LOL. To be truthful, yes, it is an overstatement. I was speaking in jest, or at least not completely seriously. There are a lot of talented men and artists that were not gay, but a good many of the great artists were gay, or at least rumored to be, especially during the Renaissance. Michelangelo, Caravaggio, Da Vinci, just to mention the three on this blog. I didn't mean to offend anyone with that comment. Some of the greatest men in history have been heterosexual, Einstein, Newton, Galileo. I do think that there is a great divide between the great heterosexual and homosexual men, and that is their particular brand of genius. The more artistic geniuses are more likely to be gay or bisexual, while the more scientific are more likely to be heterosexual. It is not always the case, and I am probably digging my hole deeper, LOL. Sorry if I've gotten a little carried away with my response, so I will just stop, but I am glad you feel free to correct my faults, LOL. I'm a southerner, we tend to exaggerate sometimes, LOL.