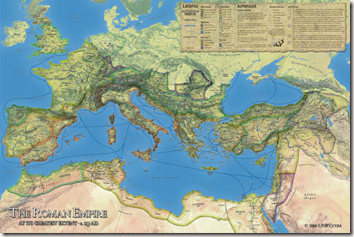 History
Early Republic
Mid and late Republic
As Greek attitudes gradually became accepted in Rome during the late Republic and early Empire, however, a new form of same-sex relations emerged that was quite different from homosexuality in ancient Greece, but owed much to it. As men, particularly the pater familias, wielded complete authority in Roman society, the Roman experience of same-sex relations is often characterized by master/slave-style interactions. Slaves still were considered legitimate sexual partners, often if not always regardless of their wishes. In short, an adult Roman citizen male could acceptably penetrate (whether a male or a female) but not be penetrated - catamite was commonly used as a slander.
Empire 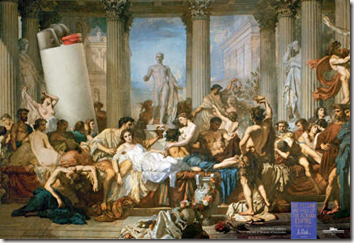 Discussion
Roles and preferences
Subculture
Moral opinions
Negative attitudes towards same-sex relations continued following the adoption of Christianity and in 390, laws were re-enacted, making such relations punishable by death.

Homosexuality in ancient Rome features in many literary works, poems, graffiti and comments on the sexual predilections of single emperors. Graphic representations are, on the other hand, rarer in ancient Rome than in classical Greece. Attitudes toward homosexuality changed over the time and from context to context, ranging from strong condemnation to quite open acceptance. Indeed, it was also purported to be one of the cultural facts of certain provinces. 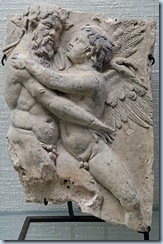 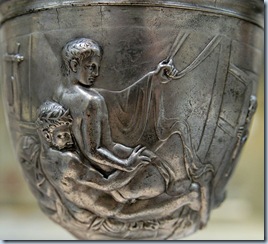 In discussing such attitudes, it is fundamental to recall that the term homosexuality is entirely problematic for the ancient world since there is no single word in either Latin or ancient Greek with the same meaning as the modern concept of homosexuality. Although it again and again becomes apparent that bisexuality was more common, even the ancient authors agree that there were ancient Roman men who had sexual relations exclusively with men.
In the early Roman Republic, pederasty with freeborn boys was considered a degenerate Greek practice and as such was generally condemned. 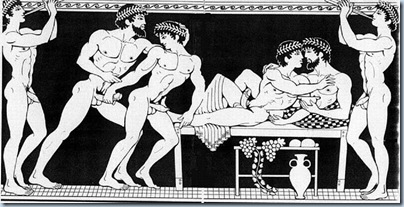 Pederasty largely lost its status as a ritual part of education — a process already begun by the increasingly sophisticated and cosmopolitan Greeks — and was instead seen as an activity primarily driven by one's sexual desires and competing with desire for women. The social acceptance of pederastic relations waxed and waned during the centuries. Conservative thinkers condemned it — along with other forms of indulgence. Tacitus attacks the Greek customs of "gymnasia et otia et turpes amores" (palaestrae, idleness, and shameful loves).

Other writers spent no effort censuring pederasty per se, but praised or blamed its various aspects. Martial appears to have favored it, going as far as to essentialize not the sexual use of the catamite but his nature as a boy: upon being discovered by his wife "inside a boy" and offered the "same thing" by her, he retorts with a list of mythological personages who, despite being married, took young male lovers, and concludes by rejecting her offer since "a woman merely has two vaginas." Among the Romans, pederasty reached its zenith during the time of hellenophile emperor Hadrian. Commodus had a number of male lovers. Elagabalus also had numerous male lovers and even married one of these in a public ceremony. Philip the Arabian was also known for his fondness for young men.
While it was common in Greece and Rome that the younger partner was passive and the older active, there is (especially from the Roman period) evidence that older men preferred the passive role. Martial describes, for example, the case of an older man who played the passive role and let a younger slave occupy the active role. Often it was also assumed that only the active participant gained pleasure from sexual intercourse. In general, the passive role was equated with the role of a woman and therefore felt to be rather low. Suetonius reported that the Emperor Nero, in taking the passive sexual role with the freedmen Doryphorus, imitated the screams and whimpering of a young woman. Men taking the passive role were often liable to be accused to take too much care of their appearance to attract and please potential active partners. Such men were usually shown in a negative light, having the word kinaidos / cinaedus applied to them (which could also be applied to eunuchs).

There are also other examples. Again Suetonius reported that Emperor Galba felt drawn to strong and experienced men. More than once it is reported that soldiers were sexually assaulted by their higher officers. 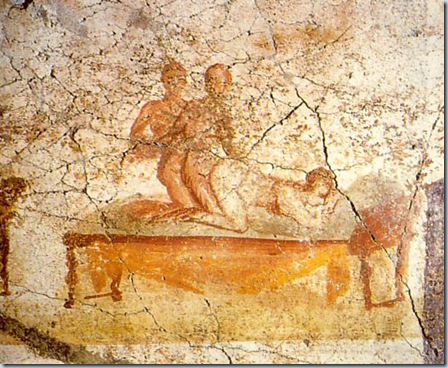 In addition to repeatedly described anal intercourse, there is also plenty of evidence that oral sex was common. A graffito from Pompeii is unambiguous: "Secundus is a fellator of rare ability." ("Secundus felator rarus") In contrast to ancient Greece, a large penis was a major element in attractiveness. In Petronius is a description of how a man with such a large penis in a public bathroom looked up, excited. Several emperors are reported in a negative light for surrounding themselves with men with large sexual organs.
There are at least some signs that something approaching a homosexual subculture was already starting to develop in ancient Rome, although it certainly does not compare with modern subcultures. In Rome around 200 BC there was already a road where male prostitutes preferred staying, specialising in either the passive or active role. Other men searched for sailors in the vicinity of districts close to the Tiber. Public baths are also referred to as a place to find sexual partners. Juvenal states that such men scratched their heads with a finger to identify themselves. 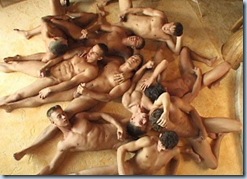 Lesbianism
By the first century AD, there is a larger scope of sources on the possibility of female homosexuality. Ovid denied the possibility that such a thing ever existed. Later comments, however, are extremely hostile, and even go as far as the killing of a woman by her husband. Martial himself, who shows himself to be amused by all other kinds of 'deviation', has a very negative opinion of lesbian love. In Egypt, however, some love spells in Greek have been found, which were clearly written by a woman with the purpose of winning the heart of another woman, and so lesbianism clearly occurred elsewhere in the Empire outside of Rome itself, and was not always seen in such a negative light.

The earliest formal record of legislation is Lex Scantinia, enacted in either 225 or 149 BC which regulated sexual behavior, including pederasty, adultery and passivity, and legislated the death penalty for same-sex behavior among free-born men, and there is evidence of punishments in earlier times. Above all, pederasty was condemned in the Republican era and dismissed as a sign of an effeminate Greek lifestyle. 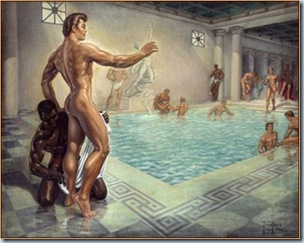 In the mid Republic homosexual acts were widely accepted, if the active partner was a Roman, and the passive partner a slave or non-Roman. Deviations from this pattern were morally condemned, but apparently had few legal consequences. Martial and Plautus describe a wide range of homosexual behaviors, in part to poke fun at them like other minor standard deviations, but without too much moralizing. On the other hand, there is also from the year 108 an indictment against C. Vibius Maximus, a Roman officer in Egypt who had a sexual relationship with a young nobleman.
Juvenal condemned many forms of male homosexuality, and especially laments Roman men of high birth who show a moral front but secretly took the passive role. He found men who openly played the passive role pitiful but at least honest, and praised true love found by a man for a boy. Public speeches usually condemned all forms of homosexuality. When Julius Caesar was ambassador to Nicomedes IV of Bithynia, he was rumoured to have had a relationship with the king and played the passive role but, though this damaged his reputation, it apparently had no legal consequences. The emperor Hadrian had a relationship with the younger Antinous, although this was also criticized but not significant enough to prevent him plunging the empire into mourning following Antinous' apparent death by drowning in 130. 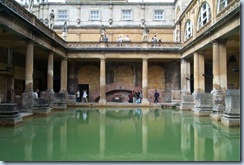 According to some, the circumstances surrounding the massacre of Thessaloniki in 390 suggest that even in the late 4th century homosexuality was still accepted in large parts of the population, while officially prosecuted. When a popular charioteer was arrested for having sexually harassed an army-commander or servant of the emperor, the people of the town were calling for his release, though this is more likely due to his popularity than to the nature of the allegation.

So here begins our journey through homosexuality and the Roman Empire. I hope you will enjoy it.

Ohh, here goes that Gladiator fantasy again. Durn your hide. I'm thinking a sheath and sword thing - in an anatomical way of course....he he

Oh, and did I mention baby oil?!?! Something to do with a Roman-Grecco thing?

Aren't I a stinker?

Love the info and history, am adding you to my blogroll...

LOL, Crotchdiver, and just for you I will have a post up soon about the sensuality of gladiators and other ancient athletes. Not particularly gay, but they turned on a lot of people.

Thanks, Tom. I'm glad you liked my blog and I hope you continue to come back. Also, thanks for the mention on your blog. I feel so honored.