In simple terms, the "Doctrine of Signatures" is the idea that God has marked everything He created with a sign (signature).  This doctrine states that herbs that resemble various parts of the body can be used to treat ailments of that part of the body. 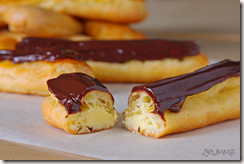 The consumption of certain foods can invoke a powerful response to our libidos, just because of the various body parts they resemble. My favorite is probably a crème filled éclair.  How can you go wrong with such a phallic symbol as that?  It’s long and thick, and cream bursts from it when you bite it just the right way.  Yum, Yum… 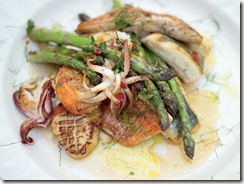 Éclairs are by far not the only sensual food.  Think of asparagus, long stalks that are still crispy enough to stand when cooked correctly.  Or what about carrots or any number of root vegetables. What about small potatoes that look like perfectly formed testicles.  Or you can go right for a more literal interpretation.  Mountain oysters and bull and sheep testicles have long been eaten for their testosterone laden potency.

There is an old story about the guy who went to a bull fight.  Afterward, he sits down at a nearby restaurant to eat dinner.  With much fanfare, the guy at 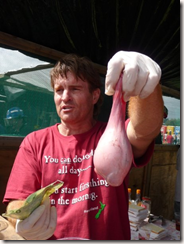 the table next to him is served this beautiful dish with two luscious lumps of meat, and he relishes it as he eats it.  The guy asks his waiter, what is that lovely meal that guy is having, and why is he enjoying it so much.  The waiter replies that it is the testicles of the bull that was slain in the arena that day.  They supposedly supply the eater with the potency of a bull, and therefore, he can fuck all night. So the guy asks, how can I get that dish.  He says you must be the first to order it before the bullfight, then when you arrive after the bullfight it will be served to you.  Right there the guys says, well put me down for tomorrows dish, I want to see how potent these bulls testicles are.  So he goes to the bullfight, but he is so excited about his meal that he leaves early.  he has a few glasses of wine waiting for his meal to be prepared and arrive.  Finally, the waiter tells him that it is ready.  And with much fanfare, he is brought out a rather sad looking dish.  On a bed of lettuce are two rather small pieces of meat. The guy looks at his waiter and says, wait a minute, why the hell are these so small, they look nothing like the dish from last night.  The waiter replies, “Sometimes, the bull wins.” 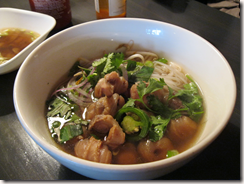 In Asia, they actually go beyond the eating of the testicles of animals, but a particular delicacy that is meant to enhance the potency of a man, is an animals penis.  The meaty cartilage around the penis bone (unlike humans, most animals actually do have a bone in their penis) is a sensuous meal served mainly to men to enhance their sexual prowess.  Eating testicles and penises are taking the  "Doctrine of Signatures" to a whole new level. 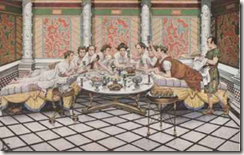 All of these foods can be used in the most sensual and exciting way, especially if your love of food and man can be mixed.  I say have a Ancient Roman banquet.  If you have a low table, some pillows on the floor for reclining, spread out a a feast of sensual foods that resemble the penis, the testicles, and maybe even through in some fruit like peaches that resemble a perfect ass. Then you and your partner can feed each other, make sure that you only use your hands to eat with so that it is far more of a sensual experience.

So since my friend Crothdiver over at Anything Male challenged me to a post about aphrodisiacs and the sensuality of food, here is my challenge to him:

You have mentioned several times how much you like to cook….Well, can you plan a menu (recipes included) that would be your ideal of a sensual banquet?  What is the most romantic and sexually laced meal that you can come up with?

Joe, you need to add another check-off box: disgusting!

By the way, my word verification is "spkible" to which I will add (de)spkible!

Geez....ah,ah - well, no let me think about this - and yeah I'm up to the challeange...Hmmm Gosh. Where do I begin?!? Hmm. Do I have a budget I need to work with or just go for it? I'm thinking about a meal laid across several courses. And Spinach Salad w/ Hot Bacon Dressing is right up there. OK, OK - I'm on it. Give a day or so.

Eh -question?!? Do I have to pair wine with each course - because I really suck at pairing wines. {I'm not a big wine drinker.}

Uncut?!? Mountain oysters are good. I've had them twice. No different than eating gizzards - another southern delicacy. I had to overcome obsticles and hurdles where it concerns my palate - so I appreciate what you stated.

@Uncutplus-I am not too big on eating organs either, though I do like fried chicken livers and gizzards, LOL. I first saw the story about the penis soup when NBC was covering the Olympics in China. I find it disgusting too. Besides, there are too many disgusting foods that people use for aphrodisiacs. At least this isn't a women's history blog, because if you really want to be disgusted then check out ancient birth control methods.

@Crotchdiver-I'll send you an email more about my challenge. But mainly, what is the most sensual meal you could plan?

I'm on it. Ain't no birth control issue here. Had that taken care right after the third child. Three was my limit as a parent and to my mental health. LOL