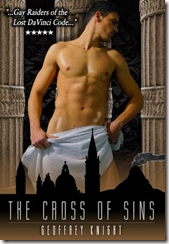 I began to think about my knowledge of homosexuality in Ancient Egypt and about what I knew about Egyptian eunuchs. The result was: not much about homosexuality and only a little about eunuchs in Egypt. Despite Ancient Egypt being a pre-Christian culture and one of the world’s oldest civilizations, there is very little mention of sex, sexuality, or homosexuality. Why is that? Well, I began to think and do a little research. I remembered that I had read that not only were the Ancient Egyptians prudish, but also the Egyptologists who have written their history were prudish. I read a great deal, so it took me a little bit to remember where I had read this. Then I remembered that it was in Geoffrey Knights book, The Riddle of the Sands

. Geoff has written two wonderfully fun books in his Fathom’s Five Series. If you were a fan of Indiana Jones, then these are the books for you. Think of five hot adventurers and treasure hunters who are all gay, then you have Fathom’s 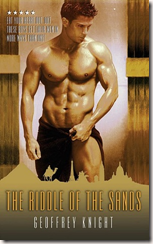 Five. I think it is best to read the books in order. The first one, The Cross of Sin

, was just recently re-released as an e-book with missing chapters, deleted scenes, secret files, and a new short story “The Amazing Adventures of Elsa Strauss: The Dame of Notre Dame”, and over 70 pages of bonus material. I love reading adventure/historical books such as by Dan Brown, Steve Berry, Paul Christopher, and my personal favorite Will Adams, but all of these have one thing in common, they are written for a heterosexual audience and are not really gay oriented (though Will Adams is more so). This is why I love Geoffrey Knight’s books, all of the characters are gay and that just makes it more fun. You can get the re-released version of The Cross of Sin

by clicking on the link, or you can get the original version through Amazon.com. Here are the links for those: The Cross of Sin

and The Riddle of the Sands : Jensen Rivers wasn’t looking for trouble. As the new kid on the block at Clyde’s Body Shop, all Jensen wanted was a job, a place where he could put his head down and ass up. Young and handsome, he was the kind of simple, honest guy who was happiest when he was working hard, with oil smeared across his chest and grease up to his elbows.
But Dean ‘Hutch’ Hutchinson plans on getting more than just Jensen’s hands dirty! Reckless and arrogant, drenched in sweat and dripping with a masculinity that cannot be tamed, Hutch challenges Jensen to a series of perilous night races. The prize: sexual domination! Night after night, wheels burn, passions flare and the no-holds-barred lust between two testosterone fuelled daredevils ignites. But losing a race is one thing. Losing your heart is something altogether more dangerous. Will Jensen risk everything to find the love trapped behind Hutch’s fearless façade? Will Hutch bury the secret tragedy of his past before he throws away his last chance at a future? Kickstart your need for speed, fire up your lust for life and buckle up for hottest thrill-ride of the year—Drive Shaft. (I couldn’t find a picture of the book cover to post, so I used a picture from my vast collection instead). 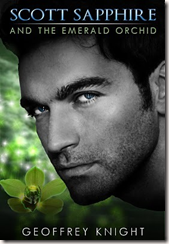 Scott Sapphire and the Emerald Orchid: Meet Scott Sapphire—lover of French champagne, Belgian chocolate and dangerous men. He is suave. He is sexy. He is a man of the world—and a man that the world desperately wants to catch. For Scott Sapphire is the greatest jewel thief of our time. Dashing. Daring. And always neck-deep in trouble. When Scott’s latest heist lands him in possession of a map to a rare and precious orchid, it’ll take more than bedroom eyes and a charming smile to stay one step ahead of the world’s deadliest drug baron, as well as keep the CIA off Scott’s back and a handsome special agent out of his pants—or maybe not. From New York City to the Amazon jungle, from Rio de Janeiro to the French Riviera—and from the writer of the world’s Number #1 gay adventure series, Fathom’s Five—comes a brand new hero as irresistible as diamonds and pearls. Adventure has a new name! And that name is Scott Sapphire.
The third book in the works is the next in the Fathom’s Five Series. I can’t wait.


This was originally supposed to be a post about Homosexuality in Ancient Egypt, but I have gotten a little carried away talking about Geoff’s books. I hope that Geoff won’t mind. So since this one is sort of long, I’ve decided to do a part two about Homosexuality in Ancient Egypt. Stay tuned.
This post about books is a recommendation, not an advertisement.
The next post will be another Author Spotlight, then the hopefully the post I have been working on about eunuchs in Pharonic Egypt.
Posted by Joe at 9:16 AM

I don't know about anyone else who might be reading this, but I know the writings of the professor is heating things up in here

Thanks Denis, I hope you will check out these books. I think you might like them. They are hot and a lot of fun to read.

That pic you chose for Drive Shaft is great. I'd love to plug in to his drive shaft. You've got a knack for portraying the right pic for the right situation. Michael Anthony Downs has some beautiful male models he's photographed.
Thanx Joe.

BTW in the review for Scott Sapphire and the Emerald Orchid, you mentioned my last name.

Thanks Denis. I try to choose the right pictures for the right occasion.

So is your last name trouble or sexy, LOL. I'm just kidding with you but you have a good mystery for me to figure out. LOL