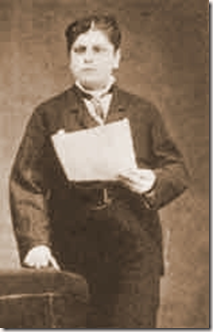 Today, anyone curious about the castrati’s unique voices can listen to a recording made in 1902 by the very last of the breed, Alessandro Moreschi (1858-1922). Even though the operation was banned in early 19th century, Italian doctors continued to create castrati until 1870 for the Sistine Chapel, and Moreschi went under the knife at the age of seven. Although he was not on a par with demigods like Faranelli, Moreschi’s voice, said an Austrian musicologist who heard him perform live, “can only be compared to the clarity and purity of crystal.” Although Moreschi kept performing for the pope until 1913, his fame was assured eleven years earlier, when the American recording pioneer Fred Gaisberg had a few days free in Rome and paid a call on the Vatican Palace. Instead of a studio, Gaisberg set up his unwieldy and primitive gramophone apparatus in a salon surrounded by Raphaels and Titians. The 44-year-old Moreschi had only one chance to record and made a few nervous mistakes. “He is surprising, but never exquisite,” opines the author and critic Angus Heriot, while one modern British curator dismisses him as “Pavarotti on helium.” Still, his voice provides a unique slice of the past. In order to recreate the sound for the film Farinelli, Il Castrato, The Institute for Musical and Acoustic Research in Paris blended electronically the voices of a male countertenor and a female coloratura soprano; the combination emulates the dazzling range of the top castrati, whose voices could trill across three octaves. •

They are becoming popular as a subject for novels; try the following:


Amis, Sir Kingsley: (Cape, 1976) "The Alteration"; a very clever portrayal of the future, assuming there had been no Reformation; so castrati were still acceptable in the Catholic country of England!! Multi-layered and faceted, it uses a little of Heriot's book as a basis, so he told me; and that the book was meant for me, too.
Fernandez, Dominique: "Porporino": (Grasset, 1974), in French and Italian; there IS an English version available; long out of print, but copies can (sometimes) be obtained via amazon; this book won the Prix Medicis and is a fictional account of the lives of two castrati; they met everybody who was anybody in the musical world of the latter part of the eighteenth century; the novel has a Gothic subplot. This author taught Patrick Barbier.
Rice. Anne: "Cry to Heaven" (Knopff, NY, 1982), reprinted in England; basically accurate; lavish and lush and heavily (homo)sexual; the basic premise is doubtful, that a castrato could be "made" at around 14 years of age; however, a good "blockbuster read" by the Queen of Vampire novelists !