Wilbur Addison Smith (born January 9, 1933 in Broken Hill, Northern Rhodesia, now Kabwe, Zambia) is a best-selling novelist currently residing in London. Smith is probably the most famous author to write about an Egyptian eunuch, the main character in his four Egyptian novels.  Set in the land of the ancient Pharaohs, this quartet vividly describes ancient Egypt and has a cast of unforgettable characters, especially Taita – a wise and formidably gifted eunuch slave.

tells the story of the talented eunuch slave Taita, his life in Egypt, the flight of Taita along with the Eygptian populace from the Hyksos invasion, and their eventual return. The novel can be grouped together with Wilbur Smith's other books on Ancient Egypt. It was first published in 1994.  This historical novel centers around the little-known facts behind the Hyksos invasion of Egypt, circa 1780 B.C. Containing all the standard elements of great adventure--intrigue, romance, greed, cruelty and furious action--the yarn is spun by the clever eunuch Taita, who reports on events with an irony akin to a 20th-century sensibility. Taita is the slave of Egypt's scheming Grand Vizier Lord Intef, whose daughter Lostris is in love with Tanus, a young army officer whose father's demise was brought about by Intef's greed. Knowing of his daughter's love, Intef devises a plan for her to become the bride of Pharaoh Mamose. These maneuvers set the stage for the story of two warring Nile kingdoms, the arrival of the Hyksos and the ultimate exodus of the Egyptian court, now ruled by Queen Lostris. Taita is a curious creation. He is clever and wise, but we don't know how he became so learned or what his country of origin is. The brilliant slave invented a system for calculating the rise and ebb of the Nile, is extremely knowledgeable in the ways of healing, improves upon the wheel and trains horses (both of which were brought to Egypt by the invading Hyksos). He is also clever enough to manipulate the Pharaoh into believing that he is the father of Prince Regent Memnon, the offspring of a forbidden tryst between Lostris and Tanus. Somehow, this doesn't ring true.

, first published in 1995, is the second of the 'Egyptian' series of novels by Smith and follows the exploits of the adventurer Nicholas Quenton-Harper and Dr. Royan Al Simma. The tomb of Tanus which is the focus of the book refers to another novel by the author, River God.  It is set in modern times.  A search for the 4000-year-old tomb of an Egyptian pharaoh along the Nile's headwaters in Ethiopia is the focus of this intoxicating sequel to River God. A heady mix of exotic adventure, romance and Egyptology, it pairs blueblood, devil-may-care Sir Nicholas Quenton-Harper, who recently has lost his wife and children in a tragic accident, and half-English, half-Egyptian archeologist Royan Al-Sima, herself recently bereaved, in a desperate race to unearth Pharaoh Mamose's fabulous treasures. Their rival in this quest is Gotthold von Schiller, an old, crazed, murderous German collector of antiquities whose mistress, a porno actress, dresses up as an ancient Egyptian queen to titillate him. The major clue is the eponymous seventh scroll, key to the tomb's location, written by ancient Egyptian scribe and eunuch Taita, who figured prominently in River God. As the novel opens, thugs hired by von Schiller steal the scroll, and thereafter the rival archeologist teams play a cat-and-mouse game with Taita across the millennia, avoiding lethal traps and deciphering red herrings, which will fool the reader too. The colorful cast includes alcoholic ex-KGB operative Boris Brusilov and ruthless Texan Jake Helm, von Schiller's slavish sidekick. Fans of intricate adventure and Egyptian lore will be captivated by Smith's capacious saga, which should serve to increase his audience in the States. This prolific and popular British writer-with 24 previous novels, he is a bestseller in England and elsewhere, to the tune of 65 million copies-is a master of the genre.

, first published in 2001, is the third installment of this series of novels by Smith set to ancient Egypt and follows the fate of the Egyptian Kingdom through the eyes of Taita, the multi-talented and highly skilled eunuch slave of the previous two novels.  Lengthy but seamlessly composed tracks a power struggle in ancient Egypt between false pharaohs and a true royal heir, evoking the cruel glories and terrible torments of the era. The kingdoms of Upper and Lower Egypt have been at war for 60 years. Upper Egypt is ruled by Tamose, Lower Egypt by Apepi, king of the Hyksos. Treachery and assassination eliminate both rulers, allowing two false pharaohs to unite in an orgy of tyranny and oppression. Tamose's son, Prince Nefer, is his father's rightful heir, but the false pharaoh, Lord Naja, denies Nefer's birthright and plots to kill the young prince. Aided by the royal sorcerer, a warlock named Taita, Nefer escapes Naja's plots. Nefer and Taita outwit assassins, evil magicians, pursuing armies and even the treachery of Nefer's own sister, as they raise their own army in the lost desert city of Gallala. Taita's magic spells and occult powers protect, teach and guide Nefer on his tortuous path to regain the throne and save the woman he loves, Princess Mintaka, daughter of slain King Apepi. However, as Nefer's strength grows, so does that of his enemies, and it will take all of Nefer's courage and Taita's mystical powers to prevail when the chariot armies of evil sweep across the desert wasteland to the gates of Gallala. This is a very bloody and violent yarn, set in an age when merciless combat, torture, rape and sacrifice were common. Though timorous readers may wish to steer clear, those willing to brave the blood and gore will be carried away by the sweep and pace of Smith's tale.

, first published in 2007, is the fourth and last of the Egyptian novels.  If you read the first three novels in Smith's ancient Egyptian series and enjoyed them as much as I did, you will welcome the fourth book in the saga, which picks up where Warlock (2001) left off. The powerful magus Taita and his loyal ally, Col. Meren Cambyses, have returned to Egypt after a journey of many years only to find the country beset by a series of plagues that include giant flesh-eating toads and river water turned to blood. Pharaoh Nefer Seti asks the pair to find—and eliminate—the source of his country's torment, a mission that sends Taita and Meren on a perilous quest in which they must contend with fierce creatures both natural and supernatural. Once again Smith deftly blends history, fantasy and mythology, but newcomers should be prepared for grisly deaths and mutilations. 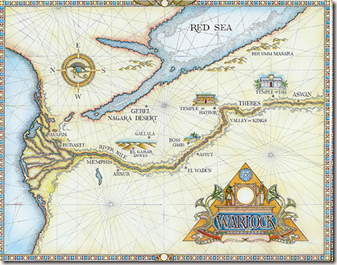 I am planning for author spotlights to be a regular feature of this blog.  If any of you out there are avid readers and would like to make some suggestions, please feel free.  I will also be more than happy to accept contributions from my readers of reviews of books that might be of interest to the readers of The Closet Professor.

A very good synopsis of Wilbur Smiths' novels and of Jason Goodwins too. It would be nice if the PBS network could bring some of these books to life on the Masterpiece Theatre screen. Only a thought.

These books would be wonderful additions to Masterpiece Theater.

I recently hear that one of my favorite books series is supposed to be produced for Masterpiece Theater, Donna Leon's Commissario Guido Brunetti Mysteries, which have already been made into movies in Germany, but apparently the BBC is going to adapt them as well. I am very excited about that.