Jason Goodwin (born 1964) is a British writer and historian. He studied Byzantine history at Cambridge University. Following the success of A Time For Tea: Travels in China and India in Search of Tea

, he walked from Poland to Istanbul, Turkey. His account of the journey, On Foot to the Golden Horn

, won the John Llewellyn Rhys/Mail on Sunday Prize in 1993. 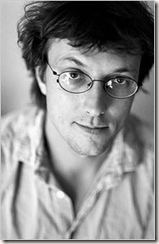 Subsequently he wrote Lords of the Horizons: A History of the Ottoman Empire

. Later, he became popular as the author of the mysteries The Janissary Tree

and The Snake Stone

, two books which pivot on a Turkish eunuch detective, Yashim, who lives and works in 19th century Istanbul. The Janissary Tree won the coveted Edgar Award for Best Novel in 2007 and will be available in 38 languages. The third Yashim novel, The Bellini Card

, was released in the summer of 2008. A fourth novel is set to be published in April 2011 called An Evil Eye

(Yashim the Eunuch). The books are a fascinating read. Yashim the eunuch was castrated as a boy by an enemy of his father’s, so he did what anyone during this 1800s in Istanbul who had lost their testicles—he became a eunuch. These books are most certainly not gay books, though they are far from homophobic, it just isn’t part of the stories. As a member of the royal household, Yashim is the detective the Sultan turns to when he needs a mystery solved. Yashim uses his many contact, including his friend the Polish ambassador, Stanislaw Palewski (both feel a kindred spirit because Poland was no longer a country, and thus as Palewski says, he is a man without a country—not fully a man at all, and Yashim is a man without balls—not fully a man either.
The Janissary Tree: A Novel 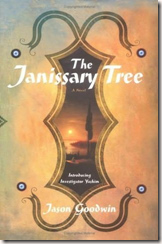 In 1836, though the corrupt elite troops known as the Janissaries were crushed 10 years earlier, there are ominous signs that their influence still persists in the twisted alleys and secret places of Istanbul. A series of crimes, including the barbaric murders of several soldiers and the theft of some precious jewels, leads eunuch Yashim Togalu to delve into the past in an effort to separate legend from truth. With special access to all areas of the sultan's royal court, Yashim uses his network of contacts to try to solve the crimes.

The Snake Stone: A Novel 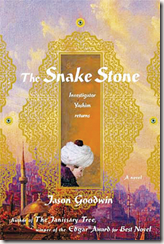 When French archeologist Maximilien Lefèvre begins asking very pointed, well-informed questions about long-lost Greek artifacts and then is found dead outside the French embassy, series hero Yashim, a Turkish eunuch, finds himself suspected of the murder. His efforts to clear his name take him from markets and wharves to palaces and underground tunnels as he uncovers a secret society, unearths sacred relics and hunts the murderer. Goodwin's secondary characters, particularly Yashim's close friend Stanislaw Palewski, the world-weary Polish ambassador, are distinct and memorable, and the mystery presents an entertaining challenge to the reader as well as to charming, determined Yashim.
The Bellini Card: A Novel 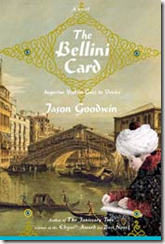 Near the start of Edgar-winner Goodwin's fine third historical to feature the eunuch Yashim, who serves the Ottoman rulers of early 19th-century Turkey (after 2008's The Snake Stone), Yashim's close friend Stanislaw Palewski, the Polish ambassador to the Turkish sultan, accepts an undercover assignment on the sultan's behalf. Posing as an American, the diplomat travels to Venice in an effort to locate a portrait of Mehmet the Conqueror (who reclaimed Constantinople from the Christians in 1453), painted by the legendary artist Gentile Bellini. Fortunately for Palewski, Yashim, who has a secret plan for the painting's recovery, intervenes in time to set the mission on the right track after the murder of two art dealers. While Yashim initially plays a backstage role, the eunuch and a shadowy power broker engage in an exciting and complex duel of wits in the book's final quarter.

I believe this could be some interesting reading. And a twist indeed. The author has the same surname as my mothers maiden name
and he actually walked from Poland? My fathers home country of which his home is now in Ukraine because of border changes after WWII. I'll have to research this gent from Britain. Thanks.

Denis, I really enjoyed his books. The characters are fun, you learn a lot about the Ottoman Empire and eunuchs, and it has a pretty good mystery. I enjoyed them. And thanks for the genealogy, I always find it interesting where people's families are from.