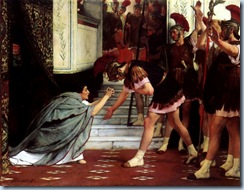 Tiberius Claudius Drusus Nero Germanicus, commonly known as Claudius, was the fourth emperor of Rome, following Augustus, Tiberius and the infamous Caligula. Because he stammered and had a clubfoot, Claudius was lightly regarded until he was made emperor after Caligula's murder in the year 41. (According to legend, members of the Praetorian Guard installed Claudius on the throne after finding him cowering behind a palace curtain.) It is not known for sure what physical calamity Claudius had, only what his symptoms were. His head was too large, so it slumped over to one side. When he was excited or angry, he began to stammer and to drool. He also had a lame leg, so he walked with a limp dragging one foot behind him. Remarkably, history tells us that his condition dramatically improved once he became emperor. Some historians have speculated that he overemphasized his illnesses so that he would not be noticed and therefore not a threat to those who wanted power. Claudius may have been the most just and intelligent of the first five emperors. His family, however, felt otherwise:

His mother Antonia often called him "a monster of a man, not finished but merely begun by Dame Nature"; and if she accused anyone of dulness, she used to say that he was "a bigger fool than her son Claudius." His grandmother Augusta always treated him with the utmost contempt, very rarely speaking to him; and when she admonished him, she did so in short, harsh letters, or through messengers. When his sister Livilla heard that he would one day be emperor, she openly and loudly prayed that the Roman people might be spared so cruel and undeserved a fortune. (From Suetonius The Lives of the Twelve Caesars) 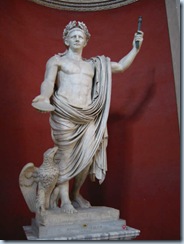 Despite his reputation as a feeble man, Claudius proved to be a sturdy emperor; he is particularly remembered for conquering and colonizing Britain, and for improving the civil administration of Rome. Claudius died in 54 A.D. under mysterious circumstances; many historians believe he was poisoned by his wife, Agrippina, so that her son Nero would become emperor. Claudius was apparently the only fully heterosexual of the first five emperors. No rumors survive of any dalliances with men. His weakness was women. He loved them and tried to give them everything and anything they wanted. He even gave his life to his last wife Agrippina, when she murdered him so that her son, Nero, could rise to the rank of emperor.

Claudius gained new fame when historian Robert Graves published his landmark historical novel I, Claudius in 1934. The book was made into a popular BBC miniseries of the 1970s, with actor Derek Jacobi playing Claudius. Claudius was the nephew of Tiberius and the brother of the soldier Germanicus.

There isn’t really anything sexy about Claudius. However, I can never discuss the first five emperors without including him. He often gets overlooked because of his physical ailments, but in truth he was considered one of the “mad” emperors because of his disabilities. From most accounts he was overall a good man who was more intelligent than others assumed.