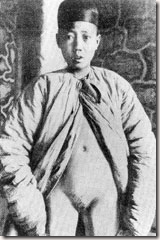 In China, male castration of a person who entered the caste of eunuchs during imperial times involved the removal of the whole genitalia, that is, the removal of the testes, penis, and scrotum. The removed organs were returned to the eunuch to be interred with him when he died so that, upon rebirth, he could become a whole man again. The penis, testicles and scrotum were euphemistically termed bǎo (寶) in Mandarin Chinese, which literally means 'precious treasure'. These were preserved in alcohol and kept in a pottery jar by the eunuch. In China the practice of using castrated men as guardians of the emperor’s Inner court began over 2,000 years ago. Aside from the emperor, eunuchs were generally the only men allowed in the inner courtyards of the palace, where the women and harem lived.
Famous Chinese Eunuchs 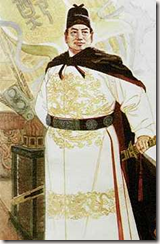 Cheng Ho, or Zheng He, was born in Kunyang, Yunnan province, China, in 1371. He was captured and sent to the Chinese army in 1382 where he helped Chu Ti become Emperor Yonglo of the Ming Dynasty. In thanks, he was made Grand Imperial Eunuch and his name was changed to Zheng He. He headed a series of naval expeditions all over the Indian Ocean. Zheng had diplomatic, scientific, and commercial goals, while travelling farther than any other admiral in history at the time. He visited more than 35 countries during his voyages. Zheng took more than 100 ships and about 28,000 men in his Grand Fleet. The largest vessels were longer than all of Columbus’ ships put end to end. By the seventh and last voyage, Zheng had been to east Africa, the Persian Gulf, Egypt, and Ceylon. He set up diplomatic relations in all the countries he visited and received tribute. When in Ceylon, Zheng helped restore the legitimate ruler to the throne. In Indonesia, the fleet defeated a powerful Chinese pirate who was later brought back to China for execution. Zheng’s voyages not only established Chinese trade routes throughout Asia and Africa, but also established China as the dominant power and most technologically advanced culture in the known world. He died during a trip home from India and China banned all further expeditions. 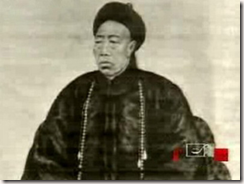 Li Lianyang accumulated vast influence as the, favorite eunuch of the Empress Dowager Cixi, who climbed from a concubine third-grade to become ruler of China for 40 years in the.19th century. Li headed an Imperial staff of thousands of cooks, gardeners, laundrymen, cleaners, painters and other eunuchs, who were classified in a complex hierarchy of 48 separate grades. Though eunuchs were generally illiterate, Li Lianyang, could read enough to wield influence over officials.

Sun Yaoting was China’s last imperial eunuch died at 93 in 1996 in a Beijing temple after a life spanning the end of an dynasty and a Communist revolution. Only months after his family had him castrated in1911, the Manchu Dynasty, which had ruled China since the early 1660s was overthrown. Mr. Sun continued to serve Pu-Yi, for a decade. The parts removed, called the ‘precious,’ are prepared and kept in common pint jars, hermetically sealed, and placed on a high shelf. Should a eunuch be promoted he has to show the ‘precious’ to the chief eunuch or he cannot obtain his rank. When he dies, they are placed in the coffin and buried with him, because he wishes to be as complete as possible when departing into another world to allow reincarnation as a whole man. During the Cultural Revolution, Mr. Sun’s family destroyed his ‘precious’.