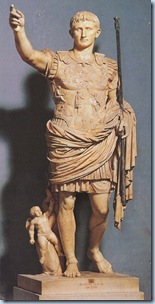 Some historians consider him the greatest ruler of Rome, but Caesar Augustus was a conundrum: a ruthless politician and soldier who used his power to restore order and prosperity to Rome with such success that his reign (27 B.C. to 14 A.D.) became known as the Augustan Age. Born Gaius Octavius, he was named as the adopted heir of his great uncle Julius Caesar in Caesar's will. (At this point Octavius changed his name to Julius Caesar Octavianus; in his own era he was called Caesar, though in modern accounts he is usually called Octavian for clarity.) After the murder of Caesar in 44 B.C., Octavian formed an uneasy alliance with Julius Caesar's fellow soldier Marc Antony (one of the few (if not only) historical figures that ancient historians discussed his penis size [apparently, he was very well-hung]) and the general Marcus Lepidus, an alliance known as the Second Triumvirate. The three spent several years conquering their common 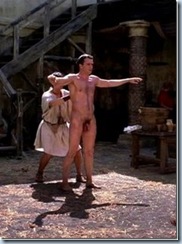 enemies, but Octavian and Antony finally turned on one another after Antony formed a political (and romantic) alliance with the Egyptian queen Cleopatra. Octavian defeated the combined forces of Antony and Cleopatra in the naval battle of Actium (31 B.C.) and became the absolute power in Rome. In 27 B.C. the Roman Senate added to his adopted name of Caesar the title Augustus (meaning "divine" or "majestic"). As emperor he expanded the borders of Rome and took a particular interest in civic and cultural affairs, building temples and theaters, improving aqueducts and supporting poets and historians like Virgil and Ovid. He founded the Praetorian Guard, stationing some cohorts in towns throughout Italy and some in Rome itself, as a sort of urban police force. His aims were to establish a lasting peace after a century of civil wars, to build a political system which would secure stability for the empire, to restructure the government of the provinces in a way that would tie them more closely to Rome and enable them to share more fully in the Roman prosperity and order, to build up the Roman upper classes, and to restore the old Roman religion and morality. Hence much of his legislation dealt with moral and social reforms, especially those designed to strengthen marriage and encourage children among the upper classes and to discourage adultery, extravagance, and luxury of all kinds. Historians usually date the commencement of the Roman Empire from this year, though some term the system Augustus founded the Principate. Augustus died in 14 A.D. and was replaced by his stepson Tiberius, the son of Augustus's second wife Livia.
Suetonius describes a strained relationship between Augustus and his daughter Julia. Augustus had originally wanted Julia, his only child, to provide for 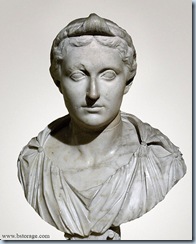 him a male heir. Due to difficulties regarding an heir, and Julia's promiscuity, Augustus banished Julia to the island of Pandateria and considered having her executed. Suetonius quotes Augustus as repeatedly cursing his enemies by saying that they should have "a wife and children like mine." His daughter Julia is actually the most fascinating of figures during the Age of Augustus. Many of her friends asked her how she could get away with having sex with so many men, and yet all of her children looked like her husband. To which she stated (and this is one of my favorite lines in history), “I never take on new passengers, unless the cargo hold is full.” (That is not an exact quote, but it is close enough.) In other words, she never took a new lover until she was pregnant by her husband. She had at least six children, but we don’t know how many times she was pregnant.
According to Suetonius, Augustus lived a modest life, with few luxuries. Augustus lived in an ordinary Roman house, ate ordinary Roman meals, and slept in an ordinary Roman bed. In The Life of Augustus, Suetonius stated: The city, which was not built in a manner suitable to the grandeur of the empire, and was liable to inundations of the Tiber, as well as to fires, was so much improved under his administrations, that he boasted, not without reason, that he “found it of brick, but left if of marble.”
BTW, if you have not seen the HBO series ROME, I highly recommend it. It is a fantastic series (only two seasons) that begins with Julius Caesar and ends with Augustus. Wine, women, song, and naked slaves with jeweled cocks. According to the series Rome (don’t know if this is historical in the least, Suetonius didn’t mention it), Augustus enjoyed abusing his wife for sexual pleasure, including whipping her before having sex.

One of my many favorite scenes from the series “Rome - Octavian visits a brothel”:
I would have chosen the one “right off the boat,” LOL.
The posts will get better as the day goes on. I just wanted to start with Augustus, mainly because I think Julia was great. However, Augustus was mostly just boring and Julia had heterosexual sex, which I didn’t care to include pictures of.