This picture was taken by me several years ago when I was in France. As we sat to have a picnic lunch, with all the food bought fresh from the local farmer's market, we had this beautiful view of the medieval bridge in the picture. The bridge is located in town of Amboise.

Amboise is a town in north central France, in Touraine, on the Loire River (the river in the picture). It is a wine and wool market, and its manufactures include sporting goods, pharmaceuticals, and film and radio equipment. The town is chiefly famous, however, for its Gothic château, a royal residence from the reign of Charles VIII (who was born and died there) to that of Francis II. Leonardo da Vinci, who probably worked on it, is said to be buried in its chapel. Amboise was the scene (1560) of a Huguenot plot against the Guise family. Other old structures in the town include St. Denis Church (12th, 15th, 16th, and 17th cent.), St. Florentine Church (15th cent.), the town hall (16th cent.; restored), and the Clos-Lucé (15th cent.), where Francis I spent part of his youth and where da Vinci lived while in France and where he died.

Below is a picture of Château Amboise. 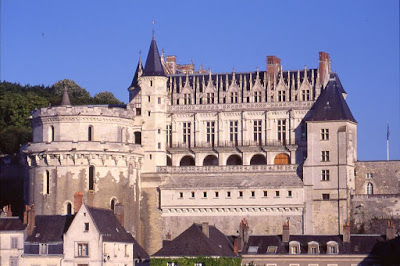