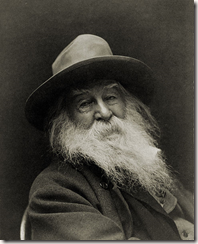 Walt Whitman was a 19th century writer whose life's work, Leaves of Grass, made him one of the first American poets to gain international attention. Whitman spent most of his young life in Brooklyn, where he worked as a printer and newspaper journalist through the 1850s. The first edition of Leaves of Grass was privately printed in 1855 and consisted of 12 untitled poems, one of which was to later become famous as "Song of Myself." His literary style was experimental, a free-verse avalanche in celebration of nature and self that has since been described as the first expression of a distinctly American voice. Although Leaves of Grass did not sell well at first, it became popular in literary circles in Europe and, later, the United States, and Whitman published a total of eight editions during his lifetime. During the Civil War Whitman moved to Washington, D.C., where he served as a civil servant and volunteer nurse. There he published the poetry collections Drum Taps and Sequel to Drum Taps (1865-66), the latter containing his famous elegies for Abraham Lincoln, "Where Lilacs Last in the Dooryard Bloom'd" and "O Captain! My Captain!" In 1873 he was paralyzed after a stroke and moved to Camden, New Jersey. By the time of his death he was an international literary celebrity, and he is considered one of the most influential poets in American literature. 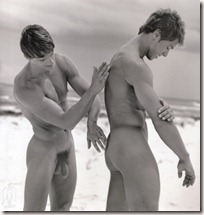 When I heard at the close of the day how I had
been praised in the Capitol, still it was not
a happy night for me that followed,
And else when I caroused – nor when my favorite plans were
accomplished – was I really happy,
But the day when I arose at dawn from the perfect
health, electric, inhaling sweet breath
When I saw the full moon in the west grow pale and 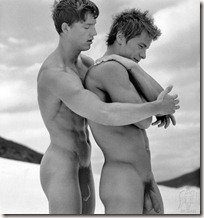 disappear in the morning light,
When I wandered alone over the beach, and undressing, bathed,
laughing with the waters, and saw the sun rise,
And when I thought how my friend, my lover, was on
his way coming, then O I was happy,
Each breath tasted sweeter – and all that day my food
nourished me more – and the beautiful day passed well,
And the next came with equal joy – and with the next, 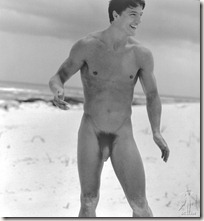 at evening, came my friend,
And that night while all was still I heard the waters roll
slowly continually up the shores,
I heard the hissing rustle of the liquid and sands, as directed
to me, whispering to congratulate me,
For the friend I love lay sleeping by my side,
In the stillness his face was inclined toward me, while the
moon's clear beams shone
And his arm lay lightly over my breast – and that night I was happy.

Whitman's sexuality is sometimes disputed, although often assumed to be bisexual based on his poetry. The concept of heterosexual and homosexual personalities was invented in 1868, and it was not widely promoted until Whitman was an old man. Whitman's poetry depicts love and sexuality in a more earthy, individualistic way common in American culture before the 'medicalisation' of sexuality in the late 1800s. Though Leaves of Grass was often labeled pornographic or obscene, only one critic remarked on its author's presumed sexual activity: in a November 1855 review, Rufus Wilmot Griswold suggested Whitman was guilty of 'that horrible sin not to be mentioned among Christians'. Whitman had intense friendships with many men throughout his life.
Some biographers have claimed that he may not have actually engaged in sexual relationships with men, while others cite letters, journal entries and other sources which they claim as proof of the sexual nature of some of his relationships. 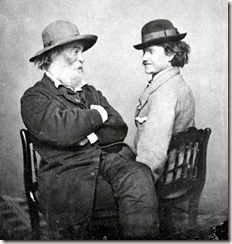 Biographer David S. Reynolds described a man named Peter Doyle as being the most likely candidate for the love of Whitman's life. Doyle was a bus conductor whom he met around 1866. They were inseparable for several years. Interviewed in 1895, Doyle said: 'We were familiar at once — I put my hand on his knee — we understood. He did not get out at the end of the trip — in fact went all the way back with me.' 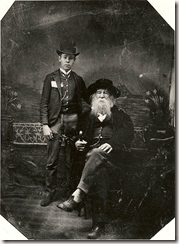 A more direct second-hand account comes from Oscar Wilde. Wilde met Whitman in America in 1882, and wrote to the homosexual rights activist George Cecil Ives that there was 'no doubt' about the great American poet's sexual orientation — 'I have the kiss of Walt Whitman still on my lips,' he boasted. The only explicit description of Whitman's sexual activities is second hand. In 1924 Edward Carpenter, then an old man, described an erotic encounter he had had in his youth with Whitman to Gavin Arthur, who recorded it in detail in his journal. Late in his life, when Whitman was asked outright if his series of Calamus poems were homosexual, he chose not to respond. 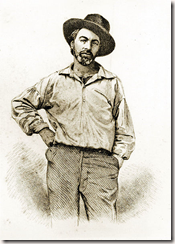 There is also some evidence that Whitman may have had sexual relationships with women. He had a romantic friendship with a New York actress named Ellen Grey in the spring of 1862, but it is not known whether or not it was also sexual. He still had a photo of her decades later when he moved to Camden and referred to her as 'an old sweetheart of mine'. In a letter dated August 21, 1890 he claimed, 'I have had six children - two are dead'. This claim has never been corroborated. Toward the end of his life, he often told stories of previous girlfriends and sweethearts and denied an allegation from the New York Herald that he had 'never had a love affair'.
In any case, Whitman is one of the first truly working-class poets and an iconic figure in gay literature.
Posted by Joe at 12:13 PM

"O Captain! My Captain!" is one of my favorite all time poems. Whenever I read it, I am moved to tears. Surely, many people were distraught at the Lincoln assasination, similarly to how distraught I felt following the John Kennedy assasination.

Walt Witman and Oscar Wilde together... wow. I am enjoying reading these posts, especially about authors I've read.

@Mike-I am very please that you are enjoying these posts. I have many more authors to feature. I hope you will like them as well. Thanks for reading.