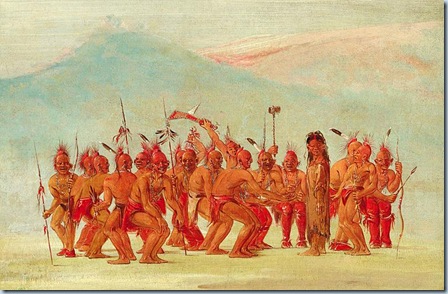 Drawn while on the Great Plains, among the Sac and Fox Indians, the sketch depicts a ceremonial dance to celebrate the two-spirit person.

Gay Native Americans call themselves Two-Spirits and have historically been considered a third sex, though they did not suffer castration, which was not common in the Americas.  Two-Spirit People is an English term that emerged in 1990, out of the third annual inter-tribal Native American/First Nations gay and lesbian conference, in Winnipeg, to describe Native Americans who fulfill one of many mixed gender roles found traditionally among many Native Americans and Canadian First Nations indigenous groups. The mixed gender roles encompassed by the term historically included wearing the clothing and performing the work associated with both men and women.

A direct translation of the Ojibwe term, Niizh manidoowag, "two-spirited" or "two-spirit" is usually used to indicate a person whose body simultaneously houses a masculine spirit and a feminine spirit. The term can also be used more abstractly, to indicate presence of two contrasting human spirits (such as Warrior and Clan Mother) or two contrasting animal spirits (which, depending on the culture, might be Eagle and Coyote); however, these uses, while descriptive of some aboriginal cultural practices and beliefs, depart somewhat from the 1990 purposes of promoting the term.
Prior to western contact, many American Native tribes had third-gender roles. These include "Berdaches" (a derogatory French term for genetic males who assumed a feminine role) and "Passing women" (genetic females who took on a masculine role). The term Berdache in not a Native American word; rather it was a European definition covering a range of third-gender people in different tribes. Not all Native American tribes had Transgender people.

These individuals are often viewed as having two spirits occupying one body. Their dress is usually a mixture of traditionally male and traditionally female articles. They have distinct gender and social roles in their tribes.

Two-spirited individuals perform specific social functions in their communities. In some tribes male-bodied two-spirits held active roles such as: healers or medicine persons, gravediggers, undertakers, handling and burying of the deceased, conduct mourning and sexual rites, conveyers of oral traditions and songs, nurses during war expeditions, foretold the future, conferred lucky names on children or adults, wove, made pottery, made beadwork and quillwork, arranged marriages, made feather regalia for dances, special skills in games of chance, led scalp-dances, and fulfilled special functions in connection with the setting up of the central post for the Sun Dance.

Two-spirit people, specifically male-bodied (biologically male, gender female), could go to war and have access to male activities such as sweat lodges. However, they also took on female roles such as cooking and other domestic responsibilities. It is obvious from the list above that Two-Spirits carried out many of the most important tasks of the tribes.
For more information about Two-Spirits, please visit TWO SPIRIT: GBLT INDIAN NATION.  It is a very interesting article. 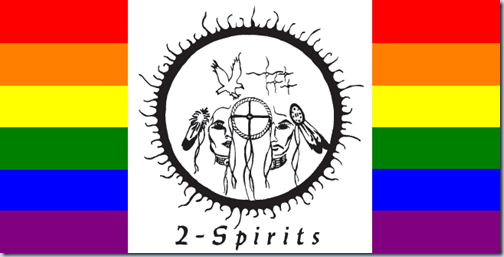 Two-spirited persons amoung Native American tribes appears to be very accepting and open-minded, and not at all considered pathological as in European culture. That they were considered healthproviders and chiefs indicates that they were held in high esteem. There seemed to be nothing wrong with their males performing traditional feminine activities. I wish all cultures were more like that!

I have always felt that the two greatest tragedies of European conquest of Native (North) Americans was: 1) the introduction of disease and 2) the forced conversion from indigenous religions to Christianity. Of course disease killed 90% of the Native American population, but Christianity brought its prejudices with it and caused damage to native cultures. Many of the Native Americans groups today are very fundamentalists and homophobic when it comes to their tribal laws and customs. They consider themselves traditionalists, when they are anything but.

I specifically put Native North Americans, because the native empires of Central and South America (Aztec, Inca, etc.) were not as tolerant of homosexuality. Therefore, I think homophobia comes with empire, not religion, because homosexuals tend not to procreate, therefore they are not increasing the population and thus not increasing the number of soldiers to further the conquest of empire. I'll to a thought post on this soon on this theory, where I will hash it out more, and hopefully get a discussion going.

More complicated than that, but basically there are still a LOT of cultural differences from mainstream gay culture. A LOT of things are taboo. And a lot of gay academics also hold nationalism as the cause of all the world's evils; where does that leave us?