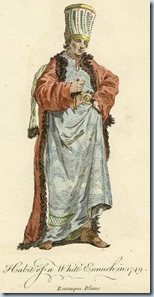 When castrated, some eunuchs only had their testicles removed, and they would most certainly fall into the category of cocks and asses only, but many time in the ancient world, eunuchs suffered full castration and their testicles and penis were removed. It is not something that I think any man really relishes the thought of, but that I have always found particularly fascinating.
The word eunuch [from the Greek meaning keeper of the couch] does not 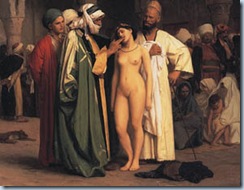 derive, as one might think, from the operation that produced a eunuch but rather from one of his functions. Eunuch goes back to the Greek word eunoukhos, "a castrated person employed to take charge of the women of a harem and act as chamberlain." The Greek word is derived from eunē, "bed," and ekhein, "to keep." A eunuch, of course, was ideally suited to guard the bedchamber of women. From remote antiquity on, eunuchs were employed in the Middle East and China as guards and servants in harems or other women's quarters and as chamberlains to kings. The eunuchs' confidential position frequently enabled them to exercise an important influence over their royal masters. Many of the patriarchs of Constantinople during Byzantine times were eunuchs. Eunuch advisers disappeared as a class only with the end of the Ottoman Empire.
The title of this post comes from the notion that eunuchs made up a “third sex.” 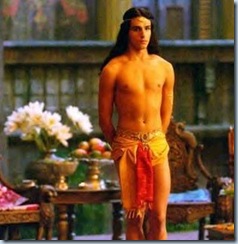 Third gender or third sex refer to a gender category present in almost all indigenous/ non-Western societies, of people who are considered neither completely male, nor completely female. It is a gender identity separate from 'men' and 'women,' of people considered to be the intermediate sex; in-betweens (like the androgynes) or neutrals (like the agendered).  In some indigenous societies such as the Native North Americans, the third sex, or two-spirits, took on roles of their other non-physical gender. In western culture were many such men and women were shunned, discriminated against, or often persecuted, a third sex never really developed, except within the community of eunuchs.  Eunuchs were seen as no longer being male, but they were also not female, because they did not possess female sex organs.  Therefore eunuchs in western culture became a third sex, one that was no longer considered male, had similar legal status as women, and were often slaves, even when they held important positions within the governments of the ancient world.  The eunuch Bagoas was supposedly a lover of Alexander the Great.  Bagoas (in Old Persian Bagoi) was a eunuch in the Persian Empire in the 4th Century BCE, said to have been the catamite (a boy who has a sexual relationship with a man) of both Darius, and later Alexander the Great.
The Hijra of India (click on the picture below, “Tejal Shah” for information about the photo and it’s meaning) are probably the most well known and populous third sex type in the modern world — Mumbai-based community health organisation The Humsafar Trust estimates there are between 5 and 6 million hijras in India. In different areas they are known as Aravani/Aruvani or Jogappa. Often (somewhat misleadingly) called eunuchs 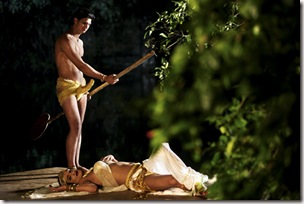 in English, they may be born intersex or apparently male, dress in feminine clothes and generally see themselves as neither men nor women. Only eight percent of hijras visiting Humsafar clinics are nirwaan (castrated). Indian photographer Dayanita Singh writes about her friendship with a Hijra, Mona Ahmed, and their two different societies' beliefs about gender: "When I once asked her if she would like to go to Singapore for a sex change operation, she told me, 'You really do not understand. I am the third sex, not a man trying to be a woman. It is your society's problem that you only recognize two sexes.'" Hijra social movements have campaigned for recognition as a third sex, and in 2005, Indian passport application forms were updated with three gender options: M, F, and E (for male, female, and eunuch, respectively). Some Indian languages such as Sanskrit have three gender options. In November 2009, India agreed to list eunuchs and transgender people as "others", distinct from males and females, in voting rolls and voter identity cards.
In addition to the feminine role of hijras, which is widespread across the subcontinent, a few occurrences of institutionalized "female masculinity" have been noted in modern India. Among the Gaddhi in the foothills of the Himalayas, some girls adopt a role as a sadhin, renouncing marriage, and dressing and working as men, but retaining female names and pronouns. A late-nineteenth century anthropologist noted the existence of a similar role in Madras, that of the basivi. However, historian Walter Penrose concludes that in both cases "their status is perhaps more 'transgendered' than 'third-gendered.'"

We will begin our lessons on eunuchs and the third sex this week, and I hope you will find it interesting and informative as we delve into this mysterious topic.