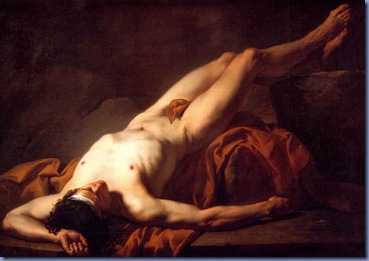 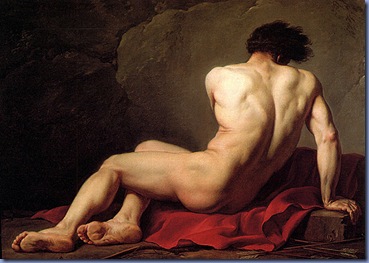 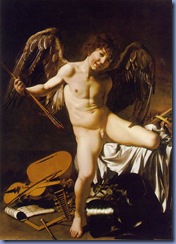 idealized form of body and Christian spirit, Caravaggio was known for his ability to realistically capture moments of human emotion, often in violent depictions of Christianity's sacred stories. Caravaggio apprenticed in Milan, and in the early 1590s made his way to Rome. He made a splash in Rome, first with collectors and other artists, then with commissions from the Vatican, including The Calling of Saint Matthew and The Martyrdom of Saint Matthew. By all accounts Caravaggio was a belligerent cuss, and  his brief career as a famous artist is marked by episodes of violent behavior and trouble with the law. After killing a man in Rome in 1606 he was on the lam, finding haven in Naples, Malta and Sicily, where his extraordinary talent and 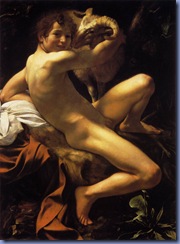 society connections bailed him out of one scrape after another. Along the way, he mastered chiaroscuro, the technique of bringing contrasted light images from shadowy backgrounds, and pioneered the modern tradition of Realism -- "painting what you see" -- using techniques that remain a mystery. Caravaggio also painted his subjects live, directly onto the canvas, without the use of carefully planned drawings, unlike the masters of his era. Caravaggio was popular -- and notorious -- during his lifetime, but his reputation in the history books suffered until the 20th century, when modern critics agreed that he'd changed the face of Western art and influenced greats such as Rubens, Rembrandt and Vermeer.

Since the 1970s art scholars and gender studies scholars have debated the homoeroticism of Caravaggio's art, but there is very little evidence from his own time regarding his sexuality. A 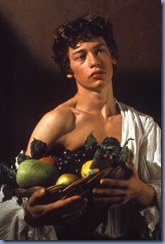 connection with a certain Lena is mentioned in a 1605 court document (the complainant Pasqualone is speaking): "I didn't see who wounded me, but I never had disputes with anybody but the said Michelangelo (i.e., Caravaggio). A few nights ago he and I had words on the Corso on account of a girl called Lena who is to be found in Piazza Navona, past the palace of Mr. Sertorio Teofilo. She is Michelangelo's girl. Please, excuse me quickly, that I may dress my wounds." The biographer Passeri, however, writing about the incident some seventy years later, implies that although Lena was Caravaggio's friend and model there was no sexual relationship between them, and that Caravaggio was, on the contrary, taking revenge on Pasqualone for impugning his behavior with her.

The sole other piece of evidence comes from the libel trial  brought against Caravaggio by Baglione in 1603. Baglione 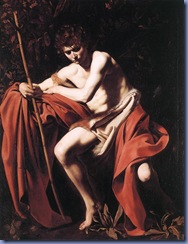 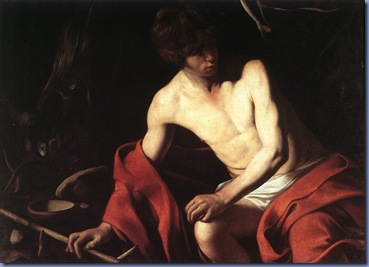