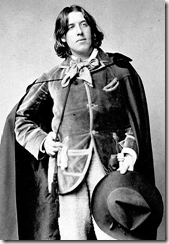 Oscar Wilde was an 19th century Irish writer whose works include the play The Importance of Being Earnest and the novel The Picture of Dorian Gray. He is also one of the Victorian era's most famous dandies, a wit whose good-humored disdain for convention became less favored after he was jailed for homosexuality. Wilde grew up in a prosperous family and distinguished himself at Dublin's Trinity College and London's Oxford. He published his first volume of poems in 1881 and found work in England as a critic and lecturer, but it was his socializing (and self-promotion) that made him famous, even before the 1890 publication of The Picture of Dorian Gray. In 1895, at the height of his popularity, his relationship with the young poet Lord Alfred Douglas was declared inappropriately intimate by 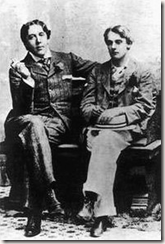 Douglas's father, the Marquess of Queensberry.  Wilde sued for libel, but the tables were turned when it became clear there was enough evidence to charge Wilde with "gross indecency" for his homosexual relationships. He was convicted and spent two years in jail, after which he went into self-imposed exile in France, bankrupt and in ill health. His other works include the comedies Lady Windermere's Fan (1892), A Woman of No Importance (1893) and An Ideal Husband (1895), several collections of children's stories and the French drama Salomé (1896).
The phrase "the Love that dare not speak its name" comes from a poem by Lord Alfred Douglas, and when questioned about its meaning in open court, Wilde gave an impassioned speech on the value of male love (See the quote below the video). One of Wilde's most famous quotes: "There is only one thing in life worse than being talked about, and that is not being talked about."


On being cross-examined at his trialMr. C. F. Gill (cross-examining): What is “the love that dares not speak its name?”
Wilde: “The love that dares not speak its name” in this century is such a great affection of an elder for a younger man as there was between David and Jonathan, such as Plato made the very basis of his philosophy, and such as you find in the sonnets of Michelangelo and Shakespeare. It is that deep spiritual affection that is as pure as it is perfect. It dictates and pervades great works of art, like those of Shakespeare and Michelangelo, and those two letters of mine, such as they are. It is in this century misunderstood, so much misunderstood that it may be described as “The love that dares not speak its name,” and on that account of it I am placed where I am now. It is beautiful, it is fine, it is the noblest form of affection. There is nothing unnatural about it. It is intellectual, and it repeatedly exists between an older and a younger man, when the older man has intellect, and the younger man has all the joy, hope and glamour of life before him. That it should be so, the world does not understand. The world mocks at it, and sometimes puts one in the pillory for it.